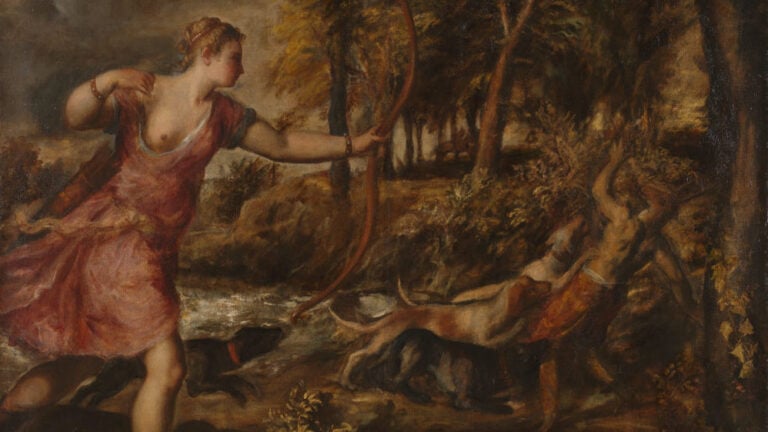 A whistle-stop tour of each of the seven Poesies, which the Renaissance master delivered Philip II of Spain in the 1550s and early 1560s, finally reaches it's conclusion with Titian's The Death of Actaeon.

Revised style and an unsent Poesie

Intriguingly, The Death of Actaeon never actually made its way to the king. For some reason or another it remained in the artists' studio until his death in 1576. In later life Titian began to revise his own style, and we can see this change, such as a more liberal use of brush strokes, in this painting which continues the story of Actaeon's punishment from the painting Diana and Actaeon.

"But when he sees his head and horns reflected for certain in the water, he tries to say ‘Oh, look at me!’ but no voice follows. He groans: that is his voice, and tears run down his altered face. Only his mind remains unchanged. What can he do? Shall he return to his home and the royal palace, or lie hidden in the woods? Shame prevents the one, and fear the other. While he hesitates his dogs catch sight of him."

And that's all folks! We've surveyed every single Poesie sent to the King Phillip II of Spain by Titian and explored a range of stories from the Roman poet Ovid. You can find links to all the articles in this series here:

Introduction to Titian and the Poesies