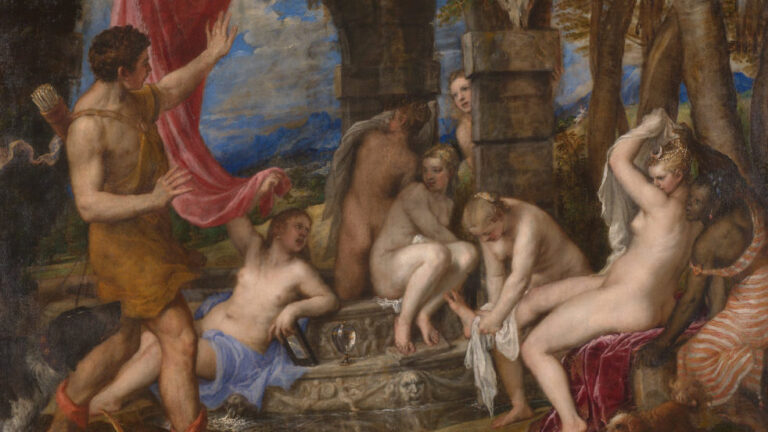 In a series of articles we are meeting each of the seven Poesies, which Titian delivered Phillip II of Spain in the 1550s and early 1560s. So far we have encountered the stories of Danaë, Venus and Adonis, Perseus and Andromeda, and The Rape of Europa. Every painting-poem translated a small section of the Epic poem Metamorphoses, by the Roman poet Ovid. Today’s Poesie, and the next and the last, all revolve around stories about the goddess Diana. First up, Actaeon:

Beware: do not look at naked Diana!

“While Diana is bathing there, in her accustomed place, Cadmus’s grandson, free of his share of the labour, strays with aimless steps through the strange wood, and enters the sacred grove. So the fates would have it.”

Diana is on the right-hand side; she is wearing a half-moon diadem and sitting on some luxurious velvet whilst having her feet washed. She shields her naked body from Actaeon. Titian makes her anger clear and contrasts it with the concerned expression of the nymph closest to the blundering intruder. The pool of water is still and reflective but not for long, as the goddess splashes it into Actaeon’s face: The skull foreshadows the outcome because the splash transforms Actaeon into a stag and he will then be ripped apart by his own hunting-dogs.

Unlike the preceding scenes this Poesie shows both a male victim and multiple female nudes, rather than just one. Like Adonis, Actaeon is an unlucky hunter, but unlike Adonis he does not find favour with a goddess.

Diana and Actaeon showcases Titian’s dexterity at composing the female nude. This is ironic considering that the painting tells a story where a viewer is punished for seeing nudity.

1. The female nude, which would be hard to miss.