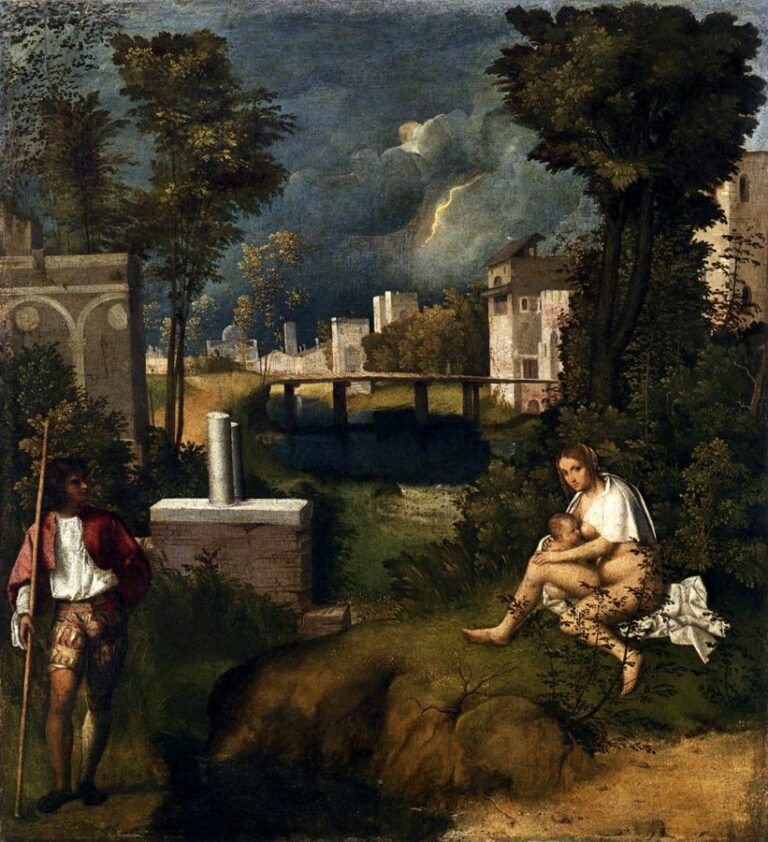 Painting of the Week: Giorgione, The Tempest

The Most Pioneering Painters of the Venetian Renaissance

Giorgione was an Italian painter from Venice whose career was cut off by his death at a little over 30. And that is a problem – everyone knows his pal, Titian, who lived for nearly 90 years, but nobody remembers Giorgione. And you must understand that Giorgione was an absolute rock star of High Renaissance art. This is all the stuff you need to know about him:

1. He was called Big George

His name sometimes appears in the sources as Zorzo. The variant Giorgione (or Zorzon) may be translated as “Big George.”

2. He met other rock stars of his times – including Leonardo da Vinci

Giorgione met Leonardo da Vinci on the occasion of the Tuscan master’s visit to Venice in 1500. Around the same time as Leonardo, Giorgione began to use the very refined chiaroscuro called sfumato – the delicate use of shades of color to depict light and perspective. It can be seen on the face of a Young Man with Arrow from Kunsthistorisches Museum in Vienna – he looks very much like a da Vinci, doesn’t he?

3. He was roommates with Titian

Giorgione was very closely associated with Titian. The famous chronicler of the Renaissance, Giorgio Vasari, says Giorgione was Titian’s master. In contrast, another art historian, Ridolfi, says they both were pupils of Giovanni Bellini and lived in his house. They worked together on the Fondaco dei Tedeschi frescoes, and Titian finished at least some of Giorgione’s paintings after his death. However, which ones Titian finished still remains very controversial – usually, the attributions of the paintings change every couple of years.

The Renaissance loved nudes. After strict Middle-Age morality, the artists were finally able to present human bodies in all their glory. But, of course, the proper subject was needed here, and the goddess of beauty, Venus, was a perfect fit. In Giorgione’s painting, a nude’s profile seems to follow that of the hills in the background. It is a classic Venetian nude. It seems that Giorgione’s appetite for female beauty was considerably bigger but yet more delicate than any other painter before or after him.

5. He liked weird subjects no one understands now

The Tempest is one of the most mysterious paintings in art history (and one of my favorites). There is a sitting woman who is suckling a baby. She could be a gypsy or a prostitute. Her pose is unusual – typically, the baby would be held on the mother’s lap, but in this case, the baby is positioned on the mother’s side to expose her pubic area. A man is possibly a soldier as he is holding a pike. The X-rays of the painting have revealed that before in this place, Giorgione originally painted another female nude. Another fun fact: this painting is considered the first landscape in the history of Western art.

6. Only 40 of his paintings survived until now – and we should put a question mark here

The counter of Giorgione’s works stopped at number 40 – although even the Sleeping Venus, that quintessentially Giorgionesque work, has its radical doubters who see it as entirely Titianesque. There are people walking on this planet who doubt Giorgione’s very existence (conspiracy theorists!). Whatever. The resulting uncertainty about the identity and meaning of his art has made Giorgione one of the most mysterious figures in European painting.