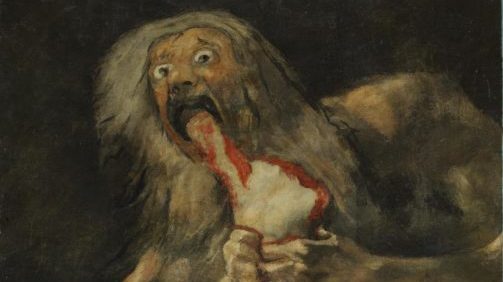 Goya was not a happy man when he painted Saturn Devouring His Son, some time between 1819 and 1823. By the time he created this painting, illness had made him deaf and his wife was dying, enough for any man to overcome. Goya also lived through the invasion of Napoleon’s troops and awful sights of the Spanish civil wars, inspiring his The Disasters of War series, created between 1810 and 1820.

These
etchings or aquatint line-pictures
are created as plates to be recreated many times over but were never made available
during his life – for their obvious disdain for the ruling class’s culpability
for the wars.

Trust me, this image is not the worst of
them.

The latter Disasters of War etchings depict a shift from depicting human wrong-doings onto allegories of war, picturing not the actions of war but instead representation of evil and a more whimsical and imaginative approach to his protestation.

Whilst those prints rendered awful images of war and torture, it is the psychology of Saturn Devouring his Son that best captures the mind-set of the painter in his latter phases. As part of Goya’s ‘Black Period’, the painting is part of a set that originally hung from the walls in his home in Madrid, depicting fearful images that would stare down at him as he went about his day. Personally speaking, the painting is most impressive for its Modernist aspects, eighty years or more before the likes of Munch’s Scream (1893): one could imagine the two paintings facing each other as one responds to the horror in the other.

The painting depicts the Greek God Kronus (Saturn) and his answer to a prophecy that one of his children would overthrow him as king; his answer is to eat them!?! His wife Ops eventually tricks Saturn and the prophecy comes true, his son Jupiter survives the threat of being eaten and returns to usurp Saturn.

The Spanish artist’s earlier works had very much fitted in with the classical style of the late 18th century with beautiful works such as The Parasol (1777) and Blind Man’s Buff (1788).

The Parasol is in such contrast with Saturn Devouring his Son that one could imagine that they are not just from two different eras but that they are from different artists. One of the most distinctive differences in his technique is the brightness of the painting, with the blue sky in the background illuminating their elegant garments and enhancing the three dimensional aspect through the artists use of shading contrasts, referred to as chiaroscuro. The painting is so life-like because of Goya’s Classical techniques in recreating the scene, reminiscent of Renaissance artist Raphael. The use of ‘tenebrism’ in the horrific Saturn Devouring his Son is a similar technique but with a much more stark contrast between the blacks in the background and the figures set in “spotlight” in the foreground of the painting, more comparable with Baroque artist Caravaggio. The painting is quite diminished from its original state having been removed from the wall in his house but the raw technique is retained; the lack of fine detail that would normally be characteristic of Goya’s art seems to only enhance the terror of the imagery.

Goya was appointed Director of the Royal Academy in 1795 and went on to achieve the position of Primer Pintor de Cámara, the highest status a painter could achieve in the Spanish hierarchy, but his successes could still not cheer up this poor unfortunate artist. Stare into the eyes of Saturn and perhaps one sees a mirror of Goya’s inner turmoil, a soul mired by deafness, death, war, and a painter’s arm all too able to embody them through the allegory of Saturn and his hunger for power.

I personally cannot look at the image for
much longer than a few seconds.