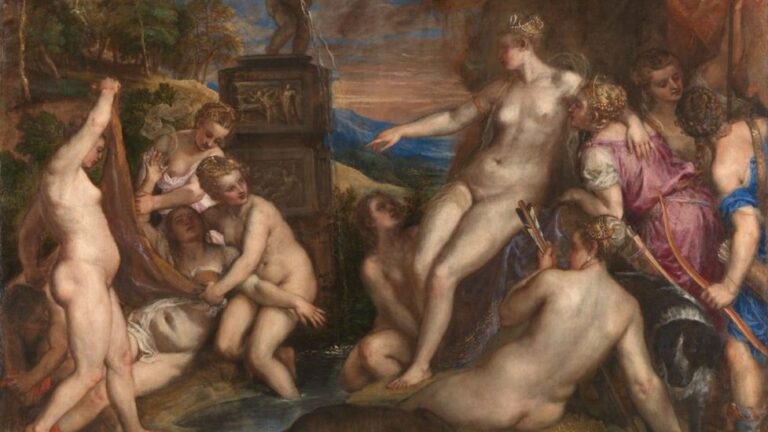 In a series of articles we are meeting each of the seven Poesies, which Titian delivered Phillip II of Spain in the 1550s and early 1560s. So far we have encountered the stories of Danaë, Venus and Adonis, Perseus and Andromeda, The Rape of Europa and Diana and Actaeon. Today's Poesie, Diana and Callisto, previous and the final one, all revolve around stories about the goddess Diana. This one is particularly exciting because it completes a pair with Diana and Actaeon.

The Story of Callisto

Callisto is a nymph who has been raped by Jupiter and is now pregnant. However, being a follower of Diana she should be a virgin. The other nymphs reveal the pregnant belly to the virgin-goddess, who then orders Callisto into exile.

"Nine crescent moons had since grown full when the goddess faint from the chase in her brother’s hot sunlight found a cool grove out .... "let’s bathe our bodies naked in the flowing water." Callisto blushed: all of them took off their clothes: one of them tried to delay: hesitantly the tunic was removed and there her shame was revealed with her naked body. Terrified she tried to conceal her swollen belly. Diana cried ‘Go, far away from here: do not pollute the sacred fountain!’ and the Moon-goddess commanded her to leave her band of followers."

Once again, the scene abounds with female nudes and Titian has the opportunity to portray a pregnant belly and he chooses to make it fairly grotesque. Like in Diana and Actaeon the gaze of each figure is in a different direction and holds a very individual expression.

1. The female nude, which would be hard to miss.

Their greatest feat however is the way Titian captures the drama of the stories from Metamorphoses. Each Poesie focuses on the moment just before the climax. They are incredible to behold even if you don't know the myth behind them and can even captivate and engage the most astute viewer because of their specificity to the Ovidian poem.

They're marvelous as stand-alone paintings, in pairs and as a set. Taken as duos the paintings often mirror each other visually.