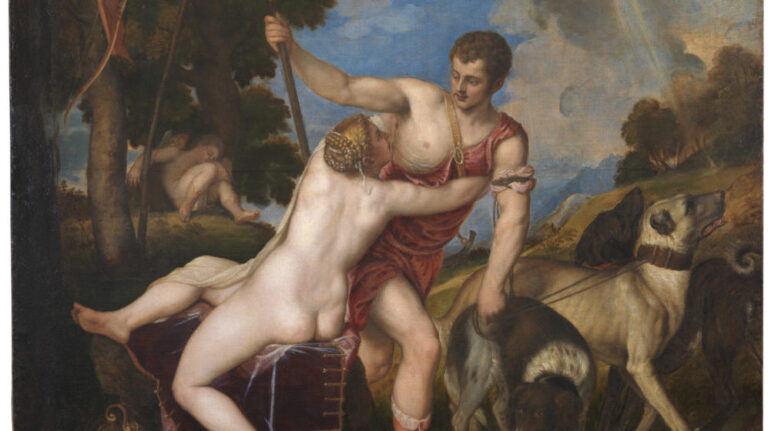 In a series of articles we are going to meet each of the seven Poesies, which Titian delivered Phillip II of Spain in the 1550s and early 1560s. Every painting-poem translated a small section of the Epic poem Metamorphoses, by the Roman poet Ovid. We have already met Danaë and today we will hear the story of Venus and Adonis.

The Story of the Myth

Although the god of love (Cupid) is absent from the first Poesie, the ultimate goddess of love (Venus, Cupid’s mightier mother) is center stage in the next. The mortal hunter, Adonis, is being accosted by nude Venus. In the background Cupid is sleeping – while Love herself is busy it is time for everyone else to rest. More importantly, we see Cupid’s bow and arrows hung on the tree. In the myth the cause of Venus’ unlikely infatuation with a human is that she had been accidentally stung by the arrow of love.

Venus has told Adonis, who was off hunting, to be careful of lions and boars because they have a grudge against her. Adonis asks why and Venus says:

“But now the unaccustomed effort tires me, and, look, a poplar tree entices us with its welcome shade, and the turf yields a bed. I should like to rest here on the ground,” (and she rested) “with you.” She hugged the grass, and him, and leaning her head against the breast of the reclining youth, she spoke these words, interspersing them with kisses.”

Despite listening to her warning tale, Adonis still goes out for the hunt and does get gored by a boar. Perhaps, then, the sleeping Cupid is also a symbol of Adonis’ ignorance to Venus’ entreaties?

The Beautiful Bottom of Venus

Four things to look out for in the Poesies: