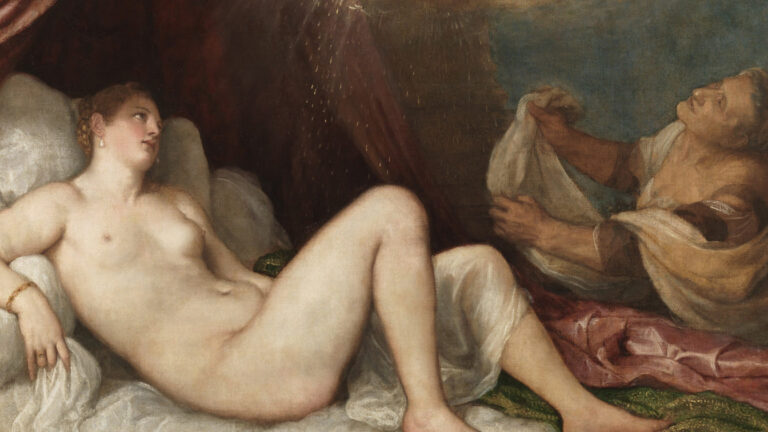 In a series of articles we are going to meet each of the seven Poesies, which Titian delivered Phillip II of Spain in the 1550s and early 1560s. Every painting-poem translated a small section of the Epic poem Metamorphoses, by Roman poet Ovid, and Titian started with Danaë (1549-50).

Danaë and the Shower of Gold

Danaë was a princess of Argos and only child. Once upon a time, a prophesy said that her son would go on to kill his grandfather. Consequently Danaë’s father locked her away. However, the god Jupiter turned himself into a shower of gold in order to have sex with her, and the Greco-Roman gods always impregnate the women they have sex with. Danaë ‘s child Perseus goes on to behead Medusa and use it to turn his grandfather to stone.

Titian’s retelling shows the part of the myth with the shower of gold, also the only part of the story mentioned in Ovid (chapter IV). Titian had in fact painted the composition at least six times between 1544 and the 1560s but scholars now agree that the version which now resides in The Wellington Collection (London) was the one sent to Philip. Rather than Cupid approaching Danaë it is an old maid, and there is no draping on her upper thigh as in other versions.

The painting is quite dirty and so it is hard to make out Titian’s beautiful colours. The version from the 1560s helps to clarify things:

Stay tuned to find out about Titian’s second Poesie, Venus and Adonis (1554).

Remember, here are four things to look out for in the Poesies: