Mantegna and Bellini – Brothers in Art?

With this exhibition, the National Gallery in London aims to explore the artistic relationship between Andrea Mantegna and Giovanni Bellini. The artists were bound by family ties, Bellini’s sister married Mantegna in 1453, they were also both influenced by Jacopo Bellini while they were still developing as artists.

The exhibition is situated in the Sainsbury Wing temporary exhibition space, so the layout is no surprise to those that have been here before. The first room, as space, is specifically designed to provide the initial proverbial earthquake starting the show. We enter a dark space with early paintings by both artists, the most interesting being a pair of Presentations at the Temple. We are tempted to find the ten differences, but once found, those differences, that are extremely subtle in this pair of paintings, will come back to us a lot stronger in the next rooms. [caption id="attachment_17763" align="aligncenter" width="1000"]

Andrea Mantegna, The Presentation of Christ in the Temple, about 1454, Gemäldegalerie, Staatliche Museen zu Berlin[/caption] The subsequent rooms are organized by topic, but also loosely follow the chronology. They cover religious paintings of both artists, then move on to their interests in antiquity, landscape and finish with portraits. This way we get a glimpse of their oeuvre that should allow us to understand the relationship between them. In the first few rooms, the paintings are interspersed with graphics, which helps to create a rhythm of interacting with them but may be challenging if you visit at a busy time. The problem arises probably as soon as room three and escalates from there. As the first room sets us in the frame of mind to look for differences and similarities, we are not looking at the works in their own right, they exist in this environment only in a relationship to one another. It is fascinating initially, the three versions of Descent into Limbo kept me in place for a while. [caption id="attachment_17762" align="aligncenter" width="1000"] 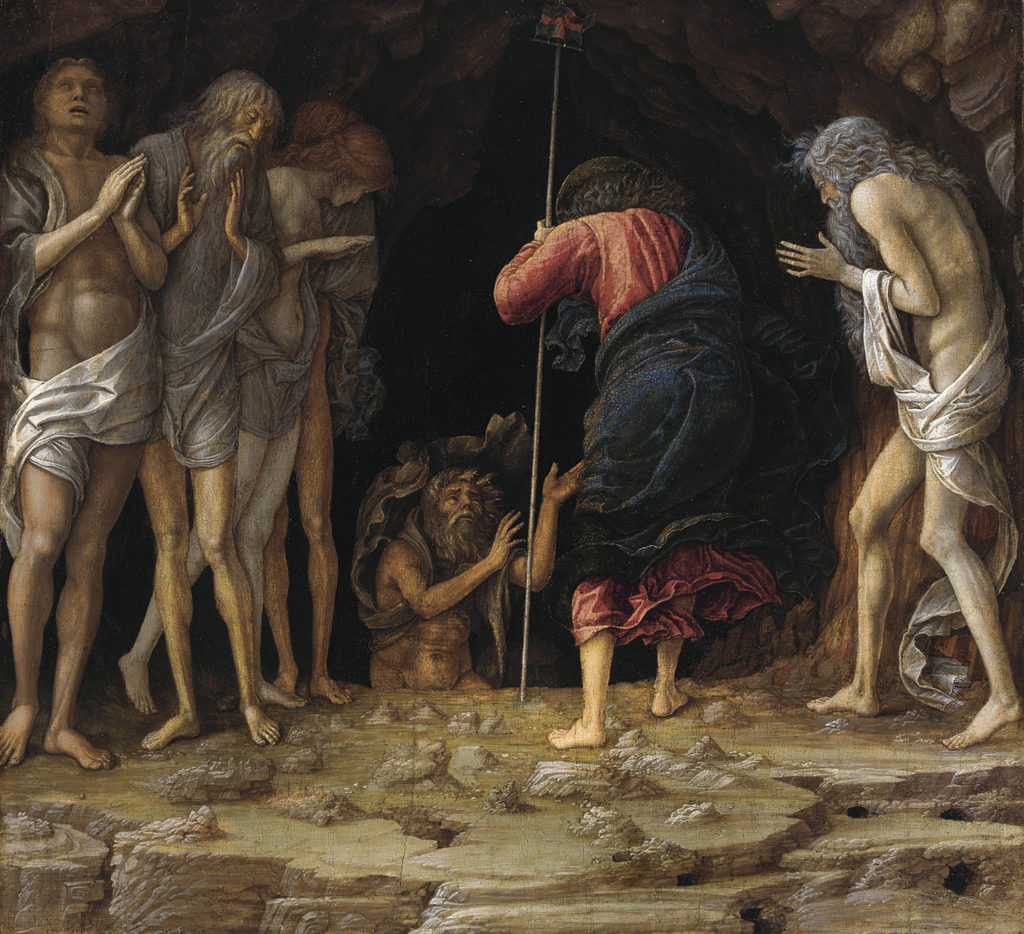 Giovanni Bellini, The Descent of Christ into Limbo, 1475–80, © Bristol Museum and Art Gallery, UK - Bridgeman Images[/caption] However, as we progress to further rooms the differences are obvious, I caught myself repeating the same adjectives over and over: sculptural, sharp, harsh, emotional, detailed, soft, sensitive, broad, metaphorical. As time passes and the artists’ relationship loosens, those differences grow, and the goal of the exhibition becomes a bit blurry. There is not much similarity to find, we are looking at works of two independent artists, who created their own individual style and did not even compete. [caption id="attachment_17765" align="aligncenter" width="1000"]

Giovanni Bellini, with later additions by Dosso Dossi and Titian, The Feast of the Gods, 1514–29, National Gallery of Art, Washington, DC, Image courtesy of the Board of Trustees, National Gallery of Art, Washington, DC.[/caption] As we get to the last room the show redeems itself, the portraits by both artists have nothing in common and finally our brain tired by constant comparing and contrasting is able to look at them individually. It is difficult not to look individually at a painting as exquisite as the Doge Leonardo Loredan. [caption id="attachment_17767" align="aligncenter" width="600"]

Andrea Mantegna, Cardinal Ludovico Trevisan, 1459–60, Gemäldegalerie, Staatliche Museen zu Berlin © Staatliche Museen zu Berlin, Gemäldegalerie - Photo Jörg P. Anders[/caption] The exhibition’s goal was ambitious, and I think it is only partially achieved for a regular visitor. It was a very academic endeavour and it is executed in an academic way, expecting a lot from the viewer it may become difficult to take in. The works assembled here require time and space to think them through, and those two commodities are scarce in the National Gallery. This exhibition is a challenge, but one worth the effort and maybe even a preparation in advance, as many of those painting may not be seen side by side for many years to come.

Other fun things to read:

The Mystery Of Mantegna Tarocchi

Why Is St Sebastian A Gay Icon?