Salvador Dali and His Burning Giraffes 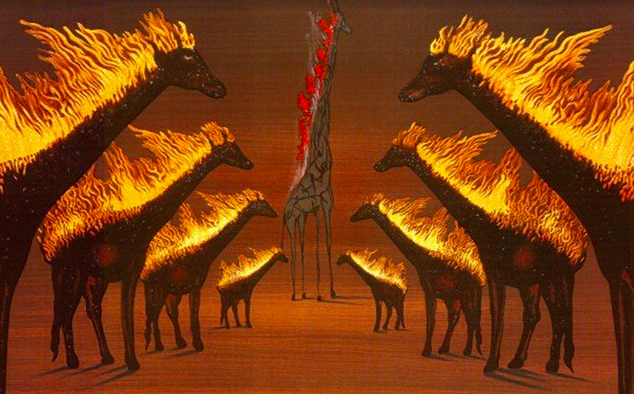 The Burning Giraffe is one of Salvador Dalí’s most famous paintings but the motif did not appear only in this one work. Today we will show you all the burning giraffes in Salvador Dali’s paintings!

The Burning Giraffe was created in 1937, when the artist was still in Europe, before his 8 year long exile in the United States. In 1937, the Spanish Civil War (the bloody precursor to World War II) was ongoing. This was the event that caused Dali’s migration.

In this conflict, which took place from 1936 to 1939, two sides were fighting; the Republicans, who were loyal to the democratic, left-leaning and relatively urban Second Spanish Republic, in an alliance of convenience with the Anarchists and Communists, fought against the Nationalists, a Falangist, Carlist, Catholic, and largely aristocratic conservative group led by General Francisco Franco. Do you remember Guernica by Pablo Picasso? The bomb attack depicted there happened during this war.

The giraffe can be seen in the background with its back on fire. Compared to the rest elements of the painting, it’s quite small. Dalí first used the burning giraffe image in his 1930 film L’Âge d’Or (The Golden Age). It appears again in 1937 in the painting Inventions of the Monsters.

Dalí described the giraffe as “the masculine cosmic apocalyptic monster.” Later he believed it to be a premonition of World War II. Dalí will come back to the motif much later, in a 1975 work in pastel and water color, Burning Giraffes in Brown, also known as Giraffe Avignon.

However, we should start talking about this painting with the story of the relation Dalí had to Freud. He considered the psychoanalytical method as an enormous step forward for civilization:

The only difference between immortal Greece and our era is Sigmund Freud who discovered that the human body, which in Greek times was merely neoplatonic, is now filled with secret drawers only to be opened through psychoanalysis.

The opened drawers in the blue female figure was, according to Dalí, a “tail bone woman” and they refer to the inner, subconscious within man. In Dalí’s own words, his paintings form “a kind of allegory which serves to illustrate a certain insight, to follow the numerous narcissistic smells which ascend from each of our drawers.”. Both female figures have undefined phallic shapes (perhaps melted clocks, as a recurring image from Dalí’s previous works) protruding from their backs, which are supported by crutch-like objects. The hands, forearms, and face of the nearest figure are stripped down to the muscular tissue beneath the skin. The smaller figure holds what appears to be a piece of flesh in her hand, a device also present in The Great Masturbator (1929). Raw meat is seen as the call for a return to primitive nature, a rediscovery of the inner being.

Both humans that double as chests of drawers as well as crutches are common motifs seen in many of his works, like in Sleep (1937) and in The Ghost of Vermeer of Delft Which Can Be Used As a Table (1934). In this painting, the crutches are clearly masculine in nature, representing a patriarchal system which many believed women would be helpless without. They are phallic in essence, male dominance over the bodies of women.

The Burning Giraffe is like a warning to the world about the possibilities of war. The only hope is that humanity can be saved through psychoanalysis – by opening the chest of drawers present in the mind to understand the secrets of the human body which is the combination of female and male treats. The hope is directly connected the number of crutches found on the two women like figures. The main figure has many drawers and fewer crutches to hold her up; meanwhile the other figure has many crutches without any drawers, making her hopeless.