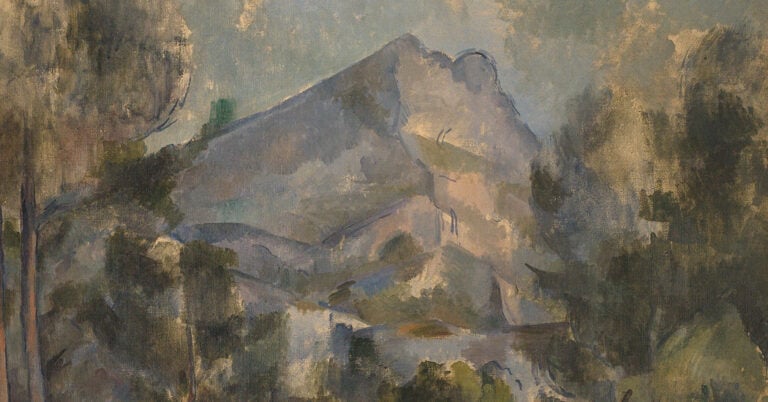 Kunstmuseum Bern in Switzerland  has put a new painting on view on Tuesday – a Cézanne from the notorious Nazi-looted art trove of Cornelius Gurlitt.

The painting, La Montagne Sainte-Victoire (1897) went on view for the first time since before the World War 2, following an agreement between Switzerland and Philippe Cézanne, the artist’s grandson. The painting is one of the most famous of the trove of Nazi-looted works found in the Munich home of Cornelius Gurlitt during 2012 raids, caused by an investigation into tax evasion. Gurlitt’s father Hildebrand Gurlitt was a famous Nazi dealer who bought works that had been plundered from Jews or sold by Jews desperate to leave Germany.

The detailed story of this particular Cézanne, however, remains unknown. It was untraceable after 1940—up until then, it had been in the possession of Cézanne’s family. According to Nina Zimmer, the director of the Kunstmuseum Bern, the work was confiscated by the Nazis in Paris, but then returned to the owners, who were not persecuted by the Nazis.

Gurlitt had bequeathed the Cézanne and over 1400 other works to the Kunstmuseum Bern following his 2014 death, and a selection from the bequest was first displayed in the fall of 2017. In exchange for acknowledging that the Kunstmuseum Bern owns the work after it was willed to them by Gurlitt, Philippe Cézanne earned the right to put it on view at the Musée Granet in Aix-en-Provence, where the artist lived.

The other works found in Gurlitt’s apartment and in his Salzburg house included those that were deemed “degenerate” by the Nazis or those stolen from Jews. Also among the collection of paintings, drawings and sketches were works by Max Beckmann,  Edvard Munch, Monet, Cézanne, Renoir, Otto Dix and many many more.

In 2015, Uta Werner, a cousin of Gurlitt, challenged the will and staked her claim to the art collection. Werner claimed that Gurlitt was not mentally fit when he wrote his will just before his death. The court rejected Werner’s argument. The collection estimated to be worth $1.4 billion.

Now the Cézanne and some pieces of the collection make part of the second part of the exhibition Gurlitt: Status Report.