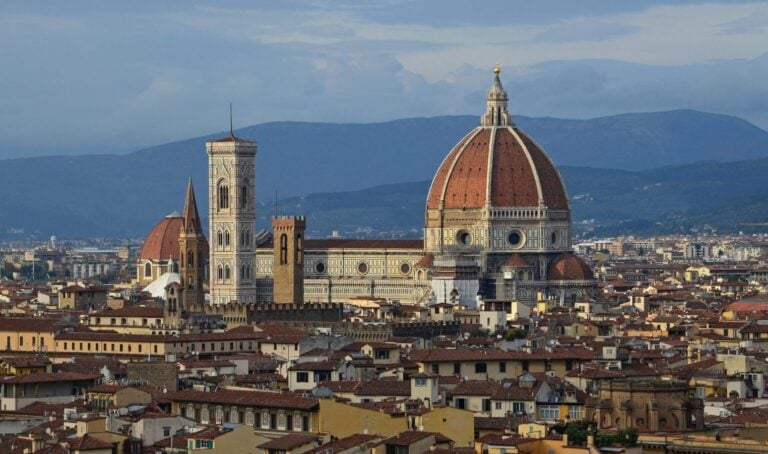 Duomo of Florence, as seen from Piazzale Michelangelo in 2016, Florence, Italy. Photo by Clement Bardot via Wikimedia Commons. (CC-BY-SA-4.0)

Cattedrale di Santa Maria del Fiore, or the Duomo of Florence, along with Giotto’s Campanile and Baptistery of Saint John are designated UNESCO World Heritage sites and are among the world’s most breathtaking architectural ensembles. Established in Piazza del Duomo (cathedral square) in the historical city of Florence in Italy, these structures stand as yet another grand testament to human excellence. Throughout the façade and within the walls of these marvelous structures are the works of some of the most venerated names in art history.

Location of the Duomo

The city of Florence commissioned a cathedral to commemorate its growing influence in the medieval period. Although the construction of the Duomo in its present form commenced in the year 1296, the Church of Santa Reparata stood in its location with roots dating back as early as 394 CE. Some remnants of the original structure, including Roman mosaics, have been preserved as a reminder of Florence’s ancient roots.

Commission of the Duomo

The construction was first assigned to Arnolfo di Cambi and passed through many capable hands such as Giotto di Bondone, Andrea Pisano, Francesco Talenti, and of course, Filippo Brunelleschi who gave it its crowning glory in 1420. The Duomo was consecrated in 1436 by Pope Eugene IV, though the iconic façade was only completed in 1875 by Emilio de Fabris. A section of the dome’s gallery remains incomplete today. Although the Duomo serves as an emblem of the Renaissance, the façade was completed during an era of Gothic revival and is categorized accordingly. The construction took about 140 years!

The façade of the structure is a recognizable blend of green, pink, and white stone laid in an alternating geometrical pattern. They are often referred to collectively as marble, however, the white Carrara is the only true marble of the three stones. The green is serpentine that is quarried from the city of Prato in the northwest of Florence, and the red or pink stone is a fine-grained limestone procured near Florence. Three ornate doorways adorn the building and above the central doorway is a large rose window, with smaller ones at either side. The structure is covered in high-relief panels and statuary.

After the elaborate exterior, the interior of the Duomo is an unexpectedly vast space that is almost minimally disrupted by statuary, frescos, and paintings. The abundant intricacy of the façade sharply contrasts with the austere sobriety of the interior. The most significant artworks within the Duomo are the frescos of the Last Judgement by Giorgio Vasari and his student Federico Zuccari around 1579.

Although burials within the Duomo were discontinued in the 1400s, excavations have revealed the funerary remains of some illustrious Florentines. The crypt of Brunelleschi was unexpectedly revealed in 1972. It is poetic that Brunelleschi was buried facing what would be his most notable work.

The original plans of the Duomo had always contemplated a large dome, but for about a century the cathedral bore an octagonal hole in the ceiling as the architects were at a loss on how to create a dome of this size. Although domes were prevalent features of Italian construction since ancient times, the recipe for concrete had been lost during the Dark Ages, and building a 350 ft (ca. 107 m) tall scaffold for a masonry dome was a daunting task at the time.

The eccentric goldsmith, Filippo Brunelleschi proposed an innovative solution to build a dome without scaffolding and was entrusted with the project. He built two domes, an internal dome that is about 6.5 ft (ca. 1.9 m) thick and comprises arches that are built using a series of bricks, arranged in an interlocking herringbone pattern. This dome is at a deeper angle and supports the external dome that is made of eight white marble ribs and distinctive terracotta tiles. This was Brunelleschi’s first foray as an architect and remains the largest masonry dome ever built!

On the pinnacle of the dome is a white marble tower that is surmounted by a gold-copper sphere and crucifix from the workshop of Andrea del Verrocchio. During a violent storm in the year 1601, lightning struck the sphere and it came tumbling down into the piazza below. However, it remained intact and was restored to its post of glory in the following years.

Although the 265 ft (ca. 80 m) tall bell tower or the Campanile was a part of the original design of the Duomo, construction of the campanile was only initiated in 1334 when Giotto di Bondone was put in charge of the Duomo’s construction. Giotto concentrated almost exclusively on the Campanile and built its foundations and the first level. Upon his demise, the work was passed on to his assistant Andrea Pisano, who faithfully followed Giotto’s design. Pisano perished when the black death swept through Europe in 1348 and construction halted for two years during the devastating pandemic. Francesco Talenti ultimately took over the project and built the uppermost levels of the Campanile making some revisions to the original design to ensure stability and rectify the miscalculations of his predecessors. The campanile was completed in 1359.

The Campanile reiterates the tricolor stone inlay pattern of the Duomo and is similarly adorned in an intricate design, relief panels, and statuary honoring the important city guilds and also depicting biblical and historical scenes.

The Battistero di San Giovanni (Baptistery of Saint John) is believed to have been built over the ruins of a 4th-century temple dedicated to the Roman God, Mars. It was designated a minor basilica and was eventually consecrated as Florence’s Baptistery in 1128, dedicated to San Giovanni or Saint John, the patron saint of Florence. All Florentine Catholics were baptized here up to the end of the 19th century, including poet Dante Alighieri who made a reference to it in his Divine Comedy. It is believed to be the oldest religious site in Florence.

The Baptistery has an octagonal sandstone structure, clad in geometrical patterns of white Carrara and green serpentine. This is the only one of the three structures without the red limestone inlay. The octagonal form is an early Christian tradition that is symbolic of the eighth day when Christ was resurrected, a reference to the rite of baptism. There is a gallery in the upper register, which supports the dome that was surmounted with an octagonal lantern around 1150.

The original structure was covered in the signs of the Zodiac and other pre-Christian motifs, however, it was renovated to accommodate Christian subjects. There are bas-reliefs and statuary depicting religious and historical themes, geometrical patterns, gilded capitals, and marble pilasters. The mosaic work in the interior of the dome is most notable and includes scenes from the Old and New Testaments including the life of Joseph, John the Baptist, as well as the Last Judgement. The mosaic work commenced around 1270 and was a challenging but ultimately rewarding undertaking.

The Baptistery features three historically significant gilded bronze doors on the North, South, and East sides. Each of the three doors was originally located on the Eastern side, leading to the entrance of the Duomo. The oldest door, now on the Southern side, was created by Andrea Pisano. He completed the door in the year 1330, featuring 28 panels with scenes of the life of Saint John.

In the early 15th century, Arte del Calimala, or the Wool Merchants’ Guild announced a public competition to commission the Northern doors of the
Baptistery. Amongst the many contenders, the two forerunners were Lorenzo Ghiberti and Filippo Brunelleschi. Ghiberti’s submission was ultimately favored and adopted. It consisted of 20 quatrefoils panels with scenes from the Life of Christ, the Four Evangelists, and the Doctors of the Church.

Ghiberti also created what is now the Eastern door. This exquisite door comprises ten rectangular bas-relief panels, depicting various important scenes of the Old Testament as well as bronze busts of illustrious Florentines, including Ghiberti himself. Unlike his previous door for the Baptistery (that now faces North), Ghiberti was given artistic freedom with this door. The skilled combination of high and low relief demonstrates Ghiberti’s ability to convey linear perspective and is among the most famous artworks in the world. Michelangelo famously described these doors as the Gates of Paradise.

Birthplace of the Renaissance

The Duomo, the Campanile, and the Baptistery are the jewels of Florence that sparked the Renaissance. Florentines of the 1400s were immensely and justifiably proud of their extraordinary architecture. The awe-inspiring sight of these structures along with the rich history that lives in every crevice has enthralled and delighted generations of visitors to this historical city.