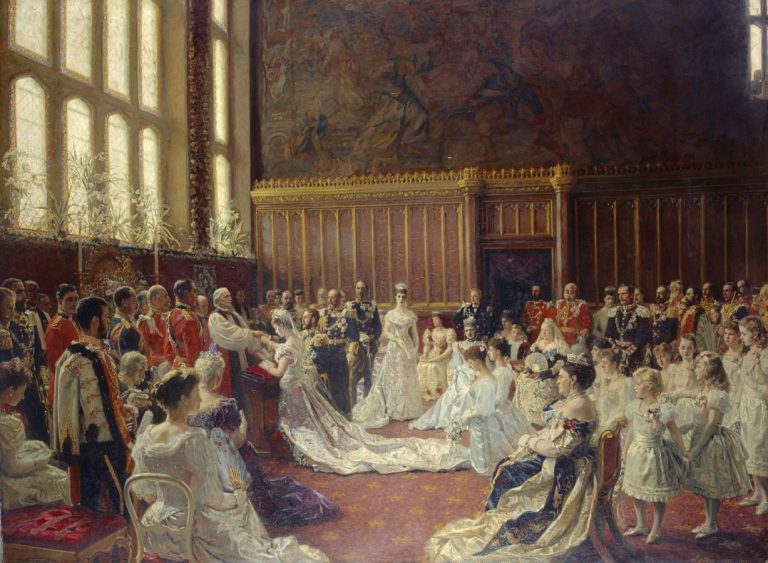 Alexandrina Victoria ascended to the throne at the young age of 18 and reigned as Queen Victoria of the United Kingdom, of Great Britain and Ireland, and Empress of India for about 63 years. She was the second longest-reigning British monarch, surpassed only by Queen Elizabeth II in 2016. Queen Victoria has been credited with starting the tradition of white wedding dresses. Before her own wedding to Prince Albert of Saxe-Coburg and Gotha, wedding dresses came in a variety of colors.

Both Victoria and Albert were avid art collectors as well as highly educated and knowledgeable patrons of the arts. The following paintings from the Royal Collection Trust include some important commissions of the royal couple and members of their large brood.

This painting depicts the royal wedding of Victoria and Albert on February 10, 1840. The ceremony took place at the Chapel Royal, St James’s Palace, and was officiated by the Archbishop of Canterbury. The Queen entrusted this important commission to the esteemed Sir George Hayter as she had been pleased with his rendering of her coronation in 1838.

Hayter made several tours to the venue to make preparatory sketches that have been preserved. Interestingly, the artist took creative license by introducing a Gothic canopy and paneling in the painting. It is assumed that this was permitted by the Queen as Hayter had also made dramatic alterations in his renderings of her coronation. The artist himself makes an appearance on the lower right of the painting with his sketchbook and pencil.

This painting depicts the wedding of Queen Victoria and Prince Albert’s eldest son Edward to Princess Alexandra of Denmark. This wedding came as a relief to the Queen as she had been concerned by Edward’s irresponsible ways and hoped that the marriage would bring stability. The wedding took place at St George’s Chapel in Windsor rather than in the capital as the court was in mourning due to the recent demise of Prince Albert.

Firth used both live sketches and photographs to complete the painting as well as sittings from some of the attendees. He found the process of working from the photographs to be highly unsatisfactory! The artist also faced some obstacles in gaining access to the clothing of the guests. Although the Queen had some initial concerns about the painting she was pleased with the final outcome. The painting was exhibited at the Royal Academy in 1865.

This painting depicts the marriage of Princess Helena to Prince Christian of Schleswig-Holstein. This royal wedding took place on July 5, 1866, in the Private Chapel of Windsor Castle. Princess Helena, known also as Lenchen, had a vivacious personality and an avid interest in science, music, and the arts. Her betrothal to Prince Christian was controversial due to his family’s claim over Schleswig and Holstein. This was a contentious issue between Denmark, the homeland of Helena’s sister-in-law, Alexandra, Princess of Wales, and Germany where Helena’s sister Victoria was Crown Princess.

Crown Princess Victoria had recommended the artist, Christian Karl Magnussen, for this commission. Unfortunately, the artist did not enjoy the approval of the Queen who remained unimpressed by the final result.

This painting depicts the wedding of Alfred, the Duke of Edinburgh, and Grand Duchess Maria, the only daughter of Alexander II and Maria Alexandrovna. The two young royals met in Germany and fell in love.

Queen Victoria chose artist Nicholas Chevalier to travel to Saint Petersburg and render the Orthodox ceremony at the Alexander Hall on January 23, 1987. Chevalier presented the rich architectural details in all their intricate glory, illuminated by the soft light pouring in through the large windows.

Although the Queen did not attend the ceremony herself, she was represented at the ceremony by Prince Alfred. He is prominently displayed here in his red military jacket. This union, unfortunately, turned volatile as Alfred was a womanizer, meanwhile the Romanov bride also did not enjoy her new home or her in-laws.

In 1879, Prince Arthur, Duke of Connaught married Princess Louise of Prussia in St George’s Chapel, Windsor. Here, the bride is being escorted by her father, Prince Frederick Charles of Prussia, and Crown Prince Frederick William. Arthur was the Queen’s seventh child.

The Queen granted this commission to illustrious British artist Sydney Prior Hall. Although the painting did not win the approval of the Queen, she was also disappointed by the delays in its completion. It was exhibited at the Royal Academy in 1882.

This painting depicts the wedding of Leopold, Duke of Albany to Princess Helen of Waldeck and Pyrmont. Leopold was the eighth child of Queen Victoria and Prince Albert. The couple married on April 27, 1882, at St George’s Chapel in Windsor. Here, Queen Victoria is depicted beside the newly wedded couple at the altar. According to the Queen’s journal entries, this was the first time since her own wedding in 1840 that she wore her wedding lace.

Queen Victoria commissioned this work to a rising young artist, Sir James Dromgole Linton. This decision was not entirely without remorse as Linton’s slow progress on this painting irked the Queen. Unfortunately, just as the artist completed the work in 1884, Leopold succumbed to a brain hemorrhage. The painting was exhibited at the Royal Academy in 1885 as a memorial to the Duke of Albany.

This painting depicts the wedding of Queen Victoria’s granddaughter, Princess Maud, to Prince Charles of Denmark on July 22, 1896. This couple was married in the Private Chapel at Buckingham Palace. It depicts the regent clasping the bride’s hand after the wedding, a tender moment between the powerful grandmother and her granddaughter.

The painting was the work of Laurits Regner Tuxen who relied on both wedding photographs as well as portraits to complete this painting, Queen Victoria presented this painting to Maud’s parents.