Painting of the Week: Édouard Manet’s Portrait of Eva Gonzalès 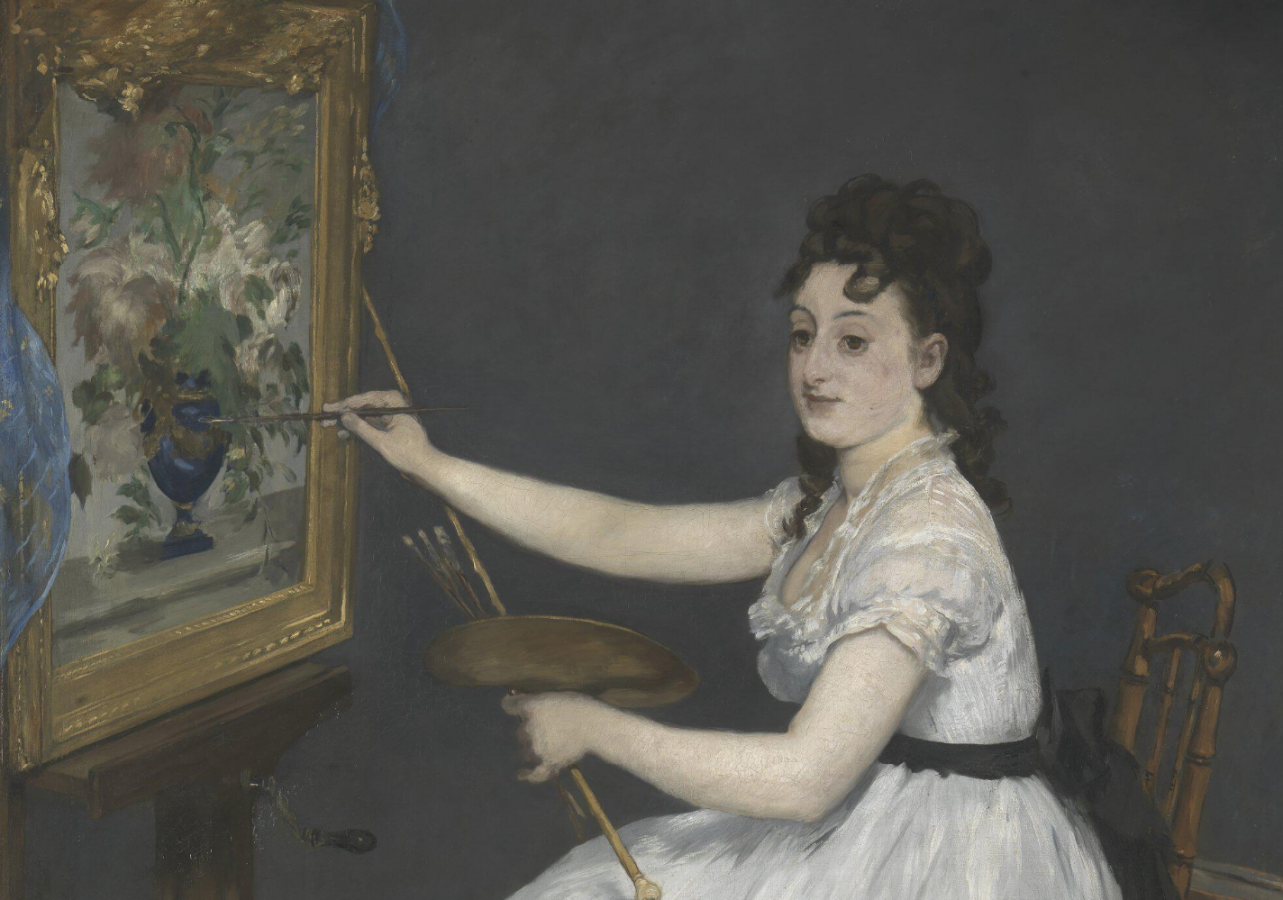 You’ve probably heard of the Impressionists: Claude Monet, Edgar Degas, Paul Cézanne, and Camille Pissarro. These guys are not only known for their bad-boy, dare-to-be-different attitudes, but also for being a sect of painters which included and honored women, such as Eva Gonzalès, Berthe Morisot, and Mary Cassatt. Our painting of the week, Portrait of Eva Gonzalès, by another famed impressionist, Édouard Manet, illustrates their inclusion and, better yet, comes with a side of romantic intrigue!

Édouard Manet was born in Paris in 1832 to a wealthy family. From a young age, he showed artistic promise and in 1850, he became a student of the academic artist, Thomas Couture. By 1856, he had started his professional career and begun to develop his own way of painting. While his style was similar to the impressionists in its loose, free brushwork and focus on everyday life, it was still calculated. Manet constructed his pieces using models, preparatory drawings, and in-studio painting, whereas many of impressionists preferred to paint spontaneously outdoors. Nonetheless, Manet has posthumously gone down in the books as an influential, yet controversial artist and the father of modern art.

Manet was often criticized for his realistic style, which we see in his Portrait of Eva Gonzalès; the brushwork is tight and polished and we can see his attention to detail. Speaking of which, considering this is a portrait of a female artist, it seems odd he has chosen a full-length portrait as opposed to a bust. It’s almost as if Manet is combining the idea of formal portraiture with an artist’s portrait. Even weirder is the fact that Eva is painted in a beautiful white gown, not a paint-splattered smock. Take a look at the canvas, too. She’s working on a still life of a flower arrangement, typical subject matter for proper ladies as their ability to freely interact with the world was a bit constricted. Then, there’s the frame around the painting-in-progress. Usually, a piece is framed once it is completed, not while it is in progress, making the inclusion of the frame a bit strange.

These details suggest Manet was purposely highlighting her femininity and pointing out the fact that the Victorian era‘s rigid definition of gender roles constricted a female artist’s creativity. Many female artists at this time, including Gonzalès, Cassatt, and Morisot, struggled to have their work taken seriously by the academics. It was often described as being the modern-equivalent of “cute” where their male counterparts created work that was “outstanding.”

Don’t be confused. This portrait is not meant to mock Eva Gonzalès. She was the only pupil Manet ever took on and she was a good one. Her paintings were shown alongside his and were also featured at the prestigious Paris Salon. However, when Berthe Morisot caught wind of his portrait of Gonzalès, she became quite jealous and perhaps depressed. You see, Morisot had been a sort of muse for Manet and was featured in 14 of his paintings. Over time, she developed quite the crush on Manet; she wrote to friends of his good looks and there are rumors of an affair between them, but nothing concrete. In the end, Morisot couldn’t get the man she hoped for and married Manet’s brother Eugène instead.

If you find any joy and inspiration in our stories, PLEASE SUPPORT
DailyArt Magazine with modest donation. We love art history and we want to keep going with writing about it.
$5 $10 $25 $50 $100 MONTHLY
Related Topics:Edouard Manet, Eva Gonzales, featured, france, portrait

Abreeza is a Mississippi native with a strong passion for all things art. In 2018, she graduated from the University of Southern Mississippi, earning a B.A. in Art with minors in Art History and French. As a teacher, she is learning more about her craft and passing on the importance of art history, creativity, and observation to her students.

In her free time, she continues to independently produce linocuts, monotypes, and drawings while spending an equal amount of time cuddling with her cat.