Marc Chagall, Paris Through The Window 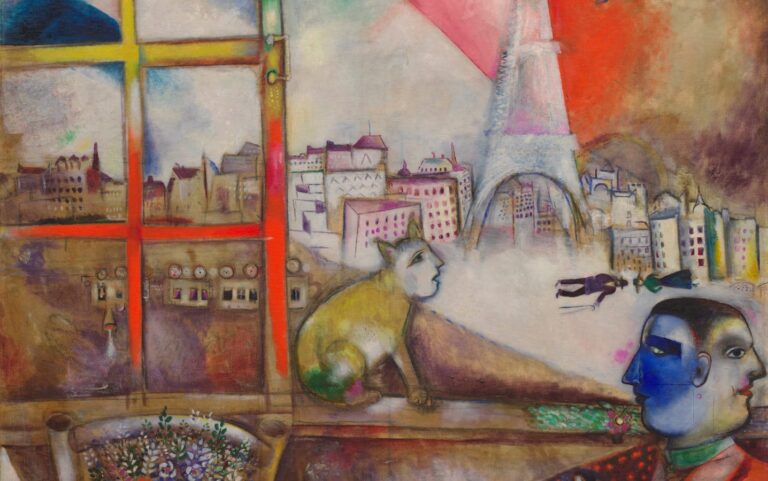 Chagall’s Artistic Battle with Malevich and the Forces of Suprematism

Audrey Hepburn in the movie Sabrina said: “Paris is always a good idea”. A similar idea must have come to the mind of Marc Chagall who moved to Paris from Russia in 1910. Chagall was overwhelmed by the recent inventions of the various avant-garde movements.

In Paris Through the Window, Chagall’s debt to the Orphic Cubism of his colleague Robert Delaunay is clear in the semitransparent overlapping planes of vivid color in the sky above the city. Delaunay also loved to painted The Eiffel Tower. Chagall’s parachutist might also refer to contemporary experience, since the first successful jump off the top of the Eiffel Tower occurred in 1911 and the fact that a Russian inventor was the creator the first workable knapsack parachute.

It seems likely the artist also included this man, falling from the sky into Paris, as a reference to the leap of faith he has just taken with his new Western lifestyle and the new contemporary art forms he is now embracing. Other motifs suggest the artist’s native Vitebsk. This painting is an enlarged version of a window view in a self-portrait painted one year earlier, in which the artist contrasted his birthplace with Paris. The Janus (the Roman god with two faces) figure in Paris Through the Window has been read as the artist looking at once westward to his new home in France and eastward to Russia.

The famous artist’s nostalgia for his homeland Russia is also represented by the upside down railroad train to the left of the cat in the center of the painting. This represented his inability to return home. Please notice the human face of the yellow cat. The Jewish people often thought of cats as sinners who have passed on, but have returned to this life via the feline form to haunt family members.

The end result of the painting is a brilliantly balanced and visually appealing snapshot of Paris, juxtaposing the imaginary and the real, all seen through eyes that are both eccentric and loving.