A Perfect World of Perfect Women in James Tissot’s Paintings 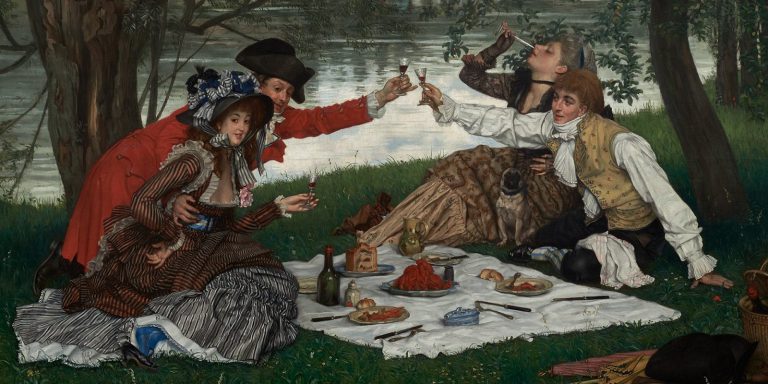 This title might be a little controversial. In fact, critics find the term demimondaine to be more accurate when describing James Tissot’s series of paintings of women called La Femme à Paris. This is because the “perfect” women in Tissot’s paintings were not so perfect for their contemporaries…

A woman who chose to live her live to the fullest was lost in the eyes of her contemporaries. Her social class rejected her, hence the term déclassée. Consequently, such a woman soon became isolated from other women, those who lived a more “traditional” lifestyle as wives.

Demimonde women became one of the characteristics of the historical Belle Epoque, which lasted from 1871 until World War I. Two famous demimondaine that you can read about in our magazine are Sarah Bernhardt and Virginia Oldoini.

Tissot exhibited a series of 15 large-scale paintings called La Femme à Paris (The Parisian Woman), which he had created between 1883 and 1885. This exhibition took place on his return to Paris after an 11-year stay in London. Among the 15 works shown were The Bridesmaid, The Political Lady, and The Circus Lover (shown below). The circus portrayed is Molier Circus in Paris. Here, members of the aristocracy could demonstrate their amateur skills. The man on the trapeze in the centre is the French noble Duc de la Rochefoucauld. According to his contemporaries, he had “the biceps of Hercules.”

Each of the paintings in the series was meant to have a short story or an essay associated with it, written by a Parisian author. However, only a few of the authors seem to have responded to the invitations sent out by Tissot’s friend, the novelist Alphonse Daudet. Sadly, the critics did not praise the “perfect women” in James Tissot’s paintings. They found them awkward, looking like “gracious puppets”; others complained that they always depicted “the same Englishwoman.” This referred to their resemblance to Kathleen Newton, Tissot’s lover who had died of tuberculosis. Thus the project with which Tissot intended to re-establish himself in Paris turned out to be a flop.