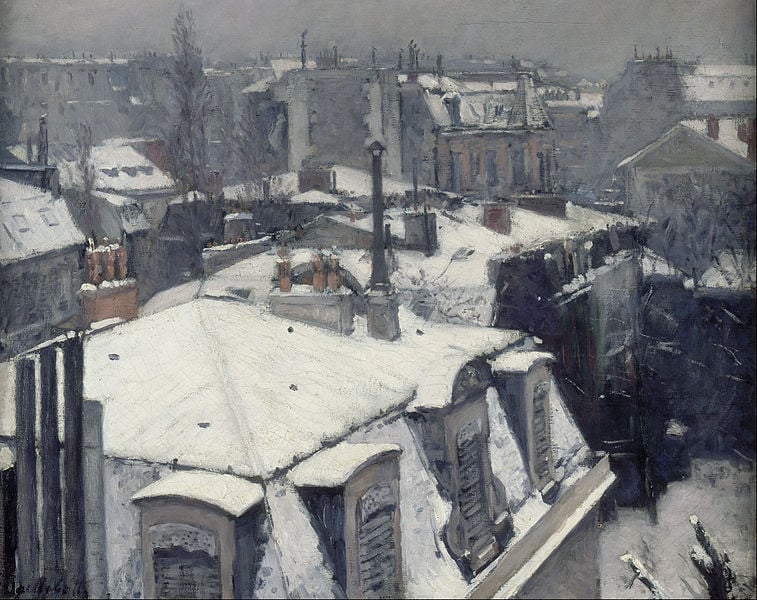 You open your eyes to the early morning light filtering through your windows. You instantly feel the cold air of the bedroom as you see your warm breath rise in clouds above your bed. It is a cold winter’s morning as you and Paris begin to awake. You rise and move towards the window to judge the weather. You throw back the shutters and gaze over the icy rooftops of the surrounding neighborhood. It rained last night, and the cream-colored limestone of Paris is covered in a white blanket of snow and ice. The sky is overcast with dark rain clouds contrasting with the bright snow banks. Paris has transformed from a city of light to a city of snow. Gustave Caillebotte explores the atmospheric effects of an urban landscape transformed by inclement weather in his Rooftops in the Snow. This is not the sunny Paris of our dreams. Let us explore a Caillebotte masterpiece. Let us explore a Parisian landscape.

Gustave Caillebotte (1848-1894) was an Impressionist painter, and friend-patron of Claude Monet, Auguste Renoir, and Camille Pissarro. He lived the majority of his life in and around Paris where he found the majority of his paintings’ subjects. Unlike many of his fellow Impressionist painter-friends, Caillebotte painted unromantically with an objective realism. He did not romanticize his subjects and therefore included their drab details and mundane colors. Not every moment could be pretty. Not every moment should be pretty as life is not a continuous flow of pretty moments. Life is predominantly filled with ordinary moments, and that is exactly what Gustave Caillebotte captures in Rooftops in the Snow and many of his other works.

Rooftops in the Snow depicts a freezing winter’s morning in the heart of Paris. The viewer is from a high vantage point assuredly from an upper window in a multi-storey building. The viewer overlooks the buildings clustered nearby forming the surrounding neighborhood. A thick layer of white paint covers the horizontal surfaces of the buildings implying a thick layer of snow. It clings to the slanted roofs, window ledges, and chimney pipes. The famous Lutetian limestone or Paris stone is barely visible. The snow masks some of the city’s Parisian identity making it less iconic and more ordinary. Rooftops in the Snow could be depicting any French city, not just Paris.

Rooftops in the Snow possesses probably one of the gloomiest skies in the school of Impressionism. A thin hazy grey paint implies an overcast sky heavy with clouds and snowfall. The sky’s grey pigments are used sympathetically throughout the buildings’ grey façades. The foreground building has windows that match similar shades seen in background buildings’ walls, and seen in the sky itself. There is a repetition of similar greys throughout Rooftops in the Snow that gives the painting a sense of harmony and balance. No part of Rooftops in the Snow feels unbalanced or overpowering. Everything is unified by color and those colors are grey and white.

Rooftops in the Snow has an injection of black amongst its predominantly white and grey color scheme. This black injection contrasts sharply with the white snow. The vertical black chimneys and pipes offer a foil to the horizontal white roofs and ledges. The vertical black elements prevent Rooftops in the Snow from becoming a bleached painting of horizontal monotony. The black details ensure a full range of color values from sombre black, through midpoint grey, to brilliant white. Like the best examples of black-and-white photography, both extremes of lightness and darkness must be present. It adds depth, interest, and vibrancy.

Rooftops in the Snow is a wonderful depiction of a modern Paris dealing with an ancient experience. The Paris we know today was created during the Second Empire by Baron Haussmann from 1853 to 1870. Baron Haussmann was the Prefect of the Seine for Emperor Napoleon III and dramatically destroyed and rebuilt huge sections of Paris. Overcrowded and unhealthy neighborhoods were demolished to allow the urban centers of Paris to be built more spacious and more hygienic. Rooftops in the Snow depicts this Haussmann Paris that we still know today. Painted in 1878, Rooftops in the Snow shows the mansard roofs, and gabled windows so typical of Haussmann’s design. Caillebotte’s painting captures a timeless experience – snow – with modern architecture. New buildings mix with old weather. This is a Caillebotte masterpiece. This is a Parisian landscape.