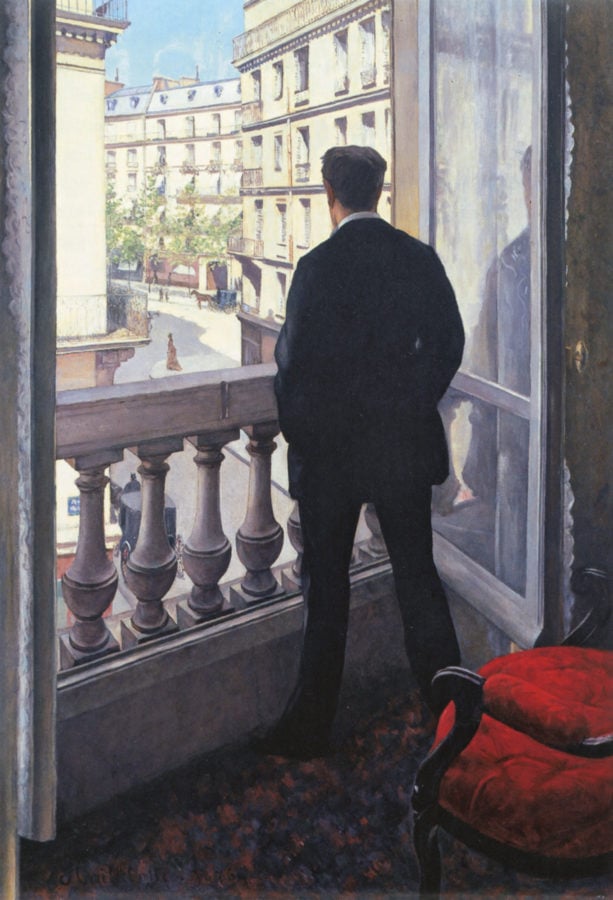 Gustave Caillebotte was a master of urban intimacy. He was a member and patron of the artists known as Impressionists, in fact he painted in a much more realistic manner than many other artists in the group. Caillebotte wanted to paint reality as it existed and as he saw it, hoping to reduce the inherent theatricality of painting. He was one of the first painters interested in photography – he often used cropping and “zooming-in” techniques but his realism didn’t end up with just that. Caillebotte was trying to catch the psychological complexity, boredom, loneliness, and sense of distance. Here we present a gallery of his paintings… with people at windows.

Caillebotte’s focus on urban themes intensified after 1879, when, after his mother’s death, the artist left the family house at the corner of the rue de Miromesnil and the rue de Lisbonne, and moved to the sixth floor apartment on the boulevard Haussmann. The discovery of the grand boulevards, with the Opéra appearing in the distance, had a great impact on his art.

Young Man at his Window

This painting depicts the artist’s brother, René Caillebotte, wearing informal clothes and standing at a balcony from the family home in the Rue de Miromesnil in Paris, looking outwards into Boulevard de Malesherbes. Is René watching the woman on the street? Does he know her?

Caillebotte presented this painting at the Impressionism exhibition of 1876. Émile Zola was impressed with technical achievement of the works, but was not enthusiastic about the style: “Photography of reality which is not stamped with the original seal of the painter’s talent—that’s a pitiful thing.” He called the painting “anti-artistic… because of the exactitude of the copying.”

Interior, Woman at the Window

This painting shows a man and woman within a compressed space. The coldness of their emotional distance can be easily sensed despite their physical proximity. The man, seated in an armchair, is absorbed in his newspaper while the woman stands before the window and gazes at the boulevard below, equally consumed by her own thoughts. Across the street there is another figure, who’s glimpsing through the parted curtains and perhaps watching the woman. It is a picture that suggests loneliness, isolation, and desire.

This painting was sold on an auction in 2000 for $14,306,00. But we don’t want to talk money here. The masterpiece captures the view from the artist’s Parisian apartment at the corner of the rue Gluck and the boulevard Haussmann, in the 9th arrondissement. Caillebotte here was no longer interested in the depiction of the street, nor in the confrontation between interior and exterior, focusing instead on the perspective of the boulevard and the light effects.

For many years and in part because he never had to sell his work to support himself, Caillebotte’s reputation as a painter was overshadowed by his recognition as a supporter of the arts.  His art was largely forgotten until the 1950s when his descendents began to sell out the family collection. In 1964, The Art Institute of Chicago acquired Paris Street; Rainy Day, spurring American interest in the artist. By the 1970s, his works luckily were being exhibited again and critically reassessed.