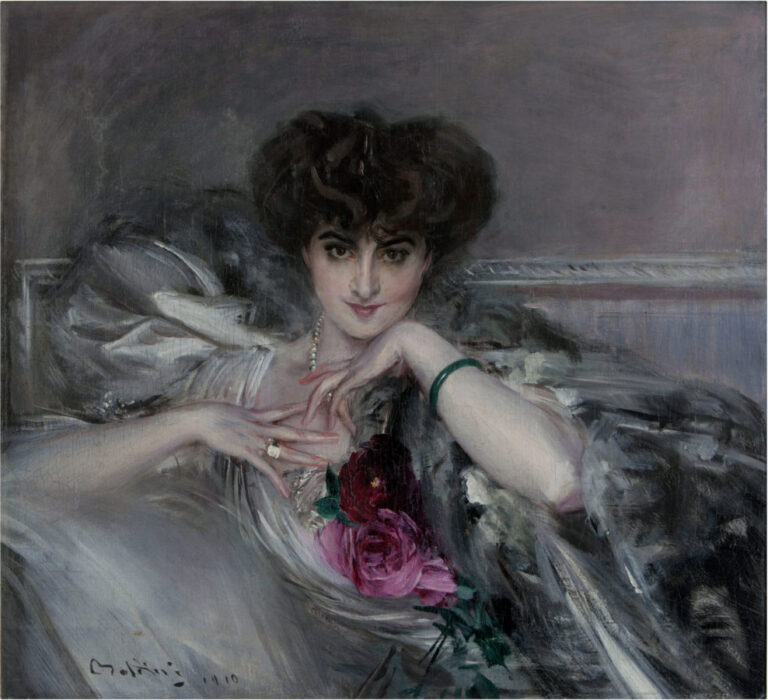 Pretty Women: Female Beauty and the Three Graces in Paintings

Giovanni Boldini (1842-1931) was a popular society portrait painter in turn-of-the-century France and England. His elegant portraits are still much appreciated today. He is best known for depicting gorgeous and fashionable women – mostly socialites, noble women, and actresses – in spectacular dresses.  His female portraits are full of life; his men are also striking but not usually as vibrant.

Boldini must have really loved fashion, since most of his portraits feature evening gowns as least as prominently as the women wearing them. These dresses typically steal the show, but when you look at them closely, they seem to dissolve into near abstraction. Boldini was a master at using loose, flowing, swirling brushstrokes to indicate elegant silks and chiffons that take on a life of their own. The most recognizable feature of his style, this earned him the nickname “the Master of Swish”. He usually painted other sections of his works, such as sitters’ faces and elegant furniture, with more solidity, and this contrast only makes the fabrics that much more striking. His works are also recognizable for the subjects’ exaggerated pointed chins, bow-like red lips, elegant noses, and lithe hands and fingers held at jaunty angles.

Early in his career back in Italy, Boldini belonged to a group of artists, called the Macchiaioli, who experimented with nontraditional subjects and styles. They had much in common with the Impressionists, who also challenged artistic tradition. Boldini later became friends with several Impressionists; however, his society portraiture did not share most Impressionist values, despite a resemblance in brushwork. Boldini’s style and clientele had much more in common with his contemporary and friend John Singer Sargent, whose portrait he painted several times.

Let’s take a look some of Boldini’s most fashionable subjects.

“Comprehensive and spectacular retrospective of the work of Giovanni Boldini on view in Rome”. Art Daily. (Date and author not given.) Accessed October 1, 2017.

“’The Master of Swish’ – Boldini’s Elegant Portraits of High Society Women”. 5 Minute History. (Date and author not given.) Accessed October 1, 2017.

Alexandra believes that enjoying the art of the past is the closest she can get to time travel, only much safer. When she's not being an art historian, she can usually be found ice skating and dancing. Visit her at ascholarlyskater.com and the-art-museum-insider.teachable.com.