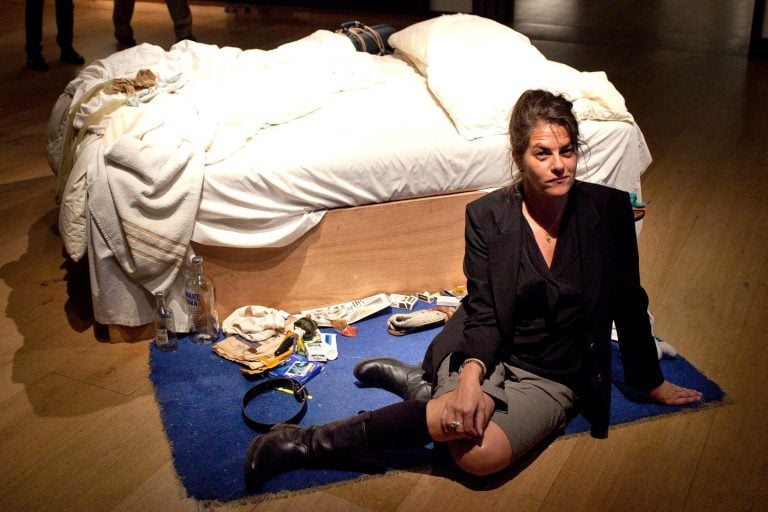 Tracey Emin with My Bed. Photo by Ben Gurr/The Times.

My Bed is an iconic and seminal artwork by British artist Tracey Emin. It was created over 20 years ago. Despite its age, it is still one of contemporary art’s most striking depictions of vulnerability.

Originally, My Bed was made in Tracey Emin’s Waterloo council flat in 1998. First, it traveled to Tokyo and then to New York. Next, My Bed became famous – during the 1999 Turner Prize exhibition. Now, it is on a long-term loan to the Tate, following its purchase by a private collector in 2014.

My Bed: A seminal artwork

Beds often feature in artworks, with, most often, a nude posed on top. Robert Rauschenberg has created a work titled Bed, which was made from old bed sheets, pillows, and a quilt. However, it was all put inside a frame and hung on the wall. Before My Bed, no one had ever displayed a bed as an art object itself. It is a portrait of a young woman, devoid of, and made by, the woman herself. My bed is not a representation of an object, such as with paintings or sculptures. Rather, it is the art object in and of itself.

The place of My Bed within art history

Tracey Emin was part of a group of artists in the late 1980s that came to be known as the Young British Artists, which included artists such as Damien Hirst. The YBAs would exhibit together and were known for their innovation, shock tactics, and entrepreneurial attitude. It is in this context that My Bed was created.

My bed can also be seen to be an inheritor of the “anti-art” tradition. This term was coined by Marcel Duchamp in the 1910s when he first began making readymades, such as his Fountain (1917).

My Bed is also related to the idea of “found objects” in art. From 1912, Picasso would incorporate things like newspapers into his Cubist collages. Various artists used found objects, like Henry Moore, who collected bones and flints as natural sculptures, and Salvador Dali, who modified found objects for his artworks.

Originally, My Bed was exhibited alongside three miniature watercolors by Emin. In 2015, at Tate Britain, Emin chose to place it next to paintings by Francis Bacon as well as some of her current drawings.

“This is a beautiful place that’s kept me alive”

When My Bed visited Emin’s hometown, Margate (Oct 2017–Jan 2018), it was accompanied by JMW Turner paintings in an exhibition Tracey Emin, My Bed/JMW Turner, Turner Contemporary.

I had a kind of mini nervous breakdown in my very small flat and didn’t get out of bed for four days … I crawled across the floor, pulled myself up on the sink to get some water, and made my way back to my bedroom, and as I did I looked at my bedroom and thought, ‘Oh, my God. What if I’d died and they found me here?’ And then I thought, ‘What if here wasn’t here? … at that moment I saw it, and it looked fucking brilliant. And I thought, this wouldn’t be the worst place for me to die; this is a beautiful place that’s kept me alive … when I put it into the white space, for some people it became quite shocking. But I just thought it looked like a damsel in distress, like a woman fainting or something, needing to be helped.

Tracey Emin, quoted in an Interview with Julian Schnabel, June 2006.

My Bed is personal but nonetheless art

Now, My bed is over 20 years old. Emin puts it back together precisely, whenever it is shown. She describes this process as quite painful, as it requires her to revisit a past version of herself.

Like almost all artists Emin’s personal life informs her work. However, the extent to which her art is confessional is something that makes her stand out.

Nonetheless, integrity is vital for her artworks. Emin turned down the £1 million insurance money and declined to remake another of her seminal pieces Everybody I have ever slept with when it was destroyed in a fire.

“The response people had to it is part of its identity”

My Bed did not win the 1999 Turner Prize but the media sensation it stirred launched Emin’s glittering career. Shamefully, much of the early response to her art was gossip rather than a critical debate of her work.

Many modern artists take the view that art should address the more unpleasant realities of life and should not necessarily be conventionally beautiful … Tracey Emin, while controversial, is a well respected contemporary artist of the younger generation and already has an international reputation – My Bed was shown in exhibitions in New York and Tokyo earlier this year.

It has taken a long time for art critics to accept the influence of Emin. When My Bed went up for auction in 2014 it was undervalued by over £1 million.

Shocking art has always had an important place in art history, for example, the Impressionists weren’t appreciated from the very beginning. Often, seminal works are shocking by definition.

Emin’s magnificent oeuvre includes sculpture, photography, needlework, drawing, painting, video, and installation. She regularly donates to charity and would describe herself as a feminist (although she would not say she makes feminist art). Queen Elizabeth II awarded Emin a CBE in 2013 for her contributions to art.