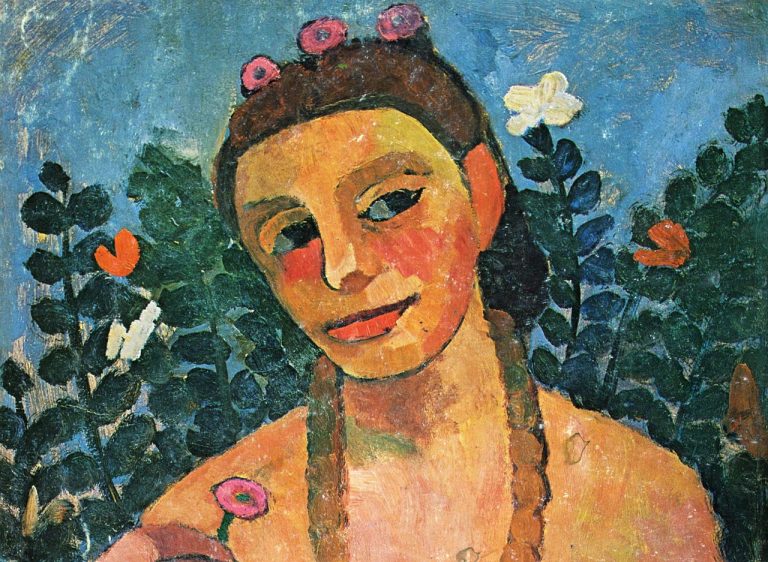 Some time ago, I came across a fascinating German Expressionist who was not part of the famous Die Brücke group. All the more, this painter was a woman in a world that was dominated by men, which was quite unusual. I decided to explore her story. Meet Paula Modersohn-Becker, the Expressionist!

Paula Modersohn-Becker should unmistakably be considered one of the pioneers of European modern art. The simplicity of form is juxtaposed with the distinctive surface texture achieved by means of relief-like modeling and by scratching into the wet paint.

Modersohn-Becker had already established her own unique style at the beginning of her career when she moved to Worpswede in 1898, a village north of Bremen, to study under the painter Fritz Mackensen, the founder of the Worpswede artists’ colony. It was there she met Heinrich Vogeler, Clara Westhoff, Rainer Maria Rilke, and Otto Modersohn, whom she married in 1901.

Modersohn-Becker is largely famous for her insightful portraits for which she selected local children, old women, or farmers’ wives. In 1900, she traveled to Paris and, in 1905, she discovered the works of Paul Cézanne and Paul Gauguin. Since then, she started using bright and strong colors and distinctive contours. She stayed in Paris until 1907 when she returned to Worpswede. Sadly, she died the same year of an embolism that followed the birth of her daughter.

Paula Modersohn-Becker, the Expressionist, has her own museum which you can find in Bremen, Germany. It was the first museum in the world to be dedicated to the work of a female painter! The building was designed by the architect Bernhard Hoetger, and it is considered one of the most important examples of Expressionist architecture in Germany. The museum opened in 1927.