5 Portraits by Paul Cézanne You Have Probably Never Seen Before 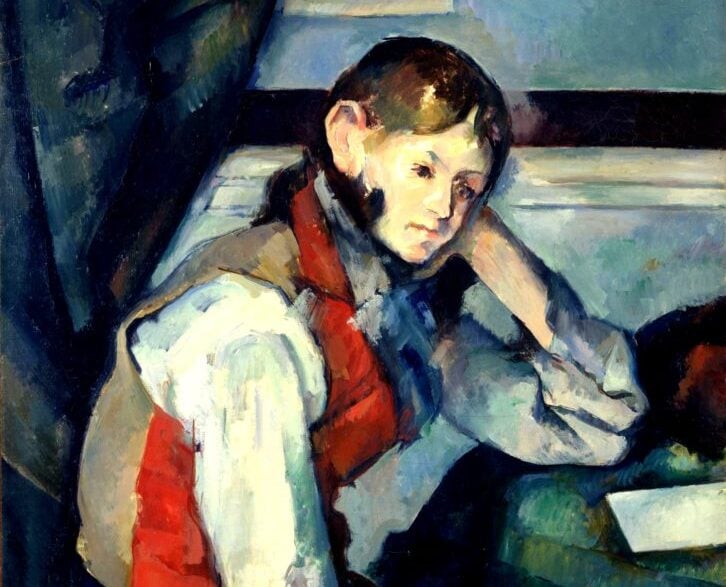 5 Paintings by Piet Mondrian You Wouldn’t Believe Were His

Paul Cézanne is mostly associated with still-lifes. Characteristic square apples and oranges laid on the tables with kicked perspective are something that always come to mind when we think of Cézanne. But Cézanne often painted portraits and he treated the human being as an object, refusing to soften his manner or to be diverted by psychological details. For him, nature, objects, and people compose a single material world, reproducible through paint. This unity is underlined by one of his own still-lifes, which usually serves as the background of the portrait. Here, you will find 5 Cézanne portraits you probably haven’t seen before.

Cézanne painted four oil portraits of this Italian boy in the red vest, all in different poses, which allowed him to study the relationship between the figure and space. In 1895, art critic Gustave Geffroy said about this painting it could stand comparison with the finest figure paintings of the Old Masters. We totally agree! In February 2008, the painting was stolen from the Foundation E.G. Bührle in Zurich. It was the museum’s most valuable painting and was valued at $91 million. Luckily, it was recovered in Serbia in April 2012.

Cézanne’s wife, Hortense Fiquet, was his most frequent model. Cézanne painted nearly 30 portraits of her! This early portrait has some kind of monumentality which matches Cézanne’s idea about modern art. In one of his most frequently quoted statements, the artist said, “I want to make of Impressionism an art as solid as that of the museums.” Hortense did not share Cézanne’s passion for painting and literature, and she preferred the bright lights of Paris to the solitude of the Provençal countryside. But she seems to have possessed huge reserves of patience and posed for the artist in endless sittings.

According to the poet and writer Joachim Gasquet, the sitter in this painting was a former nun who had escaped from a convent and had wandered aimlessly until the painter took her on as a servant. Gasquet found this painting in 1896 at Cézanne’s family house near Aix-en-Provence, lying on the floor of the artist’s studio with a pipe dripping on it.

Gustave Geffroy was an art critic who praised Cézanne’s paintings. To show his gratitude, Cézanne offered to paint the critic’s portrait in the spring of 1895. Cézanne delayed painting the face and hands to the last moment, and finished by leaving them incomplete. The figure of Geffroy forms a strong triangle in the centre of the painting. The setting – books, inkwell, rose, Rodin statuette – identifies the activities and tastes of the subject, without any feeling of complicity. Unfortunately, Cézanne’s gratitude gradually gave way to irritation with his subject whom he found too eclectic in his artistic tastes and too disrespectful of religion. This irritation quickly turned into outright hostility, if one is to believe the account of Joachim Gasquet who spoke of “the sort of inexplicable hatred that Cézanne bore Gustave Geffroy”. Well, life.

Cézanne painted three versions of Paulin Paulet, the gardener leaning on his elbow, smoking a small white clay pipe. The artist gives him a calm, solid pose, devoid of any gesture or expression, which lends him a certain gravitas. A small still-life arrangement, consisting of some fruit and two bottles of wine, can be seen behind his elbow. His hat is pushed back on his head and his suit has been painted in grey tones. “Most of all,” said Cézanne, “I love the appearance of those who have aged without ever changing their habits.” Such is Paulin Paulet here.