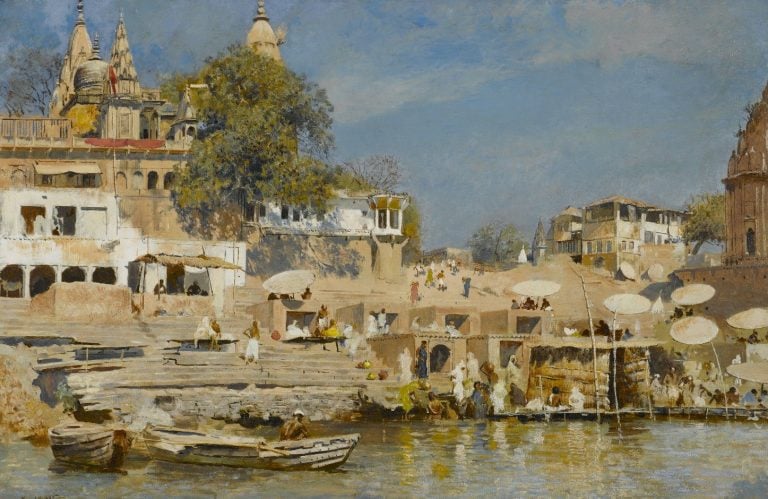 Edwin Lord Weeks was a remarkable American painter and one of the most celebrated Orientalists of his time. He lived a coveted life of travel and adventure that inspired a considerable body of works acclaimed on both sides of the Atlantic. His paintings were romantic renderings of places he visited on his extensive travels that emphasized the diverse vistas and architecture that he encountered along the way. He had an incredible talent for depicting texture on canvas that encapsulated the very essence of his exotic voyages. His pictorial memoirs of India, in particular, became an immensely favored albeit idealized artistic chronicle of India in the 19th century.

Born in Boston, MA, USA, Weeks had a privileged upbringing and wealthy parents who supported his passion and artistic endeavors. Vacations to the Florida Keys as well as to South American countries in his youth sparked his passion for travel, and for chronicling his travels with a paintbrush. He was only 21 when he established a studio in Newton, MA, USA, and became an active member of the influential art circles of Boston.

Weeks embarked on an extended period of travel between America, Europe, and the Near East for several years. He spent significant stretches in unfamiliar and sometimes treacherous terrains across the world, passing through many counties like Spain, Syria, Egypt, Turkey, Morocco, and Persia. He was undeniably mesmerized by the unfamiliar scenes before him and they resulted in some of his most well-received works. The color and warmth of the Eastern world had him spellbound.

During these travels, Weeks would position himself in the middle of busy centers or markets to create sketches and take photographs of his intended subjects. These detailed studies later inspired exquisite works that were then completed in his studio.

His ability to draw ethnic types without condescension or caricature, his skill in putting together grand compositions, his ability to tell convincing tales – all these skills make his paintings compelling. His wonderful eye for architecture, not just for its stylistic niceties, but also for its presence in sunlight, transmits a view of the past that has to be accepted as true.

Around 1870, Weeks and his wife, Frances Rollins Hale, moved to Paris, which became his home for the remainder of his life. This was a turning point in his professional growth as it was in Paris that Weeks made a concerted effort to hone his skills as an artist by training in the elite circles of Parisian Orientalists. Although his interest in Orientalist themes preceded his arrival in Paris, his formal education undoubtedly played a defining role in his development as an Orientalist. Some art historians believe the training was under the academician, Jean-Léon Gérôme, while others report him to be trained by Léon Bonnat.

From 1878 onwards, Weeks became a regular contributor to the Paris Salon and his entries caught the attention of the well-known art dealer, Paul Durand-Ruel, who began representing him. Later in 1896, he received Légion d’honneur, the highest French order of merit.

The Voyages to India

Weeks made three visits to the Indian subcontinent during his lifetime, and his most grand compositions feature idealized renderings of 19th-century India. He focused on the vibrant culture, swarming life and social interactions, and ethnicity of the people in elaborate traditional garb. So powerful were his depictions that the noise, colors, and fragrance are truly palpable to the viewers of his works.

He saw Karachi, Lahore, Amritsar, and several locations across Rajasthan, Delhi, Agra, Ahmadabad, Benares, Saharanpur, and Bombay during his visits. He visited certain places multiple times to really immerse himself in his surroundings and accurately depict their essence. His extensive sketches and photographic records served as a point of reference in his studio in Paris where he created acclaimed artworks.

Persian and Indian architecture featured frequently as resplendent backdrops of his works, contrasting with the seemingly mundane activities of the figures present. The details of the historical monuments he depicted are accurate and recognizable even now over a century later, further highlighting his keen eye. His first visit around 1883 resulted in one of his best-known masterpieces, The Arrival of Prince Humbert the Rajah at the Palace of Amber.

Weeks’ painting, The Return of the Imperial Court from the Great Mosque at Delhi, in the Reign of Shah Jahan, is believed to have been inspired by another exemplary traveler-artist and Russian Orientalist, Vasily Vereshchagin, who much like Weeks, also undertook three extended voyages to India during the 19th century. The referenced painting by Weeks evidences inspiration from Vereshchagin’s The State Entry of King Edward VII, then Prince of Whales into Jaipur in 1876.

Weeks visited India for the third and final time in 1892. Unlike the other two visits, this journey was a result of a commission from Harper’s Magazine. Weeks along with writer Theodore Child were chosen to catalog the experiences of the Orient; Child was charged with the literary role while Weeks was assigned to pictorial illustrations of their journey.

Weeks and Child traveled via an overland route from Turkey to India by the Trans-Caspian Railway. The journey was fraught with danger due to the civil war in Afghanistan at the time and came to a standstill around northeastern Turkey when Weeks decided to follow an alternative way through Kurdistan to India. The pair had to travel through mountain routes and encountered innumerable hostilities in form of robbers, extreme weather, and disease. In fact, Theodore Child succumbed to cholera in Persia around November 1892, leaving Weeks alone to complete the journey.

After the death of his companion, Weeks contributed both the writings and the illustrations, which were published between 1893 and 1898 and entitled, From the Black Sea through Persia and India.

In the writings composed for the travelogue, Weeks expressed his appreciation for the modern colonial infrastructure and buildings of this period and was even complimentary of the facilities instituted by the British Raj. However, his paintings had an entirely pre-colonial focus. His paintings of India were set within locations of historical importance, often Mughal architecture, and did not depict the more recent colonial structures. Utilizing a backdrop of these grand historical structures, Weeks favored the moment of the arrivals and departures of local royalty in traditional garb and headdresses, complete with gilded howdahs, elaborately decorated elephants, and often with an entourage of uniformed soldiers.

Weeks’ remarkable works were exhibited in the United States and Europe and he gained international distinction for his captivating subject matter that resonated with viewers across the world. His works demonstrate his keen eye for detail as well as his great enthusiasm for Eastern cultures that he conveyed with confident brushstrokes. These paintings, although idealized, evoke a perceptive sense of nostalgia for a world long forgotten.

Cattedrale di Santa Maria del Fiore, or the Duomo of Florence, along with Giotto’s Campanile and Baptistery of Saint John are designated UNESCO...