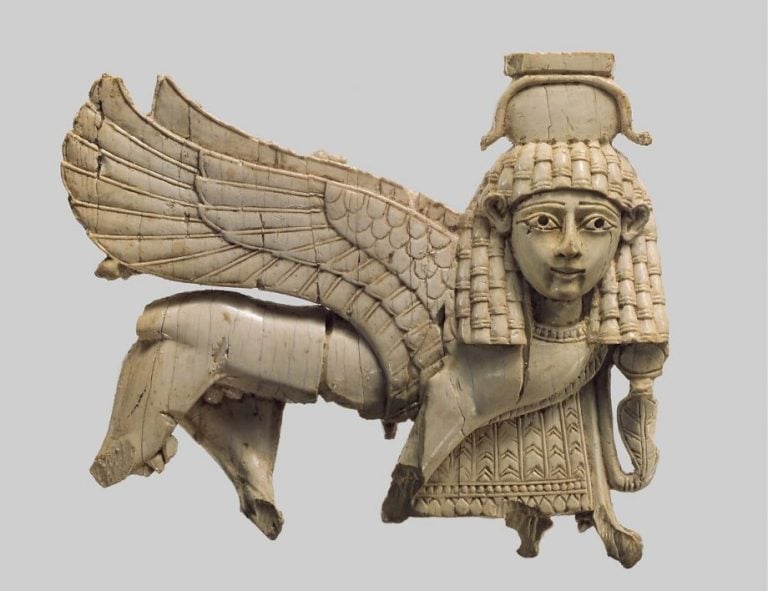 The allure of ivory, a lustrous material that gleams and glows when polished, exudes warmth and mysterious beauty. Near Eastern ivory carvings are eerily seductive and hauntingly beautiful. Imagine the thrill of finding such exquisite artifacts. These forgotten treasures once adorned furniture, decorated walls, rooms, chariots, and horse bridles or embellished personal luxury items. Here is a peek into their tumultuous past.

Since the majority of Near Eastern ivory carvings were discovered at ancient Assyrian sites, here is a brief history of the Assyrian Empire. Assyria was a kingdom located in northern Mesopotamia where the Tigris and Euphrates rivers flowed. The ancient kingdom spanned over four present-day countries: northern Iraq, southeastern Turkey, western Syria, and Iran.

The Assyrian Empire was extremely powerful and controlled a vast area that stretched all the way to the Mediterranean. The Assyrians had a reputation for being great warriors; they were the first to use chariots and were fiercely intimidating with their deadly, iron weapons. Their greatest cities were Ashur, Nineveh, and Nimrud. Ashur was their first capital city and also the name of their most important God.

The Neo-Assyrian Period was the last great era the Assyrians ruled. It was during this period that many of the exceptional ivory carvings were created between the 9th-7th centuries BCE. It was also during this time that the Assyrians re-expanded their empire and controlled the greatest amount of land throughout their entire history.

Most of the ivory carvings discovered at ancient Assyrian sites were carved from elephant tusks sourced from Syrian elephants until the animal became extinct sometime between the 8th and 7th century BCE. Ivory was then imported from Egypt and other parts of Africa.

In the ancient Near East, ivory carving was a valuable industry and it is likely that every major city center had ivory workshops, including those specializing in creating luxury items for royalty and the elite. Ivory is easy to carve, it’s an organic material that endures time. Ivory carving traditions were found in the regions of the ancient Near East and each culture possessed its own distinctive styles and techniques.

Assyrian ivory artisans employed a range of techniques. One, in particular, was the use of silhouette figures incised onto thin pieces of ivory. They carved two-dimensional, flat images that were less extravagant than artisans from other regions. Assyrian ivory carvings were stylistic, decorative, and figurative. They were known for their low-relief modeled narrative scenes and animal friezes with openwork panels.

North Syrian ivory artisans carved in a high relief style and opted for more round-faced figures with gigantic eyes and their hair in ringlets. They often portrayed contest scenes and were more influenced by the Phoenician style rather than the Egyptian. The South Syrian/Intermediate artisans are considered by some scholars to be a hybrid of North Syrian and Phoenician styles.

Phoenician artisans excelled at carving ivory. They were experts in ornamental crafts and specialized in decorative objects. Their ivory carvings were traded throughout the near east and Mediterranean regions. Phoenician ivories drew largely from Egyptian art styles and they also employed a strong use of color. Their ivories were carved in high relief with openwork designs and poised figures. Many of their designs were marked with Phoenician letters on the back side, likely to act as a guide for assembling certain objects.

Although ivory carving traditions varied in style and technique, all regional ivory artisans were influenced by each other to some extent and often depicted similar motifs. Ivory carvings from all traditions were usually colored or gilded, but not all were inlaid with precious stones or colored glass.

The Iconography of Ivory Carvings

The iconography of Near Eastern ivory carvings from the Neo-Assyrian Period was quite diverse. Male and female figures were represented, courtiers and tributaries were popular characters as well. The ivory carvings also depicted animals: lions, cattle, or deer, and mythical, winged creatures: sphinxes, griffins, and genies. Floral and decorative, geometric motifs were also part of artistic compositions.

Although thousands of ivory carvings have been discovered at ancient Assyrian archaeological sites that include Nimrud and Khorsabad (both in Iraq) and Arslan Tash (Syria), the majority of these ivories came from elsewhere and were made by people from other cultures, primarily the Phoenicians. They were either looted, given as gifts, or imported as luxury goods from around the Mediterranean and Near East. It’s likely that the true origin of these ivories is Levantine.

In ancient Mesopotamia, ivory was associated with wealth, royalty, and luxury. A large majority of ivory carvings were small plaques that were used in elements of furniture decoration, wall décor, or used as altars. Furthermore, personal objects such as decorative cosmetic boxes and handles for daggers, fans, mirrors, or fly whisks were embellished with this ghostly material.

Out of all the ancient Assyrian sites, the largest bounty of ivory carvings was discovered at Kalhu, present-day Nimrud, in Iraq. Many of these ivories were first unearthed by Austen Henry Layard, a British archaeologist during the 19th century. Nearly a century later, a vast majority of ivory carvings were excavated by British professors of archaeology Max Mallowan and David Oates who worked at the site from 1949-1963 together with the British School of Archaeology in Iraq. Many of these artifacts were discovered in the royal buildings at the palace of King Ashurnasipal II. Ivories were found in residential suites and storerooms with some discovered at the bottom of palace wells.

At one of the most significant royal buildings, Fort Shalmaneser, the majority of ivory carvings found were furniture plaques. In some cases, ivories were found piled up in storerooms intended for burning while many were found already burnt and broken. Looters had already stripped many of the ivories of their precious gemstones or gilding, which they considered to be more valuable than the ivories themselves.

Several collections of Near Eastern ivory carvings are found at various institutions worldwide. The largest collection can be found at the British Museum with well over 6,000 ivories under protection. Other major ivory collections include the Sulaymaniyah Museum in Kurdistan, Iraq, the Metropolitan Museum of Art in New York, US, the Birmingham Museum and Gallery in England, and the Cleveland Art Museum in Ohio, US.

In recent years, a large number of Near Eastern ivory carvings were destroyed, along with other valuable artifacts, by the Islamic State (ISIS) in an attempt to erase the history and memory of ancient native cultures in Iraq. These priceless ivories of the ancient Near East not only reflect the remarkable history and culture of antiquity. They provide us with a sense of wonder and appreciation for an art form that is highly controversial in today’s world.