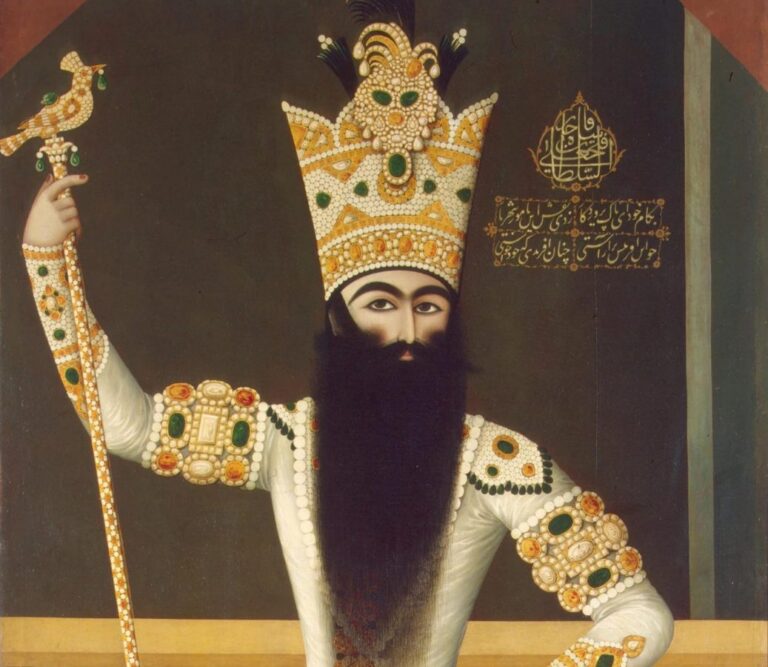 I’m sure you’re well acquainted with European royal portraiture. But have you ever seen portraits of rulers from beyond Europe? We want to show you stunning examples from Qajar Dynasty in Persia, contemporary Iran. Time for Qajar portraits by Mihr ‘Ali depicting Fath Ali Shah, a prominent Persian ruler and an art patron.

Qajar dynasty ruled the Persian Empire from 1781 to 1925. Art, architecture, and other art forms produced during their reign are referred to as Qajar art. Furthermore, the country truly experienced an artistic boom thanks to this long period of relative peace. Fath Ali Shah was the second ruler who ruled in Teheran from 1796. He was a powerful art patron and a commissioner of stunning royal portraits which were meant to serve as propaganda, immortalizing him and presenting him as an exquisite monarch.

Mihr ‘Ali was one of the major Persian court painters from the beginning of Fath ‘Ali Shah’s reign. He was a brilliant artist. For example, in the portrait below a rectangular cartouche is a poem which claims that Allah himself depicted the monarch (although the painting also bears the date and signature of Mihr Ali). Meanwhile in the portrait above the shah is smoking a water pipe and the boy is most probably his grandson.

The Qajar portraits demonstrate a hybrid between European trends and the Persian tradition; Shah is shown full length, standing, like in European royal portraits. Yet at the same time, the portrait contains many hidden symbols, which is typical of Islamic art. Shah holds a scepter with a figure of a hoopoe on top. This is the prophetic bird of King Solomon (Suleiman) mentioned in the Quran, as well as a bird representing God in Sufi art. The three plumes of black crane feathers on top of his crown represent royal worth, which is also emphasized by the richness of ornament on his silk dress.