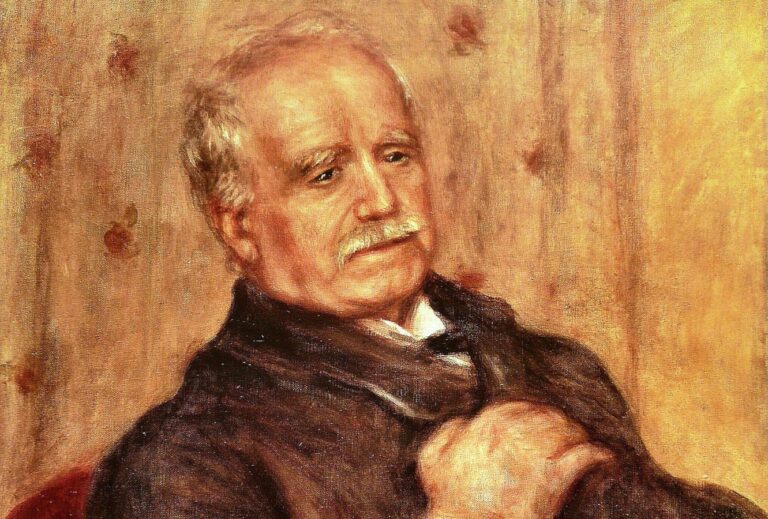 The story is known: at the end of the 19th century a group of young French artists dissatisfied with academic rules began to develop a new type of art which dealt with new themes and a offered a different technique. However, this group, which had at its core artists such as Monet and Renoir, did not achieve immediate success. The notoriety of the Impressionists owed much to a man, the art dealer Durand Ruel.

The history of Paul Durand-Ruel (1831-1922) begins, in fact, with his father, Jean Durand-Ruel. Jean owned a gallery at 103 rue des Petits Champs, and it was there that young Paul was specializing to become an art marchand.

In 1865, when Jean died and Paul inherited the gallery at the age of 34, he established a new professional philosophy and the gallery mission based on innovative principles for the time, such as the organization of individual exhibitions, promotion of art, and the creation of an international network of galleries. These principles guide the art galleries to this day.

In 1870, during the Franco-Prussian War, Paul left Paris to shelter in London. He saw in this forced stay an opportunity to expand his business, and hence he opened a gallery at New Bond Street.

Durand-Ruel continued to look for new artists he could represent, artists who produced art for the new century that was about to begin. And it was in London where he found them, when one day he met Claude Monet and Camille Pissarro, both of whom also took refuge in London.

Subsequently, the dealer bought some paintings of their paintings for his gallery, in the time when there was no commercial demand for them. The purchase of works provided a great relief to the painters who lived in constant financial trouble, since they did not paint according to the academic rules, and Monet, for example, had a wife and a baby to sustain. Paul, however, saw the potential of that new art, which had in its experiments with light and color its greatest characteristic. In 1876, he organized the second exhibition of Impressionists. It was a failure.

Yet Durand-Ruel kept insisting. He provided the necessary financial subsidies to the artists and organized some more exhibitions in Europe, although they were not very successful either.Only ten years after the second exhibition, things began to change. Durand-Ruel organized an exhibition in New York and its success was immediate. The American public was charmed by the paintings of Monet, Renoir and others, buying “moderately”, as the gallery owner said. Thanks to this credit, the French started to do similar.

The letters between the dealer and the artists reveal a man who was deeply sensitive and intelligent, and attentive to aesthetic innovations. He realized that they produced quality art and offered them not only financial but also emotional support. In letters to Monet for example, the dealer emphasized the importance of challenges and difficulties in life which should be treated as lessons.

Durand-Ruel was fundamental to the success and recognition of the Impressionists. Nowadays he is also recognized as one of the forerunners of the modern art market, as we know it today. And partly thanks to him and his insistence, Impressionism triumphed as one of the most important movements in the history of modern art.

You can also like this article about the exhibition held in 2015, in his honor.