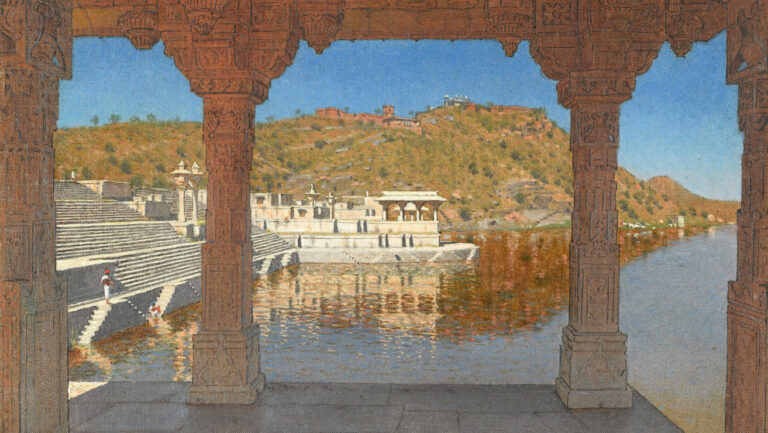 Vasily Vereshchagin was a notable Russian solider, artist and writer in the 19th century. He was an outspoken critic of war who reformed the genre of war paintings by dispensing with traditional conventions that glorified war. As a prominent member of the Russian intelligentsia, Vereshchagin used his artworks to speak out against the atrocities of war and Russia’s colonial expansion efforts.

Though best known for his depictions of war, Vereshchagin also rendered many artworks chronicling his extensive travels all over the world – both as an artist and as a soldier in the Imperial Russian Navy. The India series was a definitive part of Vereshchagin’s lifework and is a powerful portrayal of India under the British Raj.

Vereshchagin was only eight years old when he was enrolled in the Aleksandrovsky Junior Military School at Tsarskoe Selo. He later advanced to the Naval Cadet School in Saint Petersburg and made his first voyage with the Sea Cadet Corps in 1858. Though he was one of the top graduates of the naval school, he soon left military service to focus on his artistic training. A mere two years later in 1863, he won a medal from the Saint Petersburg Academy of Arts for his painting “Ulysses slaying the Suitors”. Vereshchagin then further honed his artistic talents in Paris at the École des Beaux-Arts under the noted Realist Orientalist of the 1850s and 1860s, Jean Léon Gérôme.

The influence of Gérôme’s Turkish and Egyptian genre scenes had a profound effect on Vereshchagin’s art. Though he grew restless and dissented widely from his master’s methods, Gérôme’s instruction is immediately apparent in Vereshchagin’s works — in the choice of subject, attention to fine detail and the masterful implementation of light and color.

Vereshchagin was best known for his realistic depictions of war. His canvases are reflective of his extensive experience as a soldier and a war correspondent in the heart of the battle and were intended as a social commentary on the horrors of war. They were sometimes so grotesque that they were rejected by the public. His service in the Russian Navy and his wanderlust led him to travel extensively all over the world throughout his incredible life. He gained much acclaim as a painter and captivated audiences in Europe and the United States.

Vereshchagin traveled to India and Tibet in 1873 and again to India in 1884 to gather ethnographic materials that he used to create a series of studies devoted to the Indian subcontinent. He embarked on this journey with his wife that commenced at Saint Petersburg, through Constantinople, Egypt and the Himalayas and concluded in India and Tibet. The perilous route often necessitated difficult journeys on the backs of horses and camels and sometimes even on foot.

He extensively toured the Himalayan region where he spent months sketching the mountainous terrain. The couple once attempted to ascend the Dzongri peak in West Sikkim, which is at an altitude of 13,123 feet. Unfortunately, it was the month of January and the couple nearly froze to death in the ice and snow and were unable to complete the difficult trek.

In addition to the bitter, sub-zero temperatures, Vereshchagin encountered dangerous wild animals, survived near-drowning, and even contracted malaria in the tropical heat, but his enthusiasm did not wane. In India, Vereshchagin saw the incredible natural landscape and rich cultural heritage of an ancient people, as well as their plight at the hands of the British colonialists. He found much inspiration in the bright colors and diverse terrain of these exotic lands. The India series featured studies of mountain passes, native people, temples, cultural life, and awe-inspiring architecture – all realistically captured with painstaking attention to detail.

English officers in India regarded Vereshchagin with amusement for his eccentric disposition and were complimentary of his obvious artistic talent, but they were wary of his military background and the precise nature of his renditions of mountains passes and buildings as they suspected that he was a Tsarist spy on military reconnaissance efforts. However, Vereshchagin’s works were in fact, apolitical depictions of the exotic sights and sounds that he witnessed in the Indian subcontinent.

The Pearl Mosque or the Moti Masjid in Delhi was commissioned in 1659 by Emperor Aurangzeb as a private mosque within the high walls of the Mughal Capital – the Red Fort. Vereshchagin visited this mosque and was profoundly moved by the solemn effect of light on the immaculate white marble walls on all sides. His rendition of the Pearl Mosque at Delhi is often termed the most accomplished painting from the India series as it showcases his extraordinary ability to render overwhelmingly peaceful compositions such as this with the same dexterity as his war scenes.

This composition is a remarkable example of the successful treatment of broad expanses of white. The white marble walls and floors are painted in painstaking detail and the effect of diffused light is portrayed by strong reflections to create a striking effect. Further, the clothes of the men praying in the portico sharply contrast against the otherwise large masses of white. The sheer magnitude and explicit detail of Vereshchagin’s Pearl Mosque at Delhi left a tremendous impression worldwide. This painting now belongs to a private collector.

Prince of Wales at Jaipur

The Prince of Wales at Jaipur is another notable composition from Vereshchagin ‘s India series. At 23 feet wide and 17 feet tall, it is a very large canvas chronicling the royal entry of the Prince of Wales into Jaipur. It depicts in great detail, the State procession of the Prince of Wales passing through the Ambar-Chaupar in Jaipur, Rajasthan in 1876. The Prince and a Maharaja are seated on the first elephant with Sir Alfred Lyall behind them. Other British nobles and attendants are similarly seated on the following elephants. The procession is accompanied by soldiers and several attendants on both foot and horseback. This painting is on display at the Victoria Memorial Hall in Kolkata, India.

During the Russo-Japanese war, Vereshchagin was invited by Admiral Stepan Makarov to join him aboard the flagship, Petropavlovsk. On April 13, 1904, two sea mines struck the Petropavlovsk and the ship along with most of its crew including Admiral Makarov and Vereshchagin perished in the wreck. According to eye-witnesses, Vereshchagin spent the final moments of his life calmly painting the scenes unfolding in front of him – a council of war presided over by Admiral Makarov. The painting was recovered from the wreckage almost undamaged.

Though now relatively unknown, Vereshchagin was a talented artist with a larger-than-life personality and a long and successful career in his time. He participated in more than thirty solo-exhibitions in Europe and America in the last decade of his life. Vereshchagin’s s grand works are a testament to his inspiring life as a soldier, a traveler, a writer, and an artist. Most of Vereshchagin’s works are now displayed at the State Tretyakov Gallery in Moscow and the State Museum of Russian Art in Saint Petersburg.