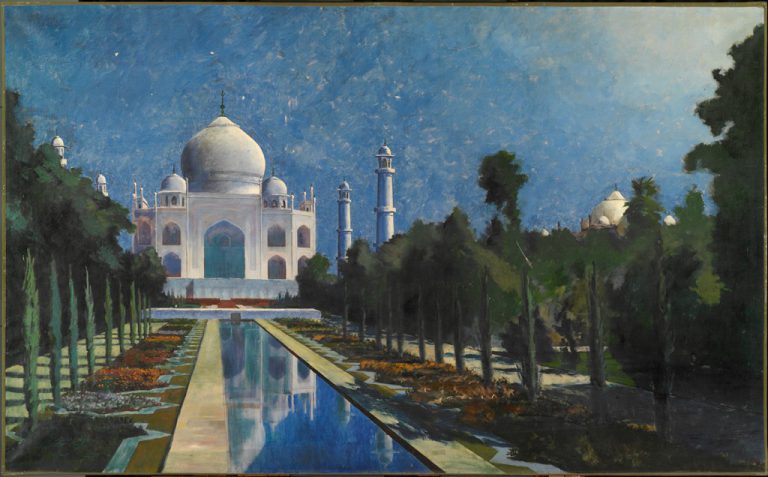 Located on the southern bank of the river Yamuna in Agra, a little over a 100 miles outside New Delhi, is India’s most famous monument and one of the most recognizable architectural marvels of the world. It is definitely worth travelling to view this work of art. Almost four centuries later, the Taj Mahal stands proudly as a reminder of Mughal magnificence and the symbol of an emperor’s incomparable grief over losing his most beloved wife, Mumtaz Mahal. The Taj Mahal is the pinnacle of Mughal construction and is truly one of the most beautiful mausoleums ever created.

The Reign of Shah Jahan

Shahab-ud-din Muhammad Khurram, better known by his regal name of Shah Jahan, was the fifth emperor of the Mughal dynasty. The wealth of the Mughals and their patronage of the arts had brought about an era of much artistic and architectural proliferation. Shah Jahan was responsible for the commission of many buildings that are all extraordinary examples of Indo-Islamic architecture from this period. The Taj Mahal, however, is the crowning glory, not just of Shah Jahan’s reign, but of the entire Mughal era.

Mumtaz Mahal was born as Arjumand Banu Begum in the city of Agra. She was the daughter of an important Persian courtier in Jahangir’s administration and was the niece of Empress Nur Jahan. It was Nur Jahan who arranged the marriage of her niece with the young Prince Khurram, one of many carefully orchestrated schemes intended to solidify her position in the royal family by appointing her relatives to prominent positions.

Although Mumtaz Mahal may have lacked her aunt’s political ambitions and successful career, her husband’s infatuation ensured her a prominent place in Mughal history. Shah Jahan was deeply enamored with his favorite wife and conferred upon her the grandiose title of Mumtaz Mahal or “the exalted one of the Palace”. Mumtaz Mahal became his favorite wife and she bore him 14 children, ultimately dying while in labor with their fourteenth child. It is believed that the Taj Mahal was a deathbed promise made to Mumtaz Mahal by the distraught Shah Jahan who promised to build her the most beautiful tomb ever known.

The Taj Mahal is undoubtedly one of the most beautiful funerary monuments in the world. The mausoleum is at the heart of a large complex set within a walled garden.It also contains structures of red sandstone containing a mosque with an assembly hall, as well as smaller structures containing the mausoleums for Shah Jahan’s other (less fortunate) wives. The buildings are set within carefully planted groves of fragrant trees and flowers, evocative of the gardens of paradise described in the Quran. The gardens are sectioned into proportionate quadrants with reflecting pools and fountains that add to the grandiose effect of the marble monolith.

The main mausoleum is the only white marble structure within the Taj Mahal complex and is characterized by the iconic arch and dome flanked by minarets on all four sides. It has rightly been described as a dream in marble. Vegetal and arabesque patterned reliefs and Quranic calligraphy inlays adorn the walls that continue throughout the interior and exterior of the marble structure. The inlays are of crystal, lapis lazuli, marble, turquoise, jade, and amethyst. The interior of the Taj Mahal is an octagonal chamber, heavily ornamented with a latticed screen or jali containing the cenotaphs of both Mumtaz Mahal and Shah Jahan. The actual crypts of the royal couple lay in the levels below.

The meticulous symmetry of the Taj Mahal is in keeping with the doctrines of Mughal architecture. The symmetry continues throughout the complex, only to be disturbed by the placement of Shah Jahan’s cenotaph. While the cenotaph of Mumtaz Mahal is right in the center of the main chamber, Shah Jahan’s cenotaph is peculiarly positioned west of the central axis. This odd placement is believed to be due to the fact that Shah Jahan never intended to be laid to rest here.

Commission of the Monument

The construction of the Taj Mahal was the work of about 20,000 skilled workers including carvers, artists, and stone masons, procured from all across present day Turkey, India and Iraq. There is a popular legend in India that Shah Jahan was resolute in his quest to make this exquisite mausoleum, one of a kind, and to ensure that no one could ever recreate the Taj Mahal, Shah Jahan ordered that the hands of the workers be severed and their eyes gouged out. Fortunately, there is no evidence to support this gruesome legend.

There are also popular legends about Shah Jahan’s intention to create a shadow image of the monument across the river from the Taj Mahal in black marble as his own final resting place. The black Taj Mahal never came to fruition as Shah Jahan was usurped by his son and successor, Aurangzeb, and imprisoned in the nearby Agra Fort in his twilight years. Historians have, however, also dismissed this as folklore. After being imprisoned by his son, a frail and ailing Shah Jahan spent his final days looking at the Taj Mahal from the Agra Fort until the year 1666 when he was laid to eternal rest next to his beloved wife.

Though we highly recommend visiting this beautiful monument in person, in the meantime you can visit the Taj Mahal virtually, here!