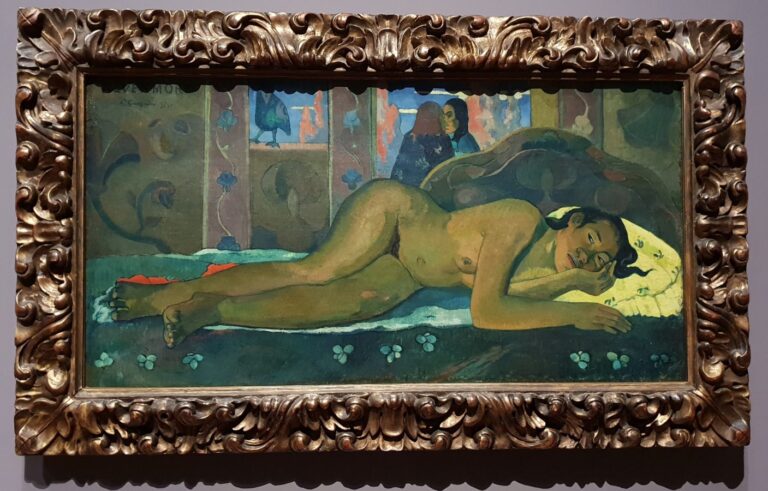 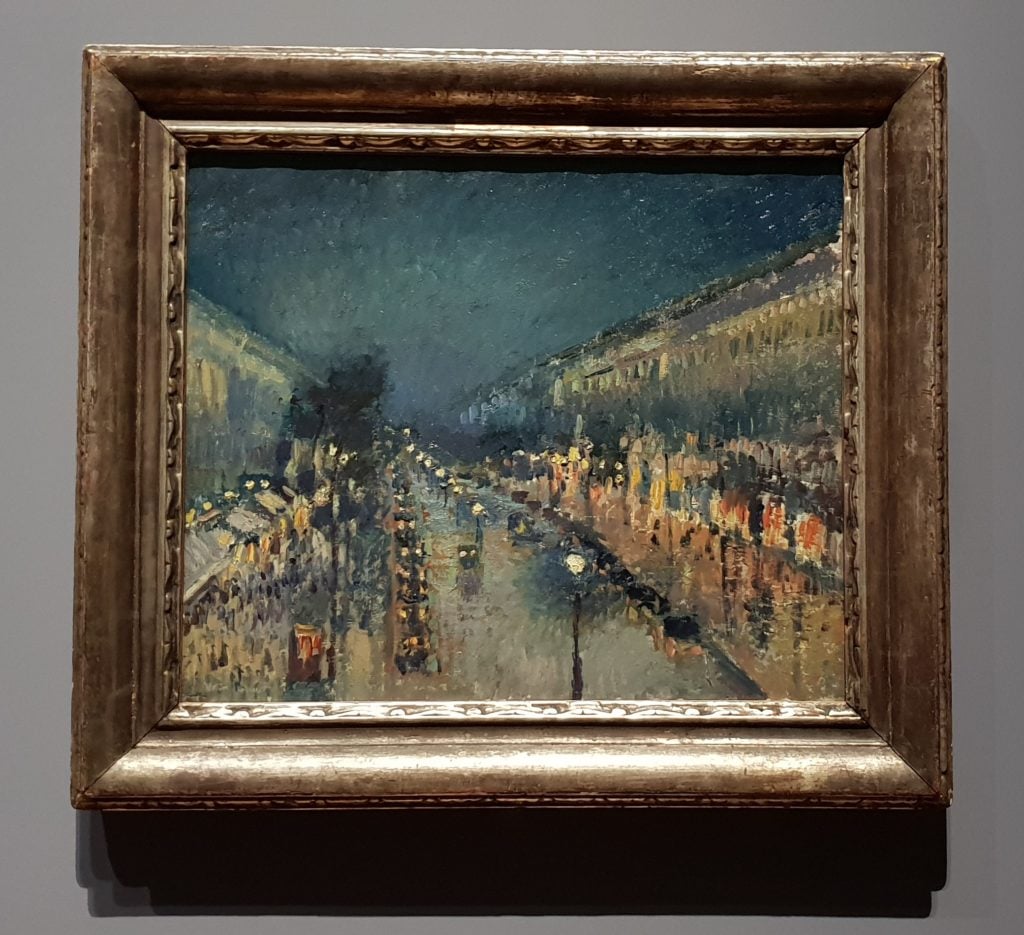 Camille Pissarro, The Boulevard Montmartre at Night, 1897, The National Gallery London[/caption] The exhibition is set in the three rooms of The Wohl Galleries and within those packs over forty paintings by twelve artists. It is a crash course in Impressionism and Post-Impressionism. Each artist presented through the lens of just few works, creating a condensed impact. 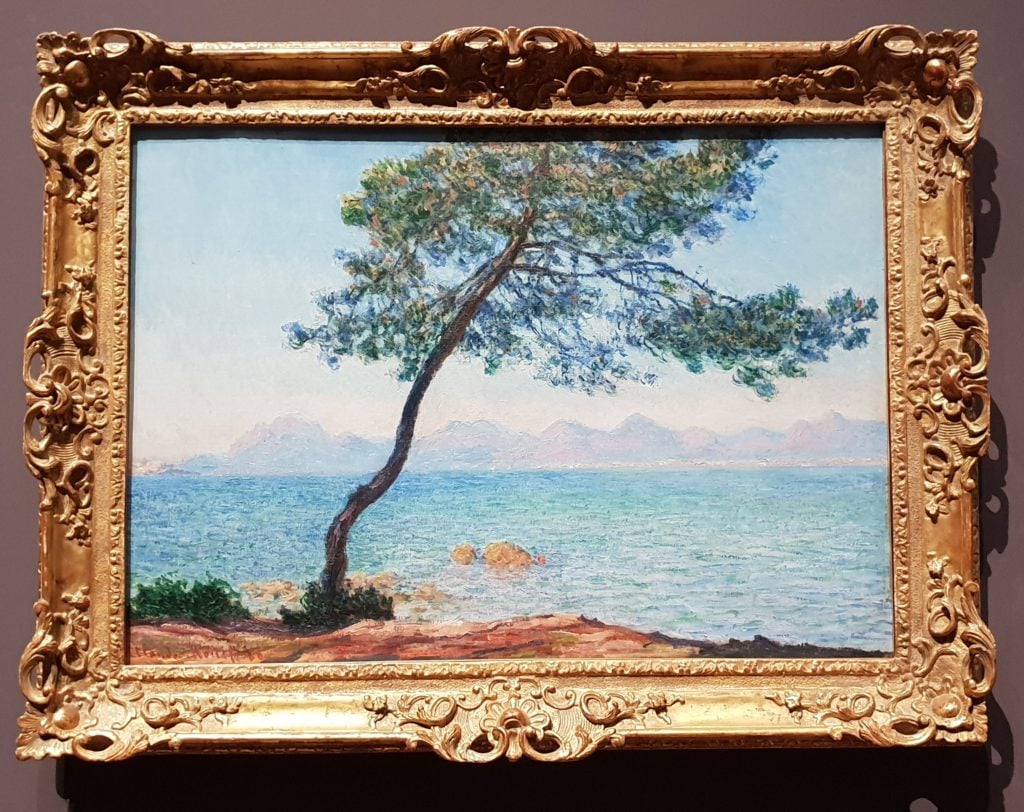 Claude Monet, Antibes, 1888, The Samuel Courtauld Trust, The Courtauld Gallery, London[/caption] Because we only get a glimpse of each artist’s oeuvre their individual styles are brought into sharp focus. They stop being the blended group of Impressionists and Post-Impressionists. Each of them stands on his own, each different from the rest. 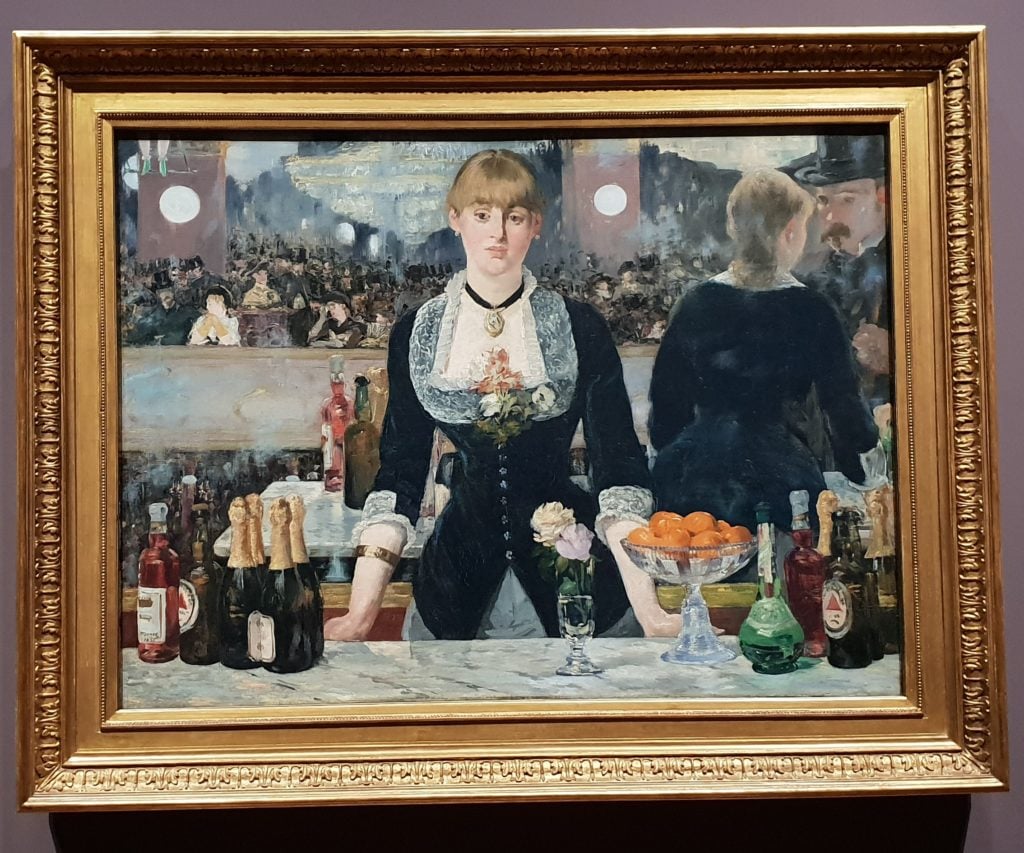 Edouard Manet, Bar at the Folies-Bergere, 1882, The Samuel Courtauld Trust, The Courtauld Gallery, London[/caption] The fact that Manet’s and Monet’s paintings hang next to each other is interesting. Either an ironic joke at the expense of people who mix those painters up. Or an attempt to educate them once and for all. So that never ever again a Manet is confused with Monet! 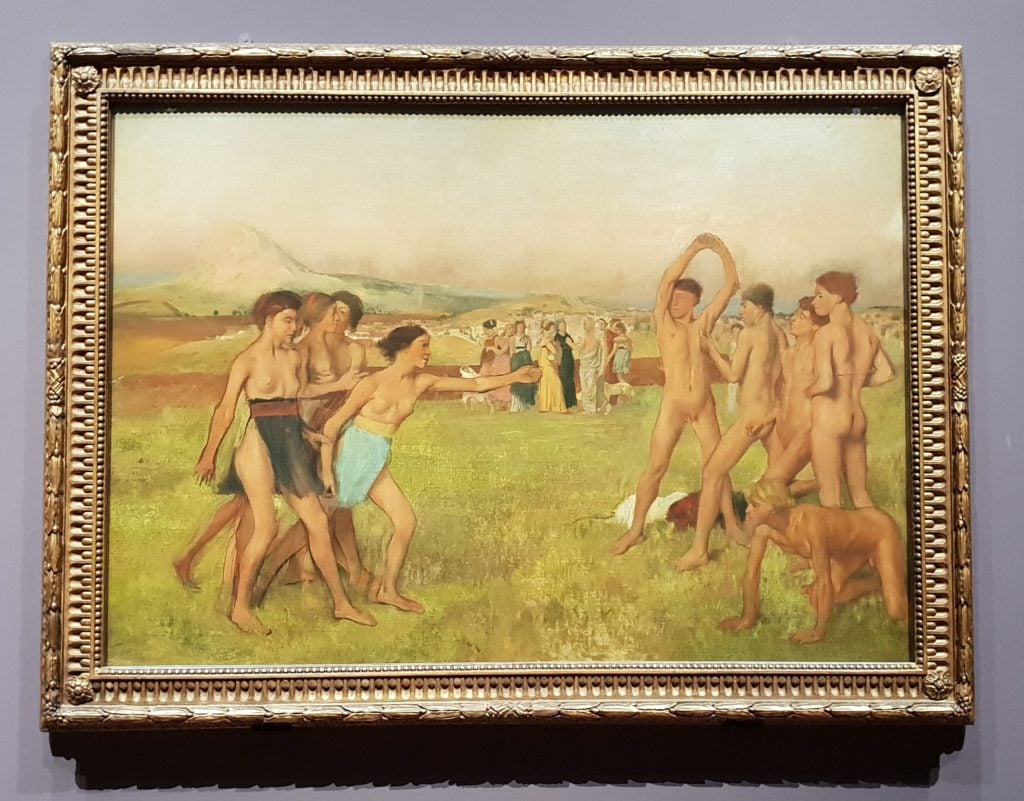 Edgar Degas, Young Spartans Exercising, ca 1860, The National Gallery London[/caption] Some of the painters are represented by their most typical work, others through works that stand out from their oeuvre. This work of Edgar Degas is very different from the ballet dancers he is mostly associated with. A strong and simple composition, so full of clarity and discipline. 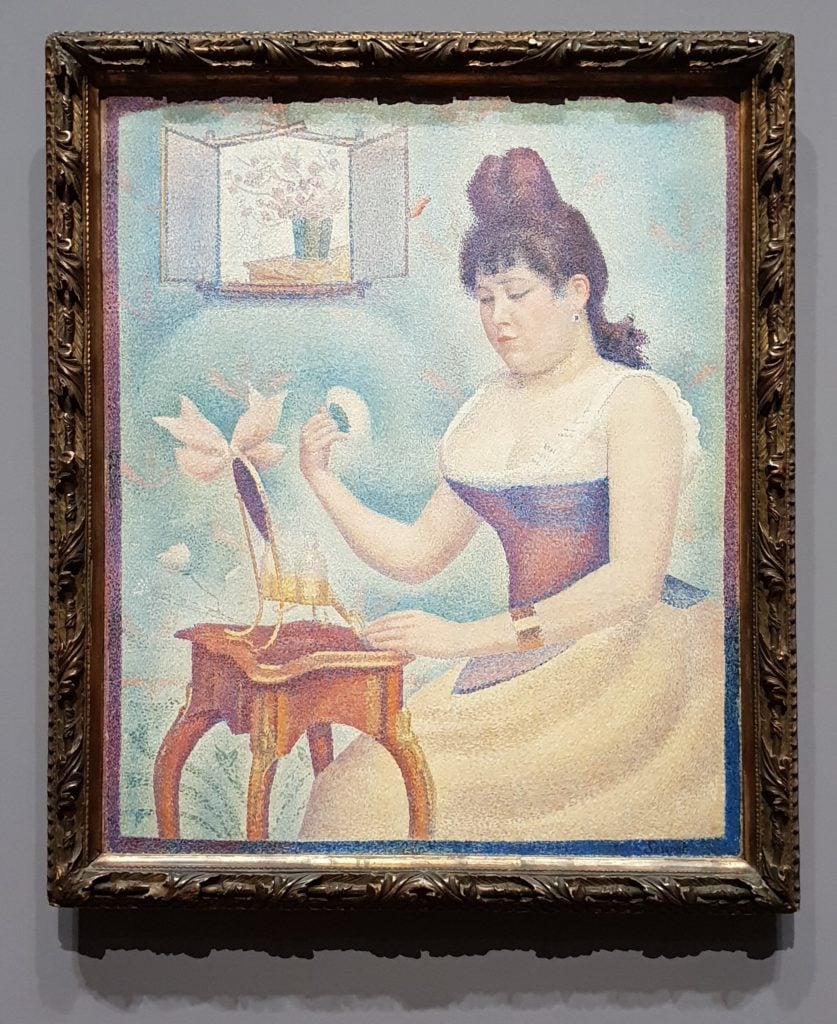 Georges Seurat, Young Woman Powdering Herself, ca 1888-90, The Samuel Courtauld Trust, The Courtauld Gallery, London[/caption] I was blown away by Georges Seurat’s Young Woman Powdering Herself. Right next to it were a lot more known Bathers at Asnières. But the young woman was so full of charm I could not stop looking at her. It is a good chance to discover some of the less known works of those artists.

Henri de Toulouse-Lautrec, Jane Avril in the Entrance to the Moulin Rouge, putting on her Gloves, ca 1892, The Samuel Courtauld Trust, The Courtauld Gallery, London[/caption] Jane Avril famous from Henri Toulouse-Lautrec posters is shown here not in her scene persona, but outside of Moulin Rouge. The painting is very different from the typically loud and full of warm colours posters created by this artists. It’s almost as if it tried to highlight how very different real life is from the stage. All the way to complete change of the colour palette. 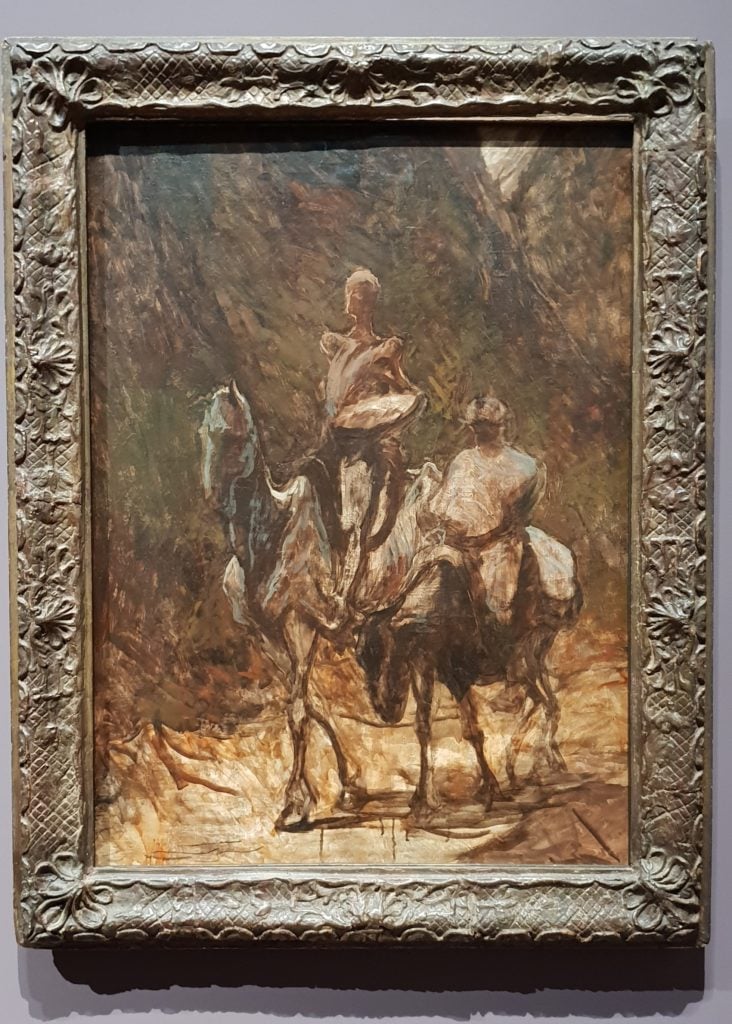 Honore Daumier, Don Quixote and Sancho Panza, ca 1868-72, The Samuel Courtauld Trust, The Courtauld Gallery, London[/caption] Daumier typically associated with his prints and drawings here has a chance to show his painter’s skills. His palette dark, his paintings focused on reflecting the atmosphere more than anything else. It is interesting to observe how different medium of expression impacts his work. 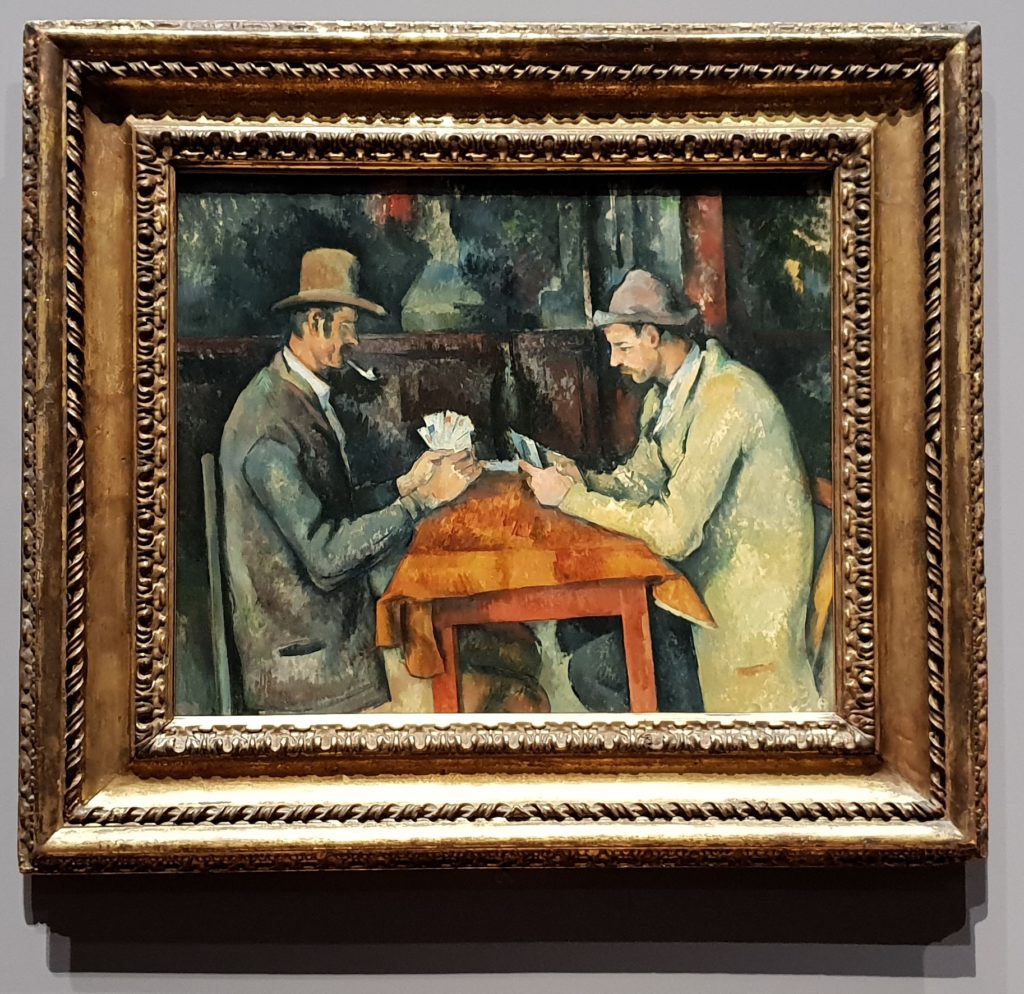 Paul Cézanne, The Card Players, ca 1892-6, The Samuel Courtauld Trust, The Courtauld Gallery, London[/caption] Cézanne is quite well represented, there are a few of his still lives, several landscapes. They all give us a great sense of his focus on structure, but nothing drives it home like this painting. It shows he was a painter consistent in his explorations, but not limited by them. 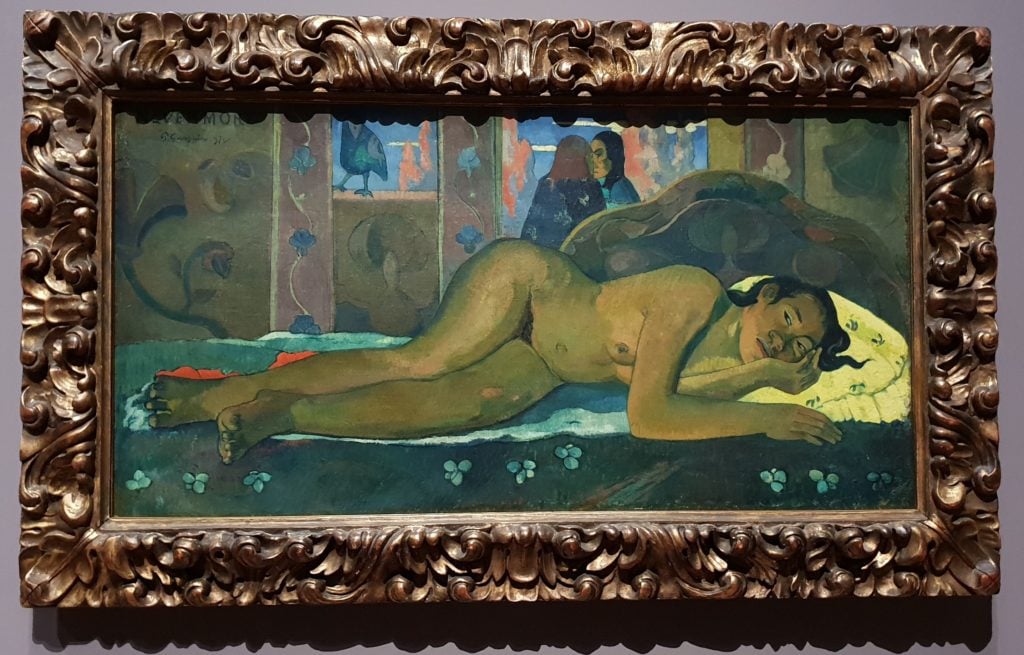 Paul Gauguin, Nevermore, 1897, The Samuel Courtauld Trust, The Courtauld Gallery, London[/caption] As you scroll through this article you will notice that there are quite a few paintings of women. They all seem very focused, introspective and detached. Even when they look straight at the viewer they seem not to connect with us. As if they are occupied by their own internal struggle and problems. It is a pity that no woman painters are presented in the exhibition. 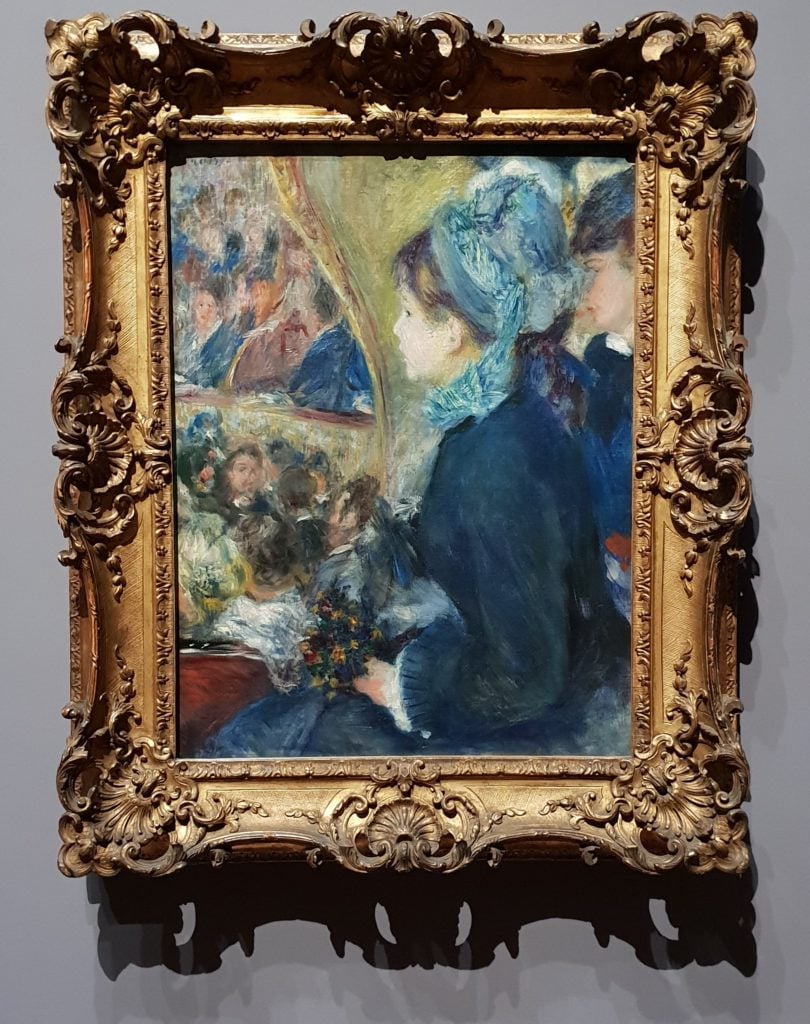 Pierre-Auguste Renoir, At the Theatre, 1876-7, The National Gallery London[/caption] Impressionists were often inspired by photography. This painting is a clear example of this trend. Clearly it is captured like a photo frame, with the feeling of being transient and unfinished. Just snapped and captured in the moment, an ambition that Impressionism shared with photography. 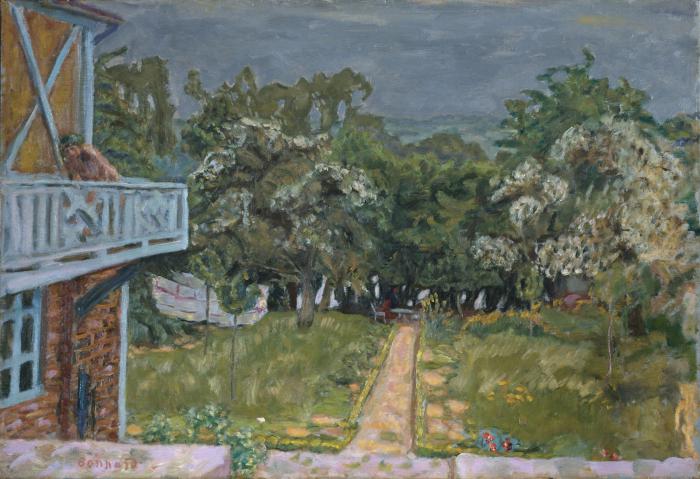 Pierre Bonnard, Blue Balcony, 1910, The Samuel Courtauld Trust, The Courtauld Gallery, London[/caption] The exhibition has its highlights, but it also has its worse moments. For example, I was not convinced by Pierre Bonnard’s works selected. They felt like they did not meet the mark set by the other painters. Nor did they tell me anything new about Bonnard as a painter. 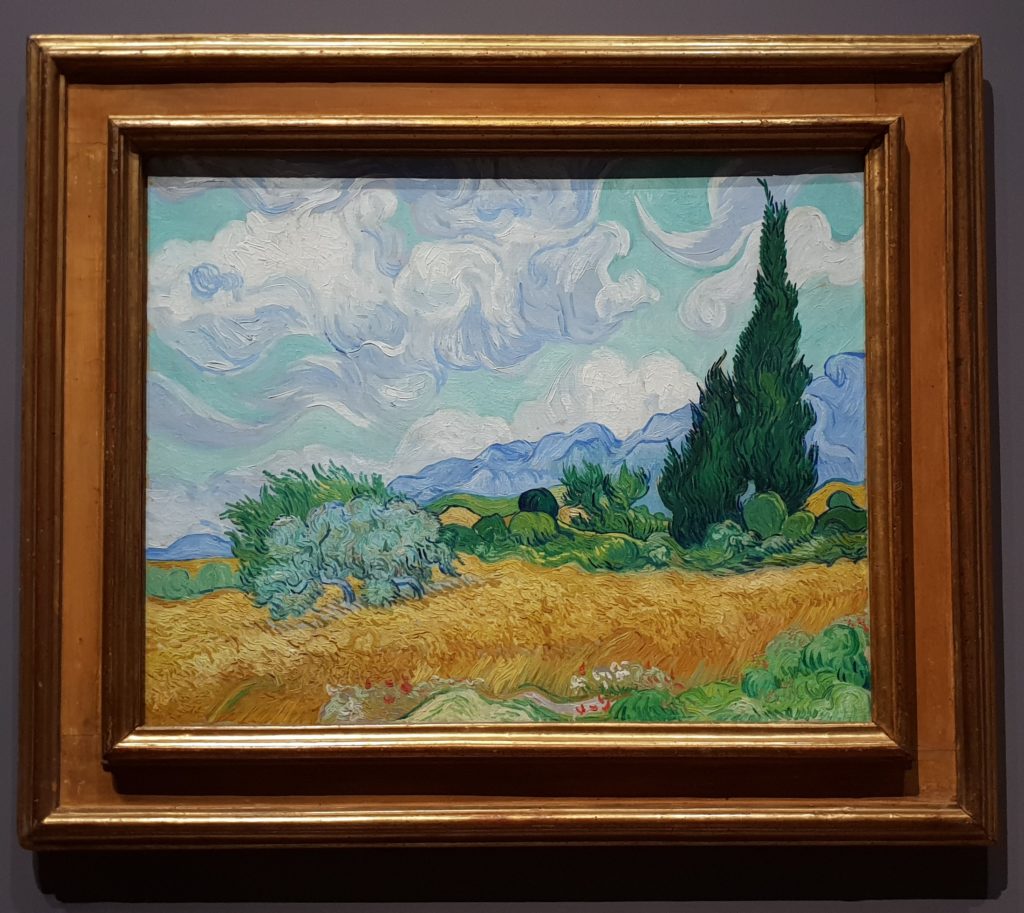 Vincent van Gogh, A Wheatfield with Cypresses, 1889, The National Gallery London[/caption] Yet, it only took a few steps to allow our eyes to rest on true masterpieces. This was the main charm of this show, it was like a box of chocolates, compact and varied and most of them very, very tasty. It did not aim to change our ideas about Impressionists and Post-Impressionists. Rather it makes sure we’re acquainted with them and with Samuel Courtauld, without whose passion for art those paintings would never be brought together in the United Kingdom.

Courtauld Impressionists: From Manet to Cézanne

Here is some more related reading:

Pierre-Auguste Renoir, The Theatre Box – you can see this painting at the exhibition

Montmartre – The Home To Many Inspirations

Monet’s Bordighera Paintings – A Backgroud Story For A Love Affair

When Art Hurts: The Story Of The French Painter Auguste Renoir