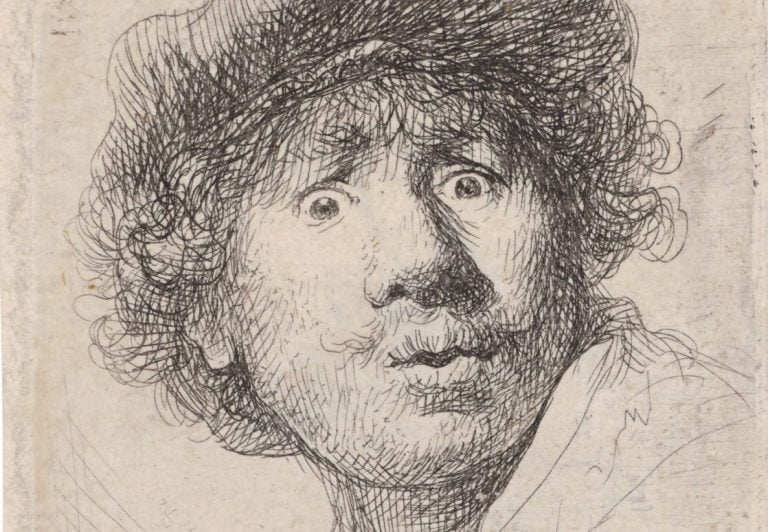 Rembrandt van Rijn, one of the greatest painters and printmakers in European art, was born 416 years ago in Leiden, Netherlands. Today, people take selfies. Back then, Rembrandt painted them. He created nearly 100 self-portraits during his lifetime, including approximately 50 paintings, 32 etchings, and 7 drawings. These self-portraits create an astonishingly accurate visual diary of the artist over a span of 40 years. Here we present 6 magnificent examples of Rembrandt’s self-portraits that show all the good and bad things that happened to him in his life.

Here, Rembrandt is 22 years old and this painting seems to be his first known self-portrait. Early in his career, Rembrandt used this form of a portrait to experiment with facial expressions or to explore the effect of light and shade. Such physiognomical studies are called tronies. Here, he used chiaroscuro effect – look at his face, where the light glances along his right cheek, while the rest of his face is veiled in shadow.

This is one of Rembrandt’s early self-portraits from his Leiden years. It is also one of a small group of etchings in which he used his own image to experiment with various quirky facial expressions that might serve as models for his work and that of his pupils. Lots of these prints are only a little bigger than postage stamps. In this case, Rembrandt wears a cap and looks surprised. Classic Rembrandt!

This painting is unique in that it is the only self-portrait depicting the artist full-length. X-rays of the panel have shown that Rembrandt shortened his legs and then later hid them totally behind the dog. He also changed his hair. The “Oriental” costume was frequently used by Rembrandt in biblical scenes or figures of fantasy to create an image that evoked distant and exotic lands, for which there was growing interest in Holland.

This is a unique double portrait of Rembrandt and his wife. The left side of the canvas was cut, perhaps by the artist himself, to remove secondary characters and focus the observer’s attention on the main theme. The painting was created when the artist was at the height of his fame. Marriage to Saskia van Uylenburgh was also the happiest time in his life, which was interrupted by the her premature death in 1642. Thanks to the relationship with this daughter of the mayor of Leeuwarden, Rembrandt was promoted socially and through a number of orders became a wealthy man. Saskia was his favorite model and often posed for him.

This is the first self-portrait Rembrandt painted since 1645. During the previous seven years, he focused instead on landscapes and intimate domestic subjects. 1645 was the year when his financial difficulties began, and he breaks with the sumptuous finery he had worn in previous self-portraits. In composition, it is very different from his previous self-portraits and shows the painter in direct frontal pose, with hands on his hips and an air of self-confidence. That’s a very strong image of a struggling man.

The artist is 63 years old here. It may be the last self-portrait Rembrandt painted, as it dates from 1669, the year when the artist died. The expressive freedom of style and fresh gaze shows that Rembrandt was certainly not exhausted at the end of his life. This self-portrait seems to be so real that when I see it I always fear it will start to talk!