JMW Turner and Honore Daumier – Sign Of Their Times 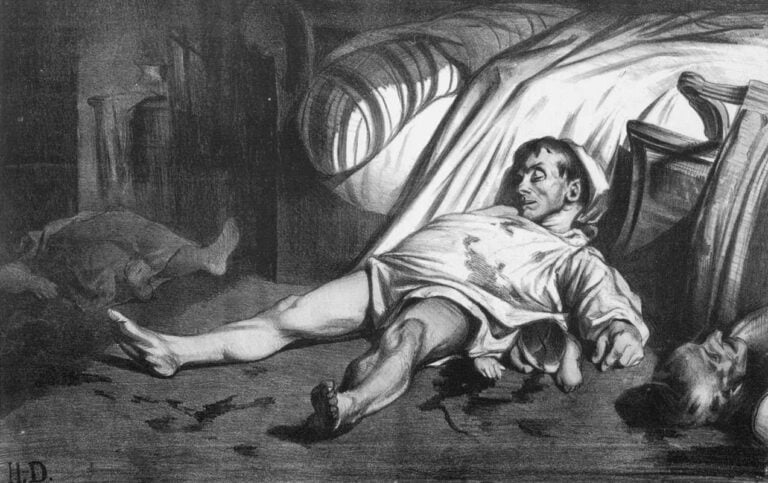 The early part of the 19th Century saw population rises, expansions of cities and the industrialisation of productivity which brought new challenges for artists looking for ways of interpreting these changes.

Two artists, one quintessential British and one French, produced works that resonate with the representations of their times: JMW Turner and Honoré Daumier.

As reflections of the realist need to reveal and educate, two examples of their work in particular, stand out: Turner’s ‘Rain, Steam and Speed-The Great Western Railway’ of 1844 and an 1834 lithograph by Honoré Daumier entitled ‘Rue Transnonain, le Avril 1834’.

Turner, always searching for new ways to depict light and movement, did so in this stunning work.

Here, under a ‘Turneresque’ sky, the brick bridge crossing the River Thames at Maidenhead carries the modern world across its tracks.  Turner juxtaposes this mighty steam engine, with its red fiery heart plunging along the tracks toward us, with the small barge meandering its way to its destination, oh so slowly.  A beautiful touch is the hare desperately racing ahead of the train.

The catalogue for a recent Tate exhibition mentioned that a train on this route was called ‘The Greyhound’ and they speculate that this was the reason for this nod to nature being overpowered by modernity. It could also be argued that Turner, who was 69 years old when he painted this, was declaring an allegiance to the new technology. Certainly, Turner was always interested in scientific discoveries which may explain why his work constantly challenged the academy who were still locked into the past.

Outside of Britain, revolution was rampaging through Europe and while Eugene Delacroix was producing ‘Liberty Leading the People’, representing a real-life event in a metaphorical and romantic way, Honoré Daumier (1808 – 1879), a painter, sculptor, printmaker, and caricaturist was producing commentaries on social and political life in France in the 19th century.
This simple lithograph demonstrates the power realism has in art.

Daumier’s depiction of a moment when French troops shot a family during a riot is a moralistic piece. At first, it may appear that this shows drunkenness or sloth, but what you see as you look closer is the reality of death; the prone figure crushes a small child.  To his right is the body of an elderly relative and in the doorway, another figure, still in a night shirt. This is an intimate, devastating portrayal of a family unprepared for death: they are not fighting, they are slain and this is a powerful anti-state representation.

Daumier himself said, “It is necessary to be of one’s times” and this should be the motto for every realist work that followed in their wake.

The distinctive ritual of Islamic prayer, known as namaz (in Urdu) or salah (in Arabic) has captivated the imagination of many Orientalist painters.

The Industrial Revolution brought fundamental and irreversible social changes. But what was its influence on art and artists? Discover works by...