Painting of the Week: Agnolo Bronzino, An Allegory with Venus and Cupid 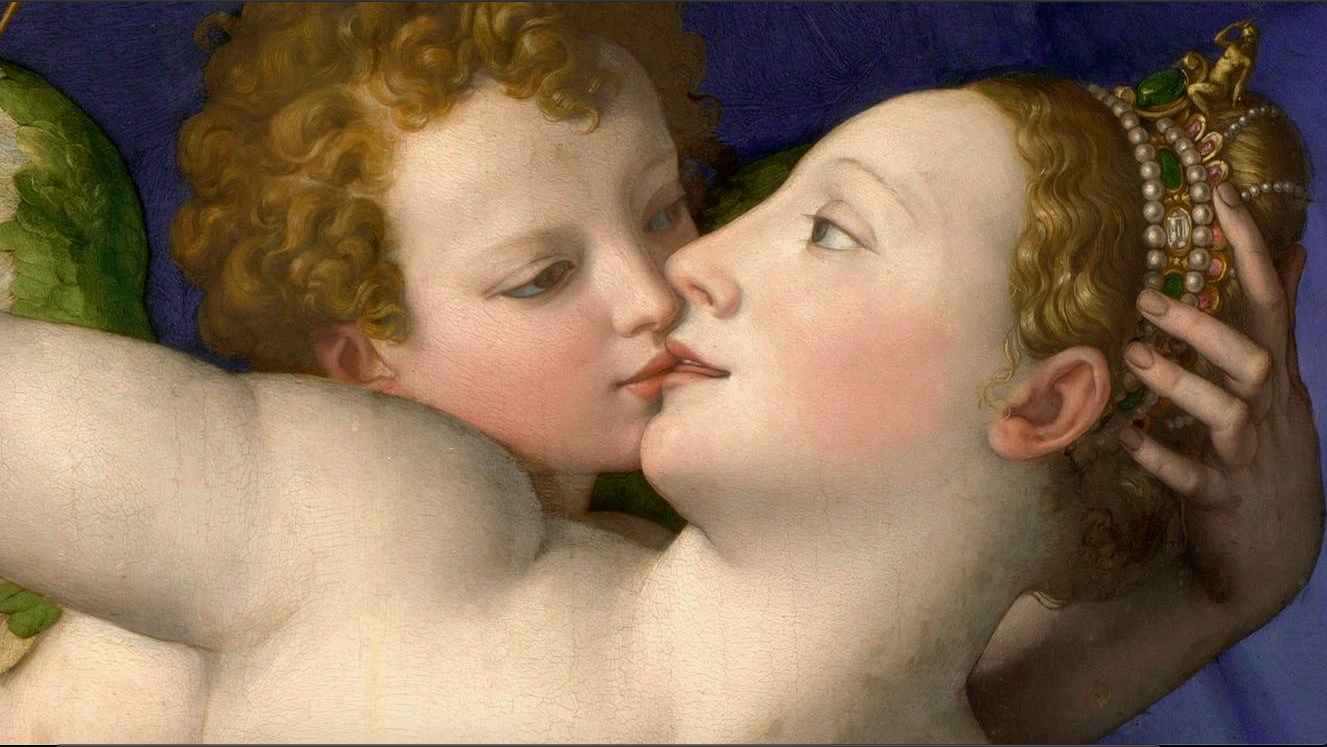 This week’s painting, An allegory with Venus and Cupid by Agnolo Bronzino from the National Gallery in London, is one of the more mysterious masterworks of Mannerism. It also beautifully presents many of Mannerism traits: elongated bodies, elegant poses, composition favoring tension over harmony and balance, vivid colors and intellectual sophistication. It may feel cold at first glance, unnerving at the second, but then you just cannot stop looking at it, discovering new things every time.

Agnolo di Cosimo, known as Bronzino was a Florentine painter. His nickname may refer to his dark skin or reddish hair. Bronzino worked at the court of Cosimo de’ Medici, he painted mainly portraits of the court figures, you can find some of them in the link at the bottom of this article. However, he didn’t shy away from religious subjects and an odd allegory. He was a student of Pontormo but developed his own style. Typically, his paintings are a bit calmer than the dramatic compositions of his teacher, even in this case the composition is complex and full of tension but far from being overly dramatic, the two main figures are more languorous.

The center of the stage is taken by the most beautiful of the goddesses. Venus holds the proof of her status in her left hand, the apple she won in the judgment of Paris. Further causing the Trojan War, but who would care about that in a moment of passion. The slender, boyish body wrapped around Venus is Cupid, her son. Identified by the wings and strategically positioned quiver. He twists and writhes, but his main focus is on giving pleasure to Venus. His hand cupping her breast, fingers caressing the nipple, with the other hand he gently holds her head for the passionate kiss. Venus takes all this with majesty and grace. Her lips parted, tongue showing, but somehow not fully giving into the passion, more to lazy pleasure.

Those are the two figures that can be identified with certainty in the painting. An yet it is this identification that makes us uncomfortable. What otherwise would be run-of-the-mill court erotica, becomes sinister due to their relationship. It may make us uncomfortable, but at the same time, it is difficult to take our eyes off the couple. Their marble-like, cold skin mesmerizing and reminding us we’re dealing with gods here, not mere mortals.

Both their figures adopt the pose typical for Mannerism – figura serpentinata. Spiraling around the central axis, which in this case is also the axis of the painting, Venus’ spine. Her legs frame the bottom of the composition. In the bottom left corner, under Cupid’s foot, you can see a pair of doves, which he seems to be pushing away. Those are a symbol of innocent love, clearly unnecessary here.

Fun fact about the Cupid’s foot, I’m not sure if it looks familiar to you, but if it does it means you have been watching Monty Python’s recently. For this is the famous Monty Python’s foot, it was this painting that inspired Terry Gilliam.

Another figure that can be identified with some certainty is the top right-hand side one. The bald, old man has an hourglass perched on top of his shoulder, indicating this may be Time. He is the only figure in the painting with a more human than godlike skin, possibly indicating the impact of time on all of us, but reinforcing the gods immunity to it.

His hand reaches across the top of the painting framing the top border. It closes the composition together with Venus’ legs at the bottom. It is not clear from his gesture whether he is pulling the blue material in or pushing it away to uncover the scene. What is interesting though is the fact that Time does not seem directly concerned with what takes place below him, he is completely focused on the figure on the far left. Probably the most mysterious figure in the whole painting.

Is it a face or is it a mask? Empty eyes, tragic expression and missing part of the head. Typically this figure is interpreted as Oblivion, due to the missing part of the brain, symbolizing missing faculty of memory. Some scholars have been interpreting it as Night, and then Time by opposition becomes Day (hence maybe the tan).

The mask like face corresponds with the two masks in the bottom right corner. This again is part of how Bronzino plays with us, through composition making us look for the clues and look at the painting again and again. This bring us to our next figure.

Ignore the sweet child in the forefront, we’ll get to him. Look behind him, at the beautiful expressionless face, offering a honeycomb. Could there be something more pleasant than sweetness offered by such beauty? Possibly a lot of things if you consider her hindquarters – snake body with lion’s legs. To top that in her other hand she holds a sting attached to her tail. Reminding us that with every pleasure comes pain, but also that perceptions can be threateningly misleading. Love isn’t always safe (again this feeling of unease at the whole situation).

Moving over to the front figure, typically identified as Folly. This little boy could easily find his place in any other Venus and Cupid painting, throwing his rose petals around the mother and child. Or could he? If you look closer at his foot he steps on rose thorns, one of them actually piercing his foot. Even the thought of the pain makes me shiver, but he makes nothing of it. Is it just Folly, or is it pushing the boundaries of mania? When the brain is so engrossed with excitement that it does not feel pain.

Again, in almost perfect symmetry on the left-hand side we can see the most striking figure. A person screaming and grabbing their head. It is difficult to tell whether it is a man or a woman, but we know for certain they suffer. Typically identified as Jealousy, towards the end of the 20th century another interpretation was proposed. Around 50 years before Bronzino painted his masterpiece syphilis was introduced to Europe, from the New World. It was not treatable, but people clued in early on that it is sexually transmitted (hence the term venereal disease).

Due to this, you could argue that there are two high-level interpretations of this painting, and each of them is a simplification that can be enriched and developed in various directions.

Either it tells about carnal love and the accompanying folly, deceit, and jealousy developing over time, leading to the oblivion. Or you can go with hardcore medical interpretation, we have the cause in the center, and around it, symptoms of syphilis developing over time driving the victim mad before they die.

For me, both of them are too simplistic, especially for the court that so enjoyed a good riddle. They are also too moralistic, let’s be very honest the court of Medicis was not necessarily that concerned with morals. Probably more into repentance than avoiding sin altogether.

This is precisely why this painting is so fascinating, centuries after it is still open for interpretation. It is often perceived as cold, maybe rightly so, for it is a challenge for our aesthetics versus morals and an intellectual game more than a source of emotional experiences.

If you find any joy and inspiration in our stories, PLEASE SUPPORT
DailyArt Magazine with modest donation. We love art history and we want to keep going with writing about it.
$5 $10 $25 $50 $100 MONTHLY
Related Topics:Agnolo Bronzino, An Allegory with Venus and Cupid, Cupid, Deceit, featured, florence, Folly, London, National Gallery, painting of the week, POW, venus