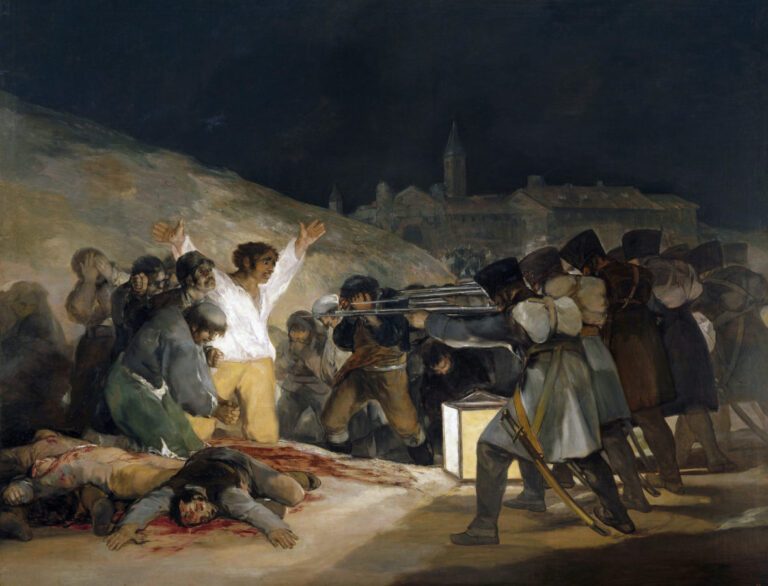 Everyone has heard of the Spaniard, Francisco Goya, but what title would you give this enigma of an artist?

All of these titles are apt, however, would you place him in the category of ‘modernist’?  In Madrid’s Museo del Prado, are fourteen paintings, known collectively as the ‘Black Paintings’. These paintings are like nothing Goya had produced before and, for these to be created towards the end of his life, we cannot fail to be amazed at the the style, the subject matter and the way in which he foretold the art that was to come almost 100 years later.

Goya’s career had spanned over 40 years and he had achieved a great deal in terms of success. From a lowly start as an apprentice to José Luzán y Martínez and then moving to Madrid to continue his studies, he eventually became court painter to Charles IV of Spain in 1789.

Goya continued to work for commission and his output was prolific. He courted controversy with his ‘La Maja Denuda’, the first nude painting that was an image of a real woman and not linked to history or mythology. His outlook changed following a severe illness which coincided with the Peninsular War of 1808-1814.  His works took on a more serious tone, with his now celebrated depiction of two days of fighting in May and his series, ‘The Disasters of War’.

In 1819, Goya, having recovered from a serious illness that had made his deafness more pronounced, purchased a house outside of Madrid named ‘Quinta del Sordo’ (ironically, The House of the Deaf Man).  Faced with bare walls, Goya set about creating a series of murals, oil on plaster, of a nightmarish world, filled with grotesques, mythological horror, devils and violence that could only have come from a mind possessed.

After his death in 1828, the plaster for each painting was carefully removed and attached to canvases that now reside in Museo del Prado.  The subject matter foreshadowed the dreamworld of the surrealists and the loose, painterly style foreshadowed the modernist techniques.

In, possibly his most famous work from this cycle, Goya tells the story of the Titan, known as  Saturn by the Romans, and Kronos by the Greeks, and how his fear of the prophecy that one of his own sons will destroy him, led him to devour each of his children as they were born.  In Goya’s version of the story, Saturn does not swallow a baby whole, as the myth led people to believe, but here is a full grown woman being eaten, blood drips long the maimed torso and we see Saturn with his mouth open, eyes bulging; the whites of his eyes being the most terrifying you will ever see.

In this scene there is much to take in.  The shadowy figure of the devil in the guise of ‘He-Goat’, adds a supernatural feel to the scene and the faces of the congregation, lit by the glow of fire are grotesque and eager to serve their master.  Over on the right hand side is a figure that is out of place and we can assume that she is to be initiated into this coven.  Goya’s loose brush strokes across the plaster evoke a sense of movement;the crowd all moving as one. Goya predates the modernist style in this way and is a contrast to the scenes of young people enjoying pastoral pursuits that he created earlier.

This has several names as it is difficult to discern whether the figures are male or female. The smallest of all the canvases, this has the most to say.  The composition is tight, the brushstrokes are sweeping; light and shadows created with ease.  The crone on the left has the bowl of food, but her/his partner is cadaverous in appearance.  Is this an allegory on greed and poverty? Is it a reflection of a society that was uncaring?  It is it death stalking its next victim?  The most enthralling aspect of all of these painting is that we do not know.  We can place our own interpretation on these and this is far removed from the realism of the the early 19th century and places it firmly in the modernist period. It could be said that this has an appearance of expressionism, with the rough outlines, muted palette and the grotesque nature of the figures.

By far the most enigmatic of all the paintings, it immediately brings to mind JMW Turner’s later works in terms of its colour palette.

There is no landscape here, but we can still place the pleading face of the dog in jeopardy.  The lack of placement gives us the idea that the dog is either caught in water, head just above the water line, or he is struggling to clamber onto the summit.  The pathos on the dog’s face is so clear and there is a thought that originally, Goya painted a figure next to the dog which might explain the direction of the gaze. There is no doubt that this simple scene speaks the most to the viewer.

For an artist to change his style so frequently, it takes a great deal of confidence in being able to sell this to the public. But with these works, it would appear that Goya was free to explore his own thoughts and feelings and to express them in a way that speaks to a modern audience as much as those who visited the house during his lifetime. With his death in 1828, almost one hundred years before the modern period, can we safely categorise him as Goya, the Modernist?