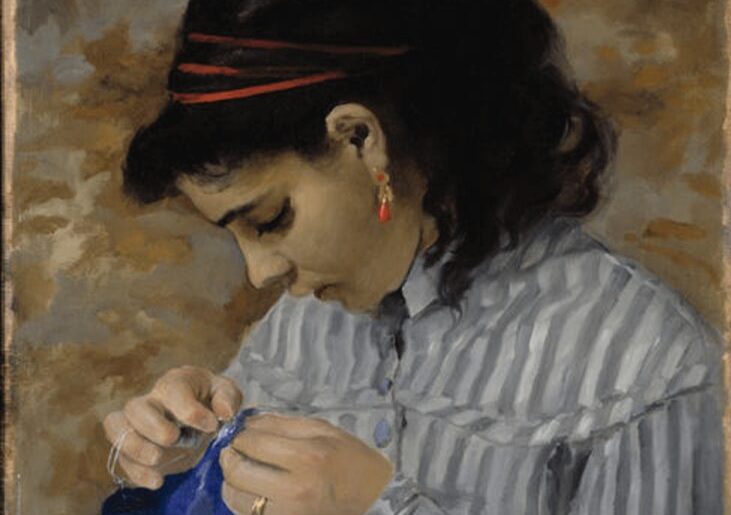 Incidentally, it was Clémence Tréhot, Lise’s older sister and lover of artist Jules Le Coeur, who introduced her to Renoir in 1865. Lise was around 18 years old and Pierre-Auguste 25 when he met his muse and possibly lover. In each of the paintings, Lise is dressed in beautiful costumes and also perhaps enacting different roles for Renoir.

Lise as a Young Fashionable Girl

In Lise in a Straw Hat, Renoir captures the youthful innocence of Tréhot. Her dark eyes and hair resemble the black bow of her dress. In this portrait, Lise is looking away from the spectator. The painting has a limited color palette with blacks, browns, and greens. The blue scarf on the hat is the only contrasting color and Tréhot is dressed fashionably like a Parisian girl of the upper class.

Lise Sewing is an unconventional portrait; there is a lack of pose and a casual intimacy shared between the artist and the model. Tréhot has been caught in a pensive moment, engaged in stitching, unaware of the spectator’s presence. Her head is turned down and she is concentrating on her task. Her dark hair is contrasted against the recurring red ribbon and the red drop earrings.

In Summer, Tréhot is dressed as a young gypsy girl. Her dark hair hangs open on her shoulders, held by a red ribbon. Renoir attempts to depict Lise’s sexual appeal by painting a loose blouse that exposes her shoulder. However, her casual manner of sitting and her listless expression suggest she is still a child, unaware of her feminine charms. Her skirt is meticulously painted in stripes of red, white, and black. The gypsy life was associated with a bohemian lifestyle that was synonymous with freedom from societal norms. In Summer, was painted in a studio and the outdoor background was added later. This painting was Renoir’s first Salon success.

In Woman in a Garden, Tréhot is wearing a blue promenade dress with white details. She has removed one glove and is holding it in her hand. Her hair is tied up and she is wearing the red drop earrings which she also wears in other portraits. The highlight of the painting is the unique hat Lise is wearing decorated with birds’ feathers. Tréhot is either immersed in a conversation or enjoying the outdoor space.

In Lise with a Parasol, Tréhot is depicted as an elegant and fashionable Parisian woman. She is standing in an outdoor setting, dressed in a white mousseline which corresponds to the summer dress code of the day. Her arms are covered and she is holding a black and white parasol. She is wearing a red ribbon in her hair and red drop earrings. As proof of his love, Renoir put his initials on the trunk of the tree behind Tréhot. The painting was received well at the Salon but the critics had compared Renoir’s model to a ‘big soft cheese’.

In Woman with Parrot, Tréhot is holding a parrot, a popular and exotic pet at that time. She is dressed in a black taffeta dress with white cuffs and a red sash that compliments her dark hair and a fair complexion. Tréhot is playing with the parrot that has been let out of its gilded cage. Surrounded by indoor plants and a formal interior that restrict her movement, Tréhot is like a caged bird. Renoir was no feminist but the painting can be seen as a commentary on the restricted role of women in Parisian society. Bourgeois women were mainly confined to domestic spaces. The painting is also a celebration of the color black which Renoir called the “queen of colors”.

Lise as a Sensual Woman

In Odalisque (An Algerian Woman), Tréhot is dressed in a rich and colorful North African costume. Renoir was using studio costumes and props to depict this fantasy image of Lise as a harem girl. She is wearing heavily brocaded gold and black pants with a white diaphanous blouse. This is a traditional pose used in nude erotic imagery. She is portrayed in a ‘tense relaxation’ and her gaze is sensual and inviting. Renoir was only in his late 20s when he painted Odalisque (An Algerian Woman). The painting is all about colors and by now it was clear that capturing the folds and colors of the fabric was extremely important for Renoir.

A Nymph by a Stream is one of Renoir’s first nude paintings. This is a traditional depiction of a nude woman in natural settings: reclining, looking directly at the spectator, and holding blades of grass. Tréhot is portrayed as a water nymph, but the painting is actually a portrait of Lise because the resemblance is quite striking.

Renoir painted Diana, as an academic study of a nude. Tréhot is here portrayed as Diana, the classical goddess of hunting. The painting was created in a studio with the props like bow and arrows and the deer was added later. Diana is looking down at the hunted deer. The only resemblance to Tréhot is her dark hair and flawless skin tone. The painting was, however, rejected by the Salon jury because it was too realistically depicted.

In Bather and the Griffon Dog – Lise on the Banks of the Seine, Tréhot is portrayed like Botticelli’s Venus from Birth of Venus (1485–1486). This is a classical pose for a female nude and Renoir was possibly imitating the Old Master. Tréhot is looking sideways, holding her lovely dress. She is in a public place, therefore, covering herself modestly. Apart from Tréhot, there is a pet dog and a reclining female figure in the background. It remains unclear who the second figure in the painting is.

In Half-naked Woman Lying: The Rose, Tréhot is portrayed as a sensuous woman, exposing herself to the spectators. She is looking sideways, with one hand above her head and in the other, holding a rose. The quick and thick brushstrokes suggest Renoir’s evolving impressionistic style, for which he later became known.

Lise as a Bourgeois Parisian Woman

For a long time, A Couple was seen as a painting depicting the loving relationship between Alfred Sisley, an artist, and his wife Marie Lescouezec. However, research has proven no likeness of the model to Marie. It is suggested that the woman is Tréhot, and what Renoir wished to depict here was the affectionate relationship between two people. The background is deliberately blurred to avoid any distractions. The focus of the painting remains the ‘couple’ and the woman’s beautiful dress of the latest fashion!

It is not clear what title Renoir gave to this painting but it is popularly known as La Promenade. During this phase, Renoir’s palette was moving towards more light and luminous brushwork, thanks to the influence of Claude Monet. The woman in La Promenade is Tréhot, posing as a bourgeois Parisian woman with her partner, strolling in a local park in Paris. The use of dappled light filtering through foliage marked Renoir’s career as the finest impressionist painter.

Lise in a White Shawl is possibly one of the last paintings of Tréhot by Renoir. It is also the most portrait-like depiction of Lise. She is wearing large gold earrings, probably the same we see in Odalisque, a white lace shawl, a black silk dress with white cuffs, and a red scarf. Her dress compliments her dark features. She still appears quite child-like except now, unlike other paintings, she is looking directly at the painter and the spectator. By now, Tréhot had, had a long collaboration with Renoir and had dressed and posed for him many times.

In 1883, for reasons unknown, Lise and Pierre-Auguste ended their companionship. Lise married Georges Brière de l’Isle, an architect and had four children. There was a rumor that Tréhot and Renoir had a daughter named Jeanne who was financially supported by the artist.

Renoir’s muse eventually became a respectable bourgeois Parisian wife in real life – a role she had played many times for the artist’s paintings.