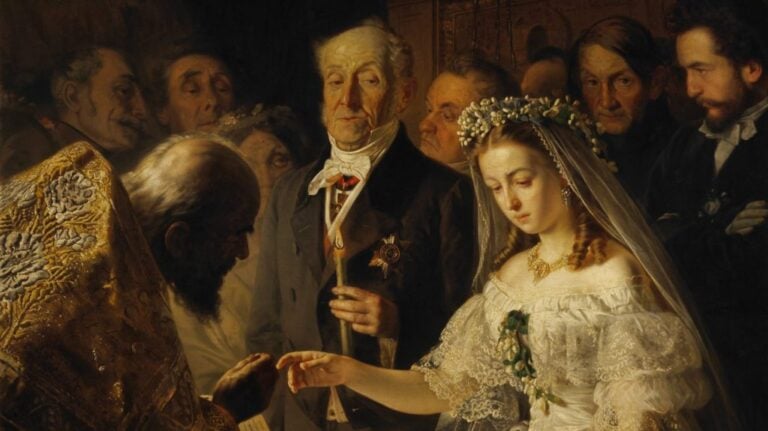 Vasili Pukirev’s painting Unequal Marriage has a legend about it: allegedly, after looking at it, all the elderly grooms refused to marry their young brides. Unequal Marriage openly condemned the commercialism of Russian society. In reality, there was no magic. Just the young bride’s face, touching to the core.

Vasili Pukirev was born in 1832 in a poor peasant family. It was only thanks to a happy coincidence that he was enrolled in the Moscow School of Painting, Sculpture and Architecture. In 1858, Pukirev graduated with the title of a “free artist”. Two years later, the Imperial Academy of Painting awarded Pukirev with the title of academician of historical and portrait painting. After receiving the title, Pukirev also received a state-owned apartment and the position of a teacher.

In 1862, the 30 year old Pukirev presented the painting Unequal Marriage at the annual academic exhibition. This was a great sensation. The artist was then awarded the title of professor.

The further fate of Purkirev is much sadder: none of his later paintings gained as much success as Unequal Marriage. Many assess him as “the artist of one painting”. Nevertheless, he tried to develop as a creator in different directions: he taught, painted Moscow, provincial temples and churches, and icons.

The Story Behind Unequal Marriage

Unequal Marriage became unprecedented for its time; society was excited by a new and relevant topic – the power of money.

According to the most popular version, this scene is deeply personal for Pukirev; this is his beloved marrying the rich prince. Most likely, she was a poor woman without a dowry and her parents considered marriage with a wealthy, prosperous prince to be the best option for her. But what about Pukirev? He just graduated, his career as a painter did not bring the necessary income to support her. Beauty, after all, was a very popular product.

Vasili Pukirev painted this picture in a difficult state of mind. Look at the man on the right: he undoubtedly resembles the artist himself. Furthermore, his pose expresses obvious dissatisfaction with what is happening.

The groom seems entirely composed of angles and straight lines, unlike the soft, angelic bride. He symbolizes fading, mortification, the atmosphere in which the maiden beauty of the bride is to fade. He is wearing an expensive suit and has an unnatural posture, which is supported by a tight corset. His head barely turns, squeezed by a high collar, his dull eyes haughtily look at those around him.

We can see the he has the Order of Saint Vladimir for continuous civil and military service, so of course he is a deeply respected man. However, these awards are clearly inappropriate for a church wedding. The groom tries to look at the bride from the height of his general’s rank. Where does such soullessness come from? One can only guess.

The bride is the only figure in the image painted in light colors. She is still a child, barely holding back tears. This day seems to be the most bitter of her life. Her delicate face, framed by blond curls, is sad. A candle in her child’s hand leans over, wax drips onto her wedding dress. Her right hand is extended to the priest who is about to put a wedding ring on her thin finger. She is already indifferent to her own fate.

According to research, the bride is Praskovya Matveevna Varentsova. She was the illegitimate child of one of the wealthy people of that time, who took an active part in her upbringing and establishing her future life. Perhaps this is the reason for her marriage to a person that is older, but also richer. Praskovya became an early widow but not a rich heiress. She lived out the rest of her days in a Moscow poorhouse – a charitable institution for people who were not able to take care of themselves.

In 2002, the Tretyakov Gallery acquired a pencil drawing made by artist Vladimir Sukhov in 1907. It is the most definitive proof. The signature says: “Praskovya Matveevna Varentsova, from whom the artist Pukirev did his famous painting Unequal Marriage 44 years ago. Mrs. Varentsova lives in Moscow, in the Mazurinskaya poorhouse.”

There are two very strange figures in this room, two old women. Well, nothing out of the ordinary – old women came to see the wedding. Maybe they are the groom’s sisters. But it begs the question: why are they wearing the same wreaths as the bride’s? One even has a white dress!

Let’s look more closely: it appears more like a sheet. Perhaps this sheet is rather a burial shroud. The figure of the second bride behind the priest looks even stranger because ordinary guests are not allowed to stand next to the priest.

Unless, of course, they came from another world.

There are several theories as to who these women are. Most likely, they are are the ex-wives of the groom himself. It is not clear whether they died a natural death or whether he wore them out in order to remarry a young girl. So, it turns out that there are three brides at the wedding all at once. Two of them are dead and looking at the old groom. This detail makes us worry about the bride even more.

Till Blue in the Face

English painter Edmund Blair Leighton was so impressed by the provocative Unequal Marriage that he decided to paint his own version of the topical plot in which a young, sad bride is doomed to marry a rich, old man of convenience. Also he gave it a poignant title: Till Death Do Us Part.