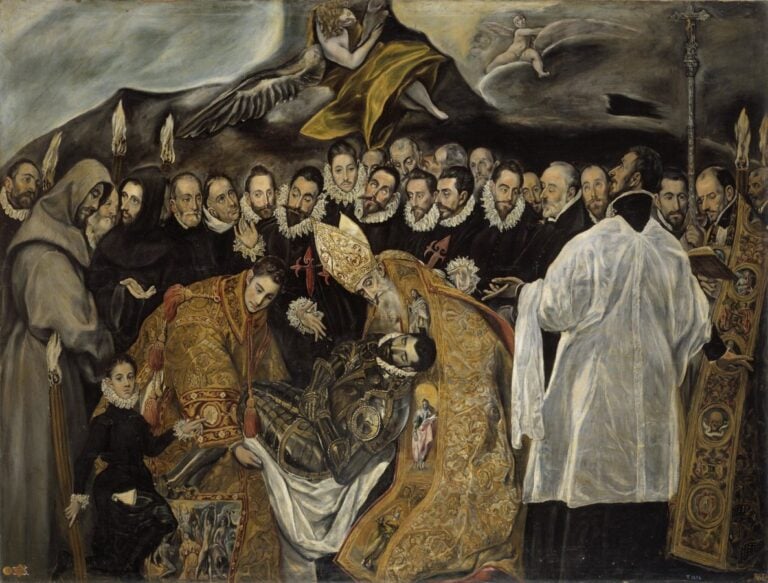 Funeral practices are deeply ingrained in all cultures. Varied traditions around the globe reflect widespread beliefs and values. On this day when we remember the deceased ones, let’s take a look at funeral paintings in Western art–some of them depict the funerals of famous people, and some of them, on the contrary, of ordinary men.

1. Gustave Courbet, A Burial at Ornans

At the end of the summer of 1849, Gustave Courbet started working on his first monumental painting. He was a relatively unknown artist back then, but he found his path to fame by shocking contemporary art critics. The artist used a canvas of huge dimensions, usually reserved for a “noble” genre of history painting, to present an ordinary subject, with no idealization. What was even more shocking about A Burial At Ornans was the fact that it is a frozen-like portrayal of somber middle-class citizens at a graveside in Courbet’s home province. There is no heroism at all! At the Salon of 1850-1851, people were outraged, decrying “the ugliness” of the characters and the ordinariness of the whole scene. Courbet’s use of the common people as a grand subject was deemed a radical act, “the engine of revolution,” as one critic said.

Anna Ancher is regarded as the most important Impressionistic painter in the Danish art scene. Whereas the French Impressionists were intimately linked to modern life, Anna Ancher painted her paintings on the outskirts of modernity. As in many of Anna’s works, there is no real action; the play of the light in the room is the real protagonist of the picture. Here her characters are so preoccupied with their doings that they do not notice the viewer’s presence, and the light on the wall is the only trace of the world outside. By showing a tiny room, Ancher had an opportunity to demonstrate her mastery of color by mixing together the blue, pink, and green hues.

3. El Greco, The Burial of the Count of Orgaz

“My sublime work,” is how El Greco himself described this painting in a court proceeding.

A long inscription below the image (not seen on this reproduction, unfortunately) tells us the story of the count of Orgaz: in 1323, during the funeral of the pious Lord of Orgaz Don Gonzales Ruiz at this Church of Santo Tome, St. Stephen and St. Augustine honored the dead by descending from open heaven to lift the body and put it in its sepulcher. That must have been a funny thing to see.

El Greco was asked to paint this miracle, and he painted it as if he had seen it as a witness. A little boy (El Greco’s son, perhaps) introduces himself and us to the event.

This sad picture tells a lot about the life of peasants in 19th-century Poland. Tired and overworked peasants are constantly struggling for a better fate. The death of a child is probably the worst thing that can happen to parents and here we can see them grieving while waiting for the funeral. Paradoxically, the death of a loved one gave them a moment of rest, as they had to leave their everyday work. Gierymski was one of the greatest representatives of Polish Realism, and a precursor of luministic and colorful experiments in Polish painting of the late 19th century.

Percy Bysshe Shelley, the famous Romantic poet, drowned in 1822 when his yacht was wrecked by a storm in the Gulf of Spezzia, Italy. His body was cremated and his remains were later buried at the Protestant cemetery in Rome. Fournier’s painting shows the funeral pyre surrounded by three of the dead poet’s closest friends, from left the author and adventurer, Trelawney, Leigh Hunt, and Shelley’s fellow poet, Lord Byron. Trelawney described the event in “Recollections of the Last Days of Shelley and Byron.”

It was a hot August day, but Fournier chose to ignore this aspect of the description, depicting the weather conditions as grey and cold in order to accentuate the somber and dramatic mood of the painting. Shelley looks like an ancient hero, a Greek warrior who died in glorious circumstances (certainly not drowned during a storm).

6. Anne-Louis Girodet-Trioson, The Funeral of Atala

Presented at the Salon of 1808, the painting is evidence of the renewal of religion in France. The novel Atala or the love of two savages in the wilderness written by Chateaubriand was set in America in the 17th century. Atala is a tragic story of a young Christian girl who falls madly in love with Chactas, an Indigenous man whom she has saved from a death sentence. Trapped by the vow made to her mother to dedicate herself to religion, Atala chooses suicide in order to avoid succumbing to her passion, despite Chactas’ willingness to convert in order to marry her.

This view shows a meager funeral cortège at the foot of the Butte Mouffetard, a hill in southwest Paris. In the background, we see the silhouettes of the towers and cupolas of the Val de Grâce, the Panthéon, Saint-Etienne-du-Mont, and the Tour de Clovis. This unfinished painting probably presents the funeral of the writer Charles Baudelaire, which took place on September 2, 1867. The artist, unlike other friends who had yet to return from vacation or were too far away from the ceremony’s place, owing to the threatening summer storm, was among the few mourners present.

Manet kept the picture until his death. In 1894, Pissarro acquired it in exchange for one of his own landscapes.

Edward Okuń, today a bit forgotten by the general public, during his lifetime was considered one of the greatest individualists among Polish artists active at the turn of the 19th and 20th centuries. He was inspired by Italian Renaissance art, the English Pre-Raphaelite brotherhood, and the Secession. In this extremely symbolic composition, we see a violin, the only material trace of the presence of a dead violinist who played it. The funeral procession consists of four female figures in black veils: the personification of the strings on which he played.

The subject of this Futuristic work is the funeral of Italian anarchist Angelo Galli, killed by police during a general strike in 1904. The Italian State feared that the funeral would become a political demonstration and refused the mourning anarchists entrance to the cemetery. When anarchists resisted, the police responded with force and a violent scuffle ensued. Carlo Carrà was present there. He reflects in a later memoir:

I saw before me the bier, covered with red carnations, wavering dangerously on the shoulders of the pallbearers. I saw the horses becoming restive, and clubs and lances clashing, so that it seemed to me that at any moment the corpse would fall to the ground and be trampled by the horses…

In this painting, we see a funeral procession in a modern urban city, populated by twisted and grotesque attendants. It is dedicated to the German psychiatrist and avant-garde writer, Oskar Panizza, noted for his play Liebeskonzil, which draws on the first historically documented outbreak of syphilis. Although Panizza’s works, in which he rejected all militarism and religious authority, were deemed blasphemous by both the Church and the government of Emperor Wilhelm II, they were later admired by George Grosz and other intellectuals of his generation.

Grosz himself said about this work:

In a strange street by night, a hellish procession of dehumanized figures mills, their faces reflecting alcohol, syphilis, plague… I painted this protest against a humanity that had gone insane.

11. Francisco Goya, The Funeral of the Sardine

This painting represents a mask festival called the “Burial of the Sardine,” a popular Spanish festivity marking the end of Carnival and the beginning of Lent, which still takes place in some parts of the country. Masked and disguised, the revelers are seen dancing their way to the banks of the Manzanares, where a ceremonial sardine will be buried. Goya does not illustrate the fish in the painting, nor the large effigy made of straw called pelele from which the fish hangs down; in the center, we rather see the disturbingly grinning face of the “King of the Carnival”.