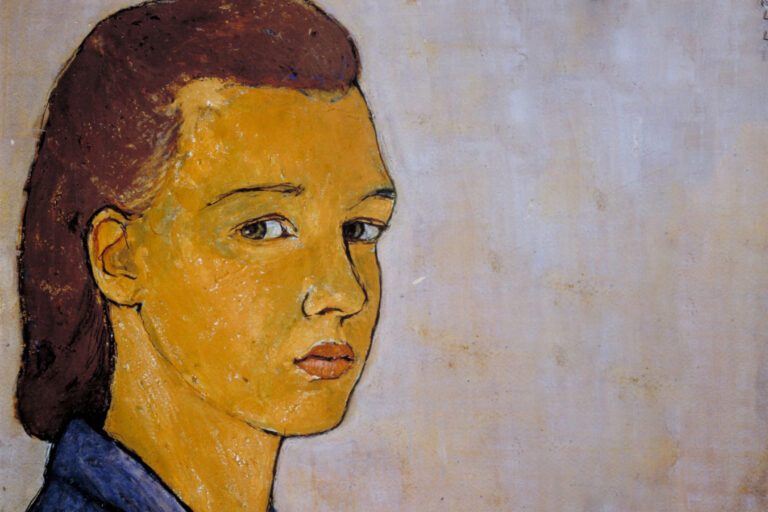 This is not a story with a happy ending. Or a happy beginning for that matter. It’s a story of suicides, sexual abuse, a mystery to solve and art as means to deal with trauma. Read about the sad story played in the theater of life and death of the talented Charlotte Salomon. Ready?

My name is Charlotte

Charlotte was born in 1917 to a well-off Jewish family in Berlin. Her childhood was happy, she had all she needed. But one day her mum didn’t smile back – she fell ill. Was she suffering from depression? Probably. The thing we do know is that one day Charlotte’s mum jumped out of a window. And little Charlotte saw her body on the street.

My mother killed herself

Charlotte wanted to understand what was happening to the women in her family. Was it a mental disorder? She didn’t want to follow in their footsteps in any way. She began to compile a complex artwork, a sort of a play or a fairy-tale, in which fictional characters (based on real-life people) experienced events resembling the ones from her own life. She called it Life? Or Theater? I believe that using her art, Charlotte tried to come to terms with all the trauma she experienced, as well as using it as a tool to solve the mystery of her family.

And one day she did. As WW2 began, Charlotte’s family had to hide. However, one day she and her grandfather were interred for several weeks in the Vichy-run concentration camp of Gurs, in southwestern France. When they were released, they moved in together in Nice. In her notes she wrote about her grandfather’s requests to share “a bed with me,” and his reasoning: “I’m in favor of what’s natural.” Charlotte finally got the answer: her grandfather was the source of the whole misery. She decided to stop it: one day she served him an omelet containing poison. Charlotte killed him.

When she decided to marry a man whom she didn’t love, she made one mistake: the marriage documents became the evidence of her existence as a Jew. One day the Gestapo knocked on her door and took her away, straight to Auschwitz. Since she was pregnant, she did not have any chance of survival. She was gassed in a gas chamber at the age of 26, in 1943. Yet, her work has survived.

The Jewish Historical Museum in Amsterdam marks the 100th anniversary of the birth of Charlotte Salomon (1917-1943) with a special exhibition dedicated to her artistic legacy: the artwork Life? Or Theatre? (on display until 25 March 2018).