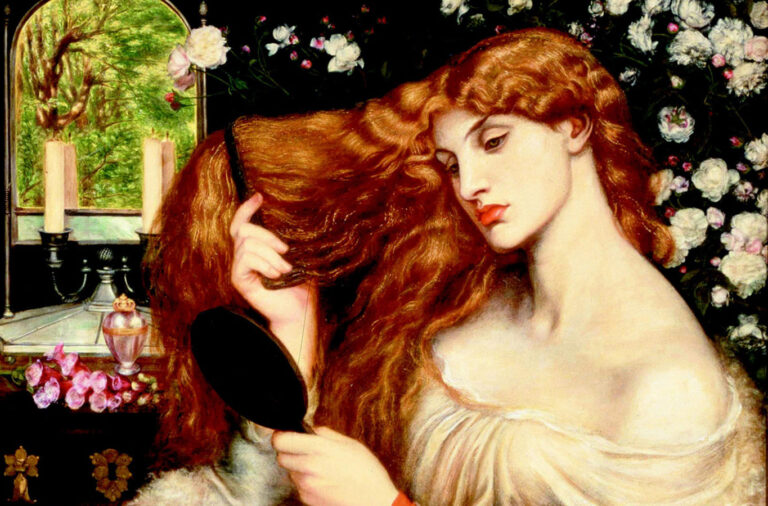 Britain is an obvious pilgrimage site for all Pre-Raphaelite fans, but did you know that the United States also has something great to offer? It's the Delaware Art Museum!

The Delaware Art Museum in the city of Wilmington boasts the largest and most significant collection of Pre-Raphaelite art in the United States. It is also one of the finest and largest Pre-Raphaelite art collections outside of Britain. The museum's collection consists of more than 150 works, which include paintings, drawings, photographs, decorative arts, and illustrated books.

Julia Margaret Cameron was a wife and mother who took up photography at 49 years old thanks to the influence of the Pre-Raphaelites. She was urged by her friend—the poet Alfred Tennyson—to take photos that would illustrate his poems. Here we see the moment in Tennyson’s Idylls of the King when Lancelot presents a diamond necklace to Queen Guinevere, which he won in a tournament.

Marie Spartali Stillman was a British Pre-Raphaelite painter of Greek descent. She was also arguably the greatest female artist of the movement. The subject of this painting does not seem to be based on any specific text. Stillman worked in mixed media: gouache (watercolor mixed with opaque pigment), gum Arabic (a binding agent), pastel, and chalk.

Although he was not an original member of the Pre-Raphaelite Brotherhood, the painter Frederick Sandys shared the group’s predilection for red-haired women. The model for May Margaret could be Sandys’ common-law wife Mary or her sister Millie.

The Council Chamber represents the second scene in the Briar Rose series, which was a project that Burne-Jones worked on for more than 30 years. The series was based on the story of Sleeping Beauty, retold in the Victorian period by Alfred Tennyson (1809-1892) in his poem The Day-Dream.

The Prioress’ Tale recounts the gruesome murder of a young boy whose throat was slit while singing the Virgin Mary’s praises. The boy's voice miraculously came back when the Virgin placed a grain of corn on his tongue.

There are lines accompanying this painting that are written on its frame:

“Suddenly leaning forward, the Lady Veronica rapidly wrote the first notes on the virgin page. Then she took the bow of the violin to make her dream reality; but before commencing to play the instrument hanging from her hand, she remained quiet a few moments, listening to the inspiring bird, while her left hand strayed over the strings searching for the supreme melody, still elusive. It was the marriage of the voices of nature and the soul—the dawn of a mystic creation.”

Rossetti wrote the sonnet entitled La Bella Mano a year after he completed this painting. This suggests that its visual representation might have been the inspiration for his poem. The painting represents Venus, who is a personification of love, with earthly and divine attributes.

Lilith is described in Judaic literature as the first wife of Adam, and she is also associated with the seduction of men and the murder of children. The depiction of women as powerful and evil temptresses was prevalent in 19th-century painting, especially among the Pre-Raphaelites.