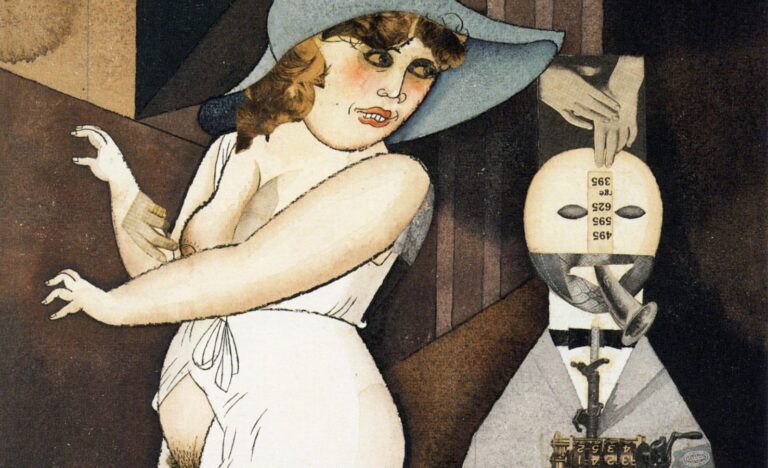 On 11th November we celebrate Remembrance Day commemorating the end of World War One. Three years ago an art exhibition Tate Britain’s Aftermath: Art in the Wake of World War One happened. As you looked around, you could see astonishing works, such as Epstein’s Rock Drill, Nevinson’s Paths of Glory, but without the ‘censored’ label he placed on it, the haunting Zonnebeke, with the symbolic lone helmet lying in the mud, and the poignant devastation of the landscape in Paul Nash’s Wire.

As you stepped closer, however, the real genius of this exhibition was quite clear. There are two sides to any story, and we were privileged to see the German view alongside the British and French.

World War One: Battlefields and Ruins

In the center of the room was one of the most astonishing war sculptures: Wilhelm Lehmbruck’s The Fallen Man.

Lehmbruck’s soldier crawls along the ground, naked, dejected, his head so low it rests heavily on the ground. This is the consequence of war, not glorious, not remote, but something you cannot escape from. It was designed by Lehmbruck for the war cemetery in his hometown of Duisburg. As a paramedic in a Berlin hospital, he was affected by the experience and never recovered from it. His later works reflected the misery and suffering but it was not a cathartic experience for him and he finally took his own life in 1919.

However, when it came to British memorials, the idea of a realistic depiction was not in the spirit required and, in room 2 we saw the contrast of Charles Sargeant Jagger’s large relief, No Man’s Land, alongside his marquette for Driver, which can be seen on the Royal Artillery Memorial in London’s Hyde Park. Showing soldiers in realistic positions of agony, pain, and anguish was no way to memorialize heroes, and, as Catherine Moriarty says in her essay, ‘Making the absent present’, it was necessary to put him securely on his feet, helmet on head (or in hand), resolute in stance.

The poignancy of the human cost of World War One could be seen in works such as Felix Vallotton’s Military Cemetery at Chalons-sur-Marne, June 1917.

The tightly packed crosses in beautiful symmetry fade into the distance, each one representing a life lost. In a nearby display case, memorials made out of relics from the battlefield are a stark reminder of the personal tragedy. A bullet with a framed photograph of a young German soldier welded to the base, a French grave marker that a family member placed on a cross tell their own story of loss and the desire to remember. These images contrast with the paintings of the battlefield graveyards by William Orpen and Paul Segeith. While Segeith employs the muddy palette reminiscent of the reality of the battle-scarred landscape, Orpen bleaches his scene out in the bright sun, with colors so garish that they make you want to look away.

Above your head in this room is Ernest Barlach’s The Floating One, or Der Schwebende a bronze horizontal statue, that was brought to the Tate from Güstrow Dom in Germany. An interesting podcast from the BBC regarding this piece can be found here.

Barlach decided to consider the impact of grief on those left behind, and this image of a mother (with the facial features of the sculptor, Käthe Kollwitz) floating above the battlefield, arms crossed across her broken heart is a stunning memorial. However, by the 1930s, this was one of the many destroyed by the Nazis under the label of ‘Degenerate Art’. Fortunately, Barlach kept the mold and the figure was recast and restored to its rightful place after World War One.

The tone of the exhibition changed from this point and rather than concentrate on depicting war and memorializing the dead, we were confronted with the aftermath of the war in all its reality and horror; those who returned wounded and scarred – both physically and mentally – from their experiences. Artists were now portraying the reality of war on canvas, which was different from their predecessors who concentrated on the glory of war and the notion that there was dignity and honor in dying for one’s country. But as Owen explained in his poem ‘Dulce et Decorum Est’, this lie could no longer be commemorated in artistic form. From Henry Tonks’ medical pastels of the disfiguring facial wounds to Orpen’s traumatized figure in Blown Up, it is not possible to be sheltered from the reminders of what war really meant to those who took part.

This is where the German artists, Otto Dix, Conrad Felixmüller, George Grosz, and Heinrich Hoerle amongst others, come into their own. For these pieces, the artists did not disguise with metaphor and symbolism, in fact, at times you feel you have to look away. Veterans blinded, with amputated limbs and those driven mad by their experience are put in front of us as a reminder of what we owed, and what was not given in return.

The criticisms of those in charge are the prime aim of these works and are brought together so well in George Grosz’s Grey Day with his view of the architect allegedly rebuilding the country, but sealing off the wounded veteran behind the wall while the able-bodied worker merrily goes on his way, and all the while, the corrupt businessman peers around the wall to see what he has created.

The second half of the exhibition moved us into the post-war era through Dada and Surrealism, through to what is suitably entitled, ‘Return to order’ and the people and technologies that took us forward.

The Dada section linked with the way in which the artists challenged the way the conflict had changed society. The George Grosz surrealist painting with the tongue-twisting title, Daum marries her pedantic automaton ‘George’ in 1920. John Heartfield is very glad of it, is a suitable companion to the British artist, Edward Burra’s, The Eruption of Vesuvius, with its mix of humanity and machinery, evoking thoughts of artificial limbs, shell-shock, and the fragility of the human spirit.

The exhibition ended with a series of paintings that bring us into the modern age, with technology being at the forefront. Oscar Nerlinger’s wonderful Radio Tower and Elevated Railway and CRW Nevinson’s The Soul of the Soulless City, laying out how a new world was forming from the chaos of war.

However, it is Oskar Schlemmer’s Abstract Figure that left the visitor with the chill that perhaps we were heading towards a cold and soulless future where human life was to be held so cheap and the lessons of war had not been learned.