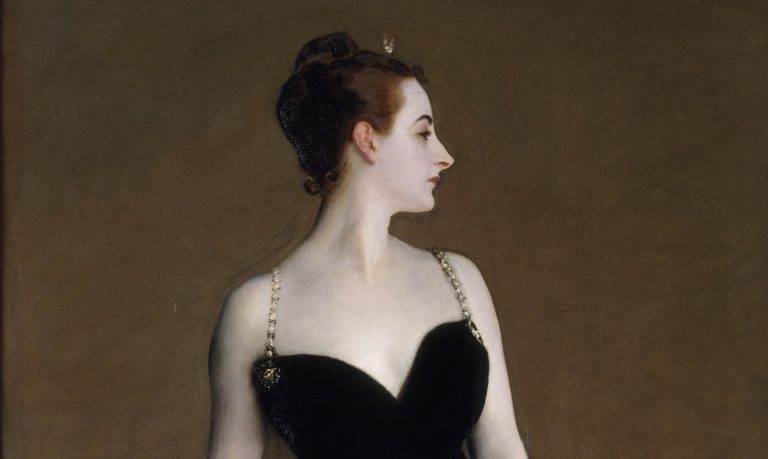 Art and fashion are often intertwined, and isn’t fashion a form of art after all? Not only can visual arts represent the fashion icons that marked history but they can also create these emblematic figures. From monarchs to glamorous personas and modern celebrities, art history is filled with iconic fashion moments.

King Louis XIV was a trendsetter. Using fashion as a medium of authority, he exploited the power clothing can hold to the fullest. The “Sun King” carried out a fashion reform against the rigid Spanish style by introducing colorful and ornamental clothes to France. He even used sumptuary laws to regulate the French aristocracy. At a certain point, for example, only members of the king’s court were allowed to wear high heels – and the higher the heel, the higher the rank.

In the renowned portrait by Hyacinthe Rigaud (1659-1743), the king wears some emblematic pieces of his time: a coronation robe, cravat, red heels, and wig. The fleur-de-lis could not be missing (as a symbol of the French monarchy). This is an image of power, majesty, and divine authority. Furthermore, the red-heeled shoes were the king’s signature look and the legacy of this image lives today in the iconic shoes by Christian Louboutin.

Tamara de Lempicka’s (1898-1980) art has been described as timeless glamour. She socialized with the high society of her time and also captured them in her paintings. Lempicka’s Art Deco portraits are cool and chic, exuding glamour and elegant sensuality. Besides painting the rich and famous, she also used herself as a model at times. Her self-portrait in a green Bugatti might be the best-known image of her.

The artist moved between Paris and Monte Carlo, threw fabulous and lavish parties, and crafted the public image of an exotic, immigrant aristocrat. Her paintings, which have a very specific aesthetic and style, appeared often in fashion magazines such as Harper’s Bazaar.

Best known as Madame X, this painting by Sir John Singer Sargent (1856-1925) depicts Virginie Gautreau, a known figure in late 19th century Paris – “the noted beauty of the day”, wrote Edward Simmons. Born in Louisiana, she moved to Paris to marry banker Pierre Gautreau. At first, the painting showed the right strap of her black gown slipping down her shoulder. When exhibited at the Salon of 1884, the public was outraged!

It was deemed so scandalous and immoral that Sargent ended up repainting the strap in its “proper” place. The black dress accentuates her waist, and the plunging neckline shows a lot of skin; it is both fashionable and seductive. Even though the painter did not reveal the sitter’s name, she was easily recognized by the public.

Even though Andy Warhol’s (1928-1987) Marilyn Monroe doesn’t depict any of her famous, fashionable looks, this iconic work could not be left out of this list. In this print by the American artist, we can still recognize the classic eyeliner, platinum blond sculpted hair, and defined lips that set a standard for the Hollywood sex symbol.

A fashion and beauty icon, Marilyn Monroe is behind some of the most fashionable and timeless looks of Old Hollywood. To name a few: the white dress from the movie The Seven Year Itch, the rhinestone-covered dress worn for John F. Kennedy’s birthday, and the pink dress she sang Diamonds Are a Girl’s Best Friend in.

The French court was not the only one to use fashion as a means to convey a monarch’s image — actually most leaders did it. Clothing has been used to transmit specific messages for a very long time, and another such example is Queen Elizabeth I. Her clothing was essential to manifest her power, wealth, and authority (especially because of her gender, her rule was constantly questioned).

The queen’s garments were supposed to influence other monarchs, ambassadors, and of course, her subjects. She also demanded that those around her be well-dressed, but never exceeding their rank, since clothing expressed social hierarchy. The Queen wore elaborate gowns (she owned more than 2000!), rich fabrics, and lavish jewels that highlighted her role as head of state.

British supermodel Kate Moss rose to fame in the early 2000s and is considered, to this day, a fashion and cultural icon. Even though artist Lucian Freud (1922-2011) was reluctant to paint celebrities, Moss was an exception; being painted by him was one of her life goals, which was fulfilled in 2002.

Pregnant with her daughter, Moss sat for Freud for a nude portrait that took nine months to be completed. The painting was later sold for almost five million dollars. However, neither model nor painter loved the final result very much, it was more about the process, apparently, since Moss has said that “sitting for Lucian was an honor and incredible experience.”

Frida Kahlo (1907-1954) is known for many things — her complex and heavily symbolic paintings, her marriage to painter Diego Rivera, and the autobiographical elements included in her art. She is also known for her distinctive personal style, so let’s call her a fashion icon here as well.

Both Kahlo’s art and her life were influenced by Mexicanidad, a nationalistic fervor. She often wore clothing that is distinctive of southwest Mexico. In this portrait, even though her attire is more subtle than in other paintings, it is still colorful and vivid. Her hair is in a Tehuana traditional braid with a red ribbon and one pink flower, and the distinctive eyebrow is present as well.