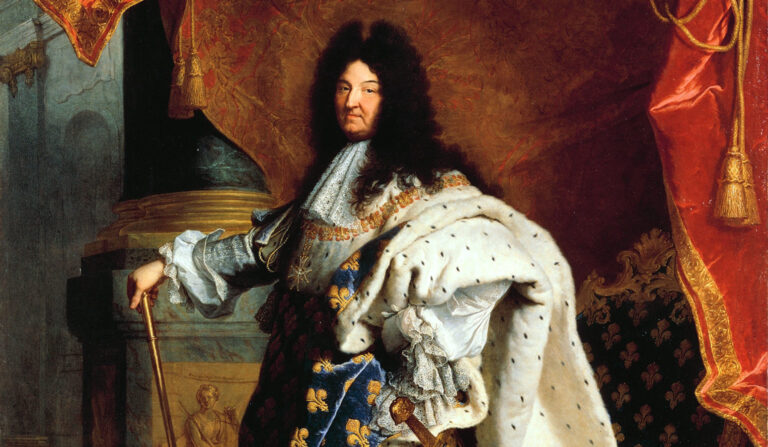 September is a month of Louis XIV: he was born on the 5th and died on the 1st September. He was definitely a great arts patron but sadly a ‘slightly’ less great king. However, that didn’t stop him to be self-indulging, narcissistic and megalomaniac, what we can see in his portraits:

Strong and shiny (most probably) hair

He saw himself as the direct representative of God who gave him a divine right to rule. He wielded the absolute power and handed it to monarchy which would endure until the French Revolution in 1789. He chose the sun as his emblem and cultivated the image of an omniscient and infallible “Roi-Soleil”- “Sun King” (that’s why we can see multiple representations of him as Apollo, who was the god of sun). His most memorable phrase is  “L’État, c’est moi” which means “I am the State”.

Even more hair looking like from a shampoo ad

He has left behind some truly impressive architectural achievements, such as the Les Invalides building complex, the Place Vendôme, and the elegant Champs-Elysées boulevard. We cannot forget his biggest enterprise, the renovation of Palace of Versailles, the manifestation of unlimited power and his incredible wealth.

Louis loved to dance. He would organize shows in one of his favourite rooms in Versailles, the Hall of Mirrors. One could see castle concerts, theater performances, and especially Louis’ beloved dancing quadrilles. His Majesty himself would dress up in various costumes and even perform in these dances!
He appointed Italian ballet master and composer Jean-Baptiste Lully as “music master of the royal family,” while Molière wrote plays for him.

As you can imagine, Louis was quite popular with women… When he was 22-year-old, he married for the first time, his first cousin Marie-Thérèse (1638-1683), daughter of King Philip IV of Spain. They had  six children, of whom only one, Louis (1661-1711), survived to adulthood. Then, Louis secretly married Francoise, the widow of a poet called Paul Scarron.
His first serious mistress was Marie Mancini between 1657 to 1660, then from 1661 to 1667 his mistress was Louise de la Valliere with whom he had four children. Later it was Athenais de Montespan with whom he had seven children. Quite a big family, as you can see from the portrait.

Louis in The Sky with Diamonds

Louis XIV used arts patronage to exert his control over the intellectuals as well as build his image of an ideal king. For a taste of what it felt to be an intellectual/artist at his court, you can read this short excerpt from André Félibien’s letter to the King (Félibien was the chronicler of the arts and official court historian to Louis XIV):

‘Heaven, which has shed on Your Majesty so many graces and treasures and which seems to have undertaken in forming you a chef d’oeuvre of its power by giving to the earth a perfect model of the great King; Heaven, I say, which makes visible in Your person a complete Monarch, wanted to produce at the same time workers capable of worthily representing You, and it has shed on the minds of these learned men such a penetrating enlightenment, [and does such that] their conceptions [are] expressed in a manner so rare and so extraordinary that I feel myself gently forced to make a portrait of Your Majesty’s portrait […].’