Marilyn in Art: The Essence of a Goddess 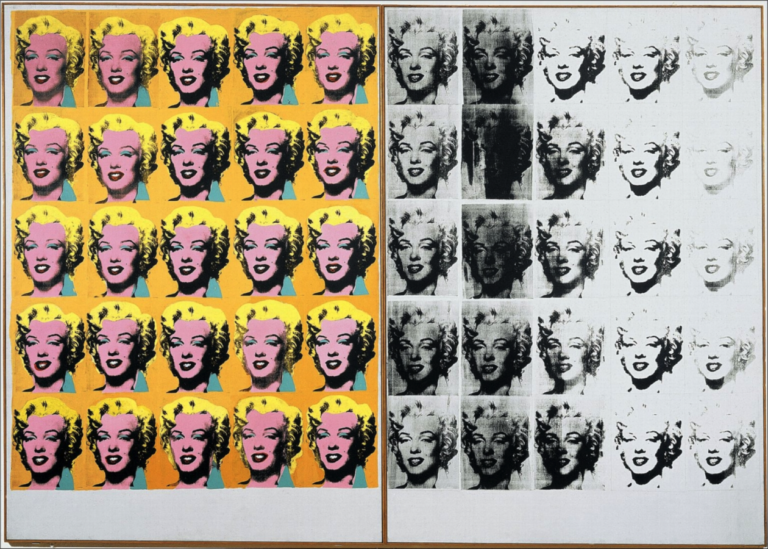 Marilyn Monroe: the most photographed woman in the world!  Glamour, cheesecake, publicity, nude, candid- she was captured on film and on fans’ cameras, by professionals, and by amateurs too who all were looking to find the essence of Monroe.

In terms of art, she also captured the imagination of artists, but what element of Monroe were they looking for? What was it about a Hollywood goddess that gave so many people so many creative moments.

Of all Pop Art, perhaps the most famous are Warhol’s silkscreen prints. In the months following Monroe’s death on 5th August 1963, he created over 20 screen prints, based on publicity photo from Niagara. Diptych (1963) is one such example:

The gaudy colours of Monroe’s hair, skin and makeup gradually fade through black and white to almost transparent.  Although Warhol did not claim to be making a statement in his art, it has been suggested that this fading technique represents her mortality.  However, with her image being recorded on film, our memory will never fade away and she will always remain as we remember her on screen, timeless; captured in a moment.

Another artist residing in the US, was fascinated enough by image to capture her essence on canvas while she was still alive.  Dutch born Willem de Kooning, who moved to the United States in 1927, was an artist whose style and technique brought him into Abstract Expressionism.

His 1954,  Marilyn Monroe, painting focuses on key aspects of Monroe’s image immortalised in such films as Niagara, Gentlemen Prefer Blondes and How to Marry a Millionaire.  Her blonde hair, wide blue eyes and full red lips are prominent.  The redness of her dress is also apparent here and the fluidity of the brushstrokes certainly remind us of the way she moved on screen, whether dancing or walking.  There is an interesting film fact from Niagara in that the longest continuous shot of someone walking away from the camera is from this film, when Monroe’s murderous wife walks away from her husband’s dead body and the camera holds her swaying walk for a full 116ft of film!

Rosalyn Dexler, novelist, artist, screenwriter and former wrestler, was interested in using collage in her art.  A photograph that appeared in magazines that showed Monroe running away from the paparazzi.  Dexler used a cropped shot showing one man, seemingly in pursuit of the anxious Monroe.  Although the photograph stated that the man behind Monroe was her bodyguard, it was based on a moment where the paparazzi had been responsible for the death of a journalist in a car accident as they pursued Monroe on her wedding day to the playwright, Arthur Miller.  By cropping to two figures, outlining their bodies and using a black palette, the title, Marilyn Pursued by Death, could not have been more apt.  Monroe’s problems with depression were well known and she had made numerous attempts at suicide over the years.  Despite yearning for attention, it was not always welcome and Dexler captures the fear that Monroe experienced through her working life.

Monroe’s fame and presence was not restricted to America.  In Britain, two artists in the 60s were also intrigued by her photographic image enough to use images as basis of their art.

Pauline Boty, the only female British Pop artist, created two paintings using Monroe as the central image. Boty was a fan of Monroe and was devastated at her death which inspire the painting Colour Her Gone (1962), in which Boty used an image from Town magazine from late 1962.

Surrounded by grey panels with swirls of colour, this image captures the movement that the sixties was bringing to culture and it asks us to consider Monroe’s role within this, had she lived.

The second painting, The Only Blonde in the World, came in 1963 and used the image of Monroe from Some Like it Hot as her character, Sugar Kane, runs to her destiny with no-good saxophone player, Tony Curtis:

This image puts Boty in the position of the ‘fan’, putting life into the black and white image from the screen. Here we have the bold, sassy Marilyn striding out in front, clasping her fur wrap around her as she heads towards the elusive love she sought all of her life.  The title also shows that aspect of Monroe that was her trademark: Think blonde, think Marilyn!

Legendary British Artist, Richard Hamilton was keen to explore a side of Marilyn not seen by her fans in his art. Despite being a screen icon and loved by millions, Marilyn suffered terrible depressions and low-self esteem.  When photographed, she would ask to see the proofs and would cross through the ones she did not like.  Towards the end of her life, she became more violent in her defacing, using lipstick, needles, anything sharp that came to hand.

In My Marilyn (1965), Hamilton used his familiar collage technique to display photographs taken of Marilyn that she decided must never be seen.  She playfully romps about on the beach in a bikini that revealed the natural body. In some ways, these damaged images make us feel that Marilyn, was in some way, trying to delete herself from the images and, perhaps, from life.  Something that finally occurred in 1962.

South African born, Marlene Dumas’s oeuvre is filled with paintings that seek to challenge our perceptions of identification. Her work is based around the photographic image that she adapts through her distinctive painterly style.  This painting came about while looking through a box of photographs and newspaper clippings, and the autopsy image of Marilyn fell out.  The most photographed woman in the world was not safe from the prying eyes of the public, even in death. Like Hamilton, Dumas uses the original image and adds to it. The blunt title, Dead Marilyn, does not pull any punches.  The screen goddess is dead and there is nothing that can change this.The blue hues replace the fleshy tones we are so familiar with. The decay reveals a truth that nothing lasts forever.

45 years after her death, Marilyn Monroe continues to inspire; her image timeless and her vulnerability displayed for those who knew her and came to know her through her films and photographs. The fact that she inspired art at such a high level allows us to explore an unseen essence of this screen icon.