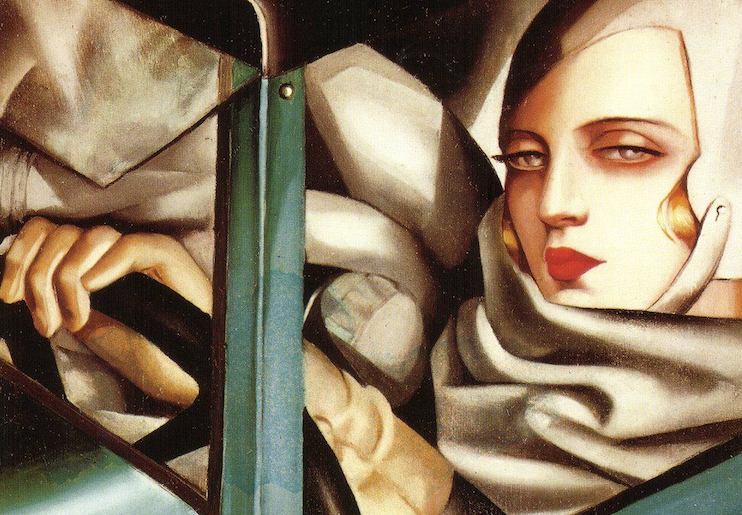 Heralded as one of the greatest Polish artists of all time, Tamara de Lempicka (1898-1980) painted the aristocracy in France and the United States in a distinct Art Deco style. After having painted many portraits of others, she created her self-portrait in 1929 titled Autoportrait (Tamara in a Green Bugatti). It was commissioned by the famous German fashion magazine Die Dame to go on the front cover. The artist presented herself as the epitome of late 1920s elegance and style as she gazes at the viewer from the comfort of an iconic green Bugatti.

Tamara Łempicka, better known as Tamara de Lempicka, was born in Poland in 1898 to a prominent Polish-Jewish lawyer and a Polish socialite. In 1911, she was placed in a boarding school in Switzerland but soon became bored with it and feigned illness in order to leave. As a result, her grandmother decided to take her on a tour of Italy which sparked her love for art. Moving to St. Petersburg in 1915, she fell in love with a lawyer named Tadeusz Łempicki and they were married by 1916. They continued to stay in St. Petersburg until 1917 with the start of the Russian Revolution, which saw Tadeusz wrongfully imprisoned. Luckily, Tamara had contacts that were able to free him from prison and they subsequently moved to Paris, where the rest of her family found refuge.

Her 21-year stay in Paris saw de Lempicka rise to prominence in Parisian high society and artist circles. At her sister’s suggestion, she decided to become a painter and subsequently joined both the Saint Petersburg Academy of Arts and the Academie de la Grande Chaumiere. Her first paintings created in Paris were of her family and neighbors, which she was able to exhibit in 1922 at the Salon des independents and the Salon de l’automne, to name a couple. However, it was in 1925 when she achieved her breakthrough, exhibiting her work at the International Exhibition of Modern Decorative and Industrial Arts, which later gave its name to the Art Deco style. This exhibition acted as a major turning point for de Lempicka, as the Parisian elite began to take notice of her works, as well as being featured in the popular American magazine Harper’s Bazaar. In 1927, she won her first major art award: first prize at the Exposition Internationale des Beaux Arts in Bordeaux, France, for her portrait of her daughter titled Kizette on the Balcony.

With de Lempicka’s growing popularity in Europe as one of the leading Art Deco artists, the German fashion magazine Die Dame commissioned her to create this self-portrait to be on the front cover of one of their issues. During a holiday in Monte Carlo, the female editor of the magazine spotted the artist and thus their collaboration began. Tamara is painted in a green Bugatti, a luxurious car at the time, in reality, she owned a small yellow Renault which she decided to replace for the self-portrait in order to convey a sense of wealth and high status. After all, she was now simultaneously playing the roles of both artist and socialite at a time when the Bohemian lifestyle was ever popular in the Roaring Twenties.

Painted in her signature Art Deco style, the artist faces the viewer as she drives the car towards an unknown destination. The influences of Cubism on this style are evident in the geometric folds of the cream scarf she wears, fluttering out to her right to create the illusion of motion. A chiaroscuro effect, reminiscent of the great Caravaggio, highlights the artist’s soft face and ruby-red lips that pout seductively against the darkness of the background and the driver’s wheel. Her body remains elusive and hidden beneath the scarf and gloves on her hands, giving all the more importance to her face as she gazes knowingly at the viewer, as if to let us know she is aware of our voyeurism yet is unwilling to give too much of herself away. Her beauty is likened to that of Greek sculptures through her alabaster skin and statuesque profile, giving us a better understanding of why she was such a popular and well-recognized figure in European art circles.

Whilst this painting serves to emphasize her beauty and artistic talent, it also brings forth the convergence between the escalation of modern technology and the emancipation of women in Europe and the US. In 1918, the artist’s home country of Poland gave women the right to vote, following the country’s independence after the First World War. As such, de Lempicka presents herself to the readers of Die Dame as independent, elegant, and most importantly: modern. This work shows clear references to artistic movements such as Futurism, which was highly influenced by the rise of modern technology, industrialization, and urban life. Female drivers were much less common in the early 20th century, due to cars being a luxury item and driving being a male-dominated sphere. By depicting herself as the driver of a modern luxury car, she emancipates herself from the “boy’s club” of cars and asserts to the readers of Die Dame that women, too, can break away from the harmful stereotypes associated with being a woman. However, they need not remove elegant attire and attempt to look more masculine in order to do so.