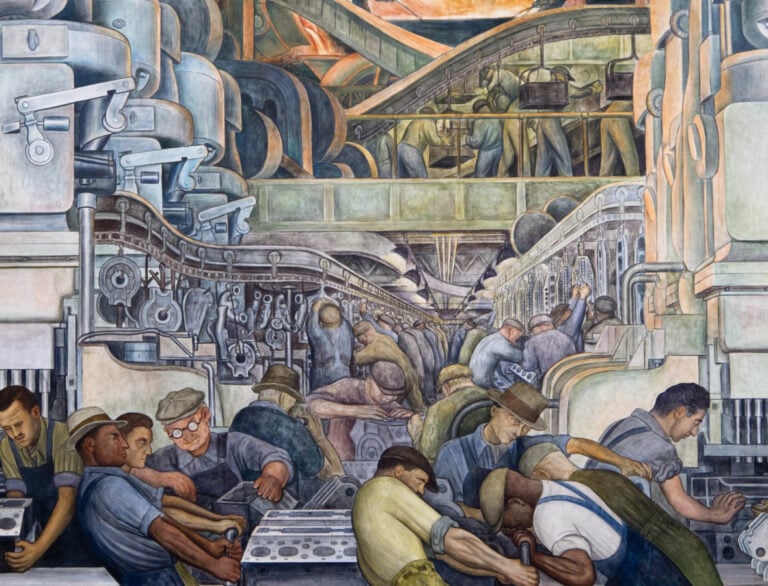 How do you get 10,000 people to visit an art museum on opening day during the Great Depression? You create a controversy, or at lease encourage one. Read what Diego Rivera did in Detroit!

In 1927, luckily before the Great Depression, the Detroit Institute of Art (DIA) was founded. Thanks to Henry Ford, Detroit was becoming a prosperous city and this helped the museum’s collections become impressive. In 1932, Edsel Ford, Henry Ford’s son, and William Valentiner, DIA’s Art Director, commissioned Diego Rivera to paint the Garden Court of the museum. He was to be paid $10,000 and his only guideline was to relate the history of Detroit to the development of industry. He accepted.

When Frida Kahlo and Diego Rivera arrived in Detroit, controversy was already brewing. The Great Depression hit Detroit especially hard and a few days before they arrived the Hunger March happened. Protesters demanding jobs marched to the River Rouge Plant where five people were killed and twenty were were wounded. This would be the same plant that Rivera would visit to create the sketches for his mural. With so few jobs available in the US, the public was not happy that a Mexican artist was given the commission. Other critics were concerned with Rivera’s Marxist beliefs.

Rivera’s Detriot Industry was finished in 1933 and covered all the available space in the Garden Court, totaling 27 fresco panels. Rivera mostly focuses on the automobile industry while also showing advances in medicine and technology. The frescoes are extremely detailed and symbolic, but back to the controversy.

One of the most controversial panels is a nativity scene depicting a child receiving a vaccine from a doctor and a nurse meanwhile three scientists work in the laboratory in the background. The animals in the foreground are the ones who provided the serum for the vaccines. Rivera believed that medicine would be the savior of the world. Church leaders were outraged.

Rivera also painted red, yellow, black, and white nudes to represent the diverse workforce and the raw materials needed for the automobile industry. Many considered these nudes vulgar and pornographic. In the panels that represent the automobile assembly line, workers of all races are working together. Again, this was controversial.

Even before the mural was unveiled there was considerable controversy surrounding it. To fuel this fire, the museum invited church leaders to view it in advance. The public outcry caused thousands of people to visit the museum on its opening day. As a result, people became passionate and interested in a museum that had waning support, leading the city to give the museum more funding. In the end, the murals were not destroyed and remain awe-inspiring to see.