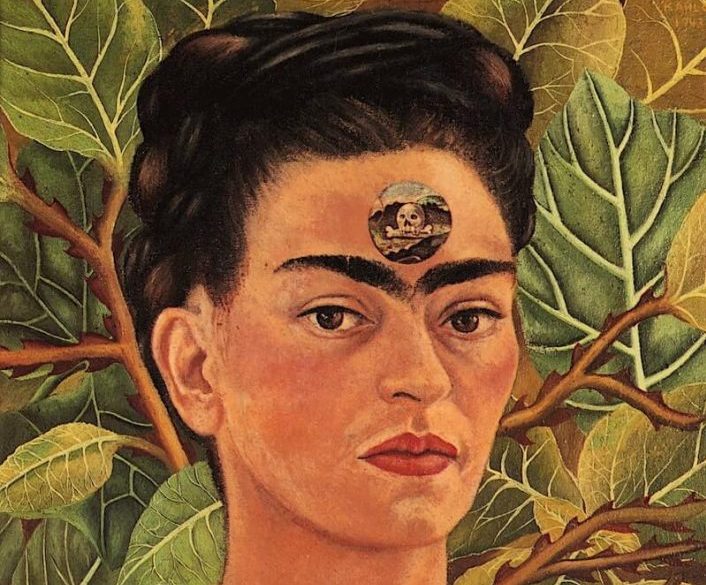 One of the most famous artists of the 20th century was Frida Kahlo. She became an international icon of our age, not only because of her paintings, but also because of her story, a story of independence, emancipation, freedom, and suffering.

The image of Frida Kahlo has become very popular in our society: we can find her face or artworks on colorful and bright t-shirts, earrings, cups, and all kinds of merch. But we can’t forget that her life and her artistic career were scarred by suffering from the very beginning.

Kahlo was diagnosed with minor depression, but experienced two major depressive episodes and suicide attempts during her lifetime… Her apparent dissociation and identity issues lead many researchers and historians to believe that Kahlo suffered from an array of mental illnesses – from post-traumatic stress disorder to bipolar disorder to dissociative identity disorder.

Let’s see what impact her turbulent life and mental health had on her art.

When Kahlo was six years old she was diagnosed with polio. This disease left her right foot and leg crippled, so she started hiding them with long trousers and Mexican skirts, which made her style immediately recognizable. Because of her limp, during her childhood, other children often bullied and isolated her.

But the tragic event that had the greatest impact on her life was a devastating trolley car accident. In 1925, as she was coming home from school with her boyfriend, the bus she was on hit a trolley car. Kahlo survived the crash, but with terrible consequences: an iron handrail impaled her through her pelvis, fracturing the bone, and she also fractured her legs, her ribs, and her collarbone in three parts.

The start of Kahlo’s artistic career coincides with her recovery from the accident. As she spent 3 months immobilized in a full-body cast, her father gave her his old paints, while her mother had a mirror mounted above her bed. This is the beginning of several of Kahlo’s self-portraits, as she stated:

Physical and mental suffering are strongly interconnected in her paintings; the accident had forever compromised Kahlo’s health and she had to have surgeries her whole life. The Broken Column, for example, shows us that she felt broken inside and outside as if the only thing that kept her together was the corset. Many spikes puncture her body, and her face is full of tears.

Without Hope represents a moment of Kahlo’s life when she felt really vulnerable: the lack of appetite due to the surgeries left her undernourished, so she had to follow a strict dietary regime. Here the artist seems trapped in her bed, weeping, while the wooden easel above her holds a funnel instead of a canvas. The food seems to go in and out of her body at the same time, and she stares directly at the viewer almost asking for help.

In this painting, Kahlo represents herself as a deer wounded by nine arrows. Kahlo painted it after a failed spinal surgery which just made her struggle more. As well as in many other artworks, the subject is in a desolate, empty landscape, which shows the artist’s sense of isolation and desperation. However, The Wounded Deer has other interpretations; some critics say that Kahlo also wanted to represent the pain of the second marriage with the artist Diego Rivera.

There have been two great accidents in my life. One was the trolley, and the other was Diego. Diego was by far the worst.

In 1929 Kahlo married Diego Rivera, a Mexican painter, and muralist, for the first time. She was 22, while he was almost 43. He had already been married twice and had four children. It was a passionate but troubled love story, full of lies and cheating. As Kahlo wrote in a letter, she thought that they were meant to be together, no matter what, and even if he kept hurting her, she just couldn’t stop loving him.

But in 1934 they eventually came to a breaking point: Kahlo became aware of the affair between her husband and her sister, Cristina Kahlo. Frida and Diego broke up and then divorced. A Few Small Nips tells of a news story; a man stabbed her wife several times with a knife, and said in court: “But all I did was give her a few small nips!”

Kahlo sees herself as the stabbed woman: Diego hurt her many times, but the last one was fatal. And, like the murderer, he doesn’t understand his fault and he is not willing to change.

After the divorce, the artist painted The Two Fridas. It’s a double self-portrait, where two versions of Kahlo hold hands. The first Frida is wearing a white European-style Victorian dress, and her heart is exposed and bleeding. The main artery connects the two women’s hearts, but it has been cut by the first Frida and stains her white dress. The second one wears a traditional Tehuana dress, her heart is intact and functioning, and she holds a small portrait of Rivera in her hand.

In this painting Kahlo shows us two sides of her identity; one is still loved by Diego, while the other is abandoned by him and left alone, bleeding to death.

Then Kahlo had new experiences with other people, but she eventually married Diego for the second time in 1940, as she could not forget him. They remained together until Kahlo’s death, in a crazy, passionate, deteriorating love that she was able to paint in all its power and cruelty.

Kahlo’s mental and physical health was also weakened by the three times she miscarried: the trolley accident and all the surgeries had compromised her chance of having children.

In her diaries Kahlo wrote:

Painting completed my life. I lost three children and a series of other things that would have fulfilled my horrible life. My painting took the place of all of this. I think work is the best.

The artist felt a deep void inside herself, which she tried to fill with her work. From a hobby she had while recovering, art became something she could have never lived without, and the only way to express the pain that was devouring her.

Kahlo made this artwork after her second abortion in Detroit in 1932: she represented herself crying and bleeding on a hospital bed, with the cold, mechanical city as a background.

There are six elements attached to her hand by red strings, which look like umbilical cords; the fetus she had just lost, an orchid given to her by Rivera, a hospital machine, a pelvic bone, an orthopedic cast of the pelvic zone, and a snail, which indicates the slowness of the abortion.

The mechanicalness of a perfect functioning city collides with the moving humanity of the artist’s pain. Kahlo’s body doesn’t work as she would like, and because of that, she feels more and more alone and isolated in a place that doesn’t feel like home to her.

During Kahlo’s life, death became something she often thought about, for obvious reasons. But it didn’t become something to despair about: for Kahlo, death was a reason to live fully, to experience everything possible.

Also, in Mexican culture death is an exhortation to enjoy life, as long as you can. And not for nothing, one of the most cheerful Mexican festivities is El Dia de Los Muertos (the Day of the Dead), a day when it is believed that dead people are going to visit their beloved ones.

That’s why in Kahlo’s mind death also means rebirth; death is just a path towards another form of life. The Dream depicts the artist’s relationship with death: Kahlo is sleeping soundly in her bed, enveloped by a plant that symbolizes rebirth. A skeleton lays above her canopy bed; it’s holding some flowers and many bombs are attached to its structure.

Kahlo actually had a skeleton above her bed; she said that it was a reminder of mortality, a way to remember that death could “explode”, arrive, at any moment, so you should always live your life the best you can.

When Kahlo painted Thinking About Death, her health was slowly deteriorating, and, as a consequence, death became something she kept thinking about. We see the same themes as in The Dream: the background is full of green leaves, a symbol of life, and death is depicted as a giant skull on an undefined landscape, in the center of her forehead. The artist’s gaze is not frightened or desperate: she looks resolute and ready to go.

Frida died of pulmonary embolism in her home, La Casa Azul, in 1954, and before passing away she said:

I hope the exit is joyful. And I hope never to return.

At the end of the day, Frida Kahlo was and wanted to be considered, a unique artist. Even if she met and was influenced by the Surrealism movement, she stated:

They thought I was a Surrealist, but I wasn’t. I never painted dreams. I painted my own reality.

She didn’t want to represent her subconsciousness, but to let her feelings, both good and bad, go. Art was not only a job for her, or a movement to be part of: art was therapy for Kahlo. It was the only way she could depict the pain she experienced, and what gave meaning to her tumultuous life.

Even in the painting that is considered to be the most Surrealist one of her career, What the Water Gave Me, we see many elements that we have already seen in her former paintings, like flowers, roots, the bed, or the skeleton. But all those symbols refer to actual events in her life.

What makes Kahlo a unique artist is a fact that she felt and accepted her suffering, and used art to transform it into something greater, something that could be useful to other people. Her art is universal and still loved today because it makes us understand that we are not alone in pain, that we cannot hide our problems from ourselves, and that, with Kahlo’s words:

At the end of the day, we can endure much more than we think we can.