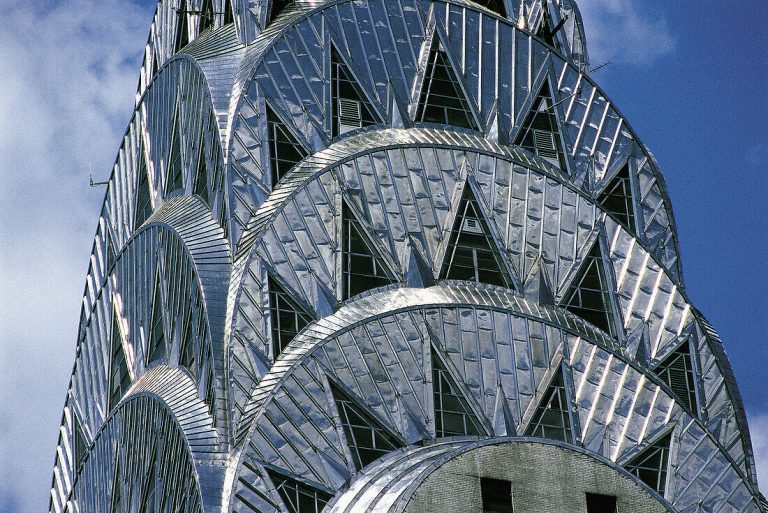 Art Deco is a global style of design that first appeared in Europe before World War I and flourished internationally in the 1920s and 1930s. The style takes its name from the 1925 Paris World’s Fair-Exposition Internationale des Art Décoratifs et Industriels Modernes, which showcased a new modern style of architecture and design that quickly spread around the world. However, the term only came into use in the late 1960s following important retrospective exhibitions at a time of revived interest in the style that continues today. It combined modern styles with fine craftsmanship and rich materials. During its heyday, it represented luxury, glamour, exuberance, and faith in social and technological progress.

In the US, the style was applied to a wide variety of uses, from The Empire State Building to the Hoover Dam to the Zephyr train that carried travelers across the country. Every detail, from every mode of transportation to fashion and accessories, from ocean liners down to the porcelain used to serve their dining room patrons to the jewelry worn by their elegantly dressed passengers, was designed in the Art Deco style. Designers and the public lost interest in the aesthetic after World War II, when tastes shifted to the more austere midcentury modern. However, interest in Art Deco was revitalized in the late 1960s and again in the 1980s.

Art Deco draws inspiration from several avant-garde artistic movements from the late 19th and early 20th centuries, including Cubism, Fauvism, the Vienna Secession, the Bauhaus, and Russian Constructivism. The style also features global influences including African tribal designs, the geometry and sculpture of ancient Greco-Roman architecture, the stepped pyramid structures and bas relief carvings of indigenous Mesoamerican cultures, and Egyptian motifs inspired by the 1922 discovery of King Tut’s tomb. As Art Deco expanded around the world, architects and designers from each country applied their own unique cultural references. Subsequently its interpretation in Shanghai was quite different from that in Melbourne, Mumbai, or Buenos Aires.

In France in the 1920s, rare and exotic materials were used by designers such as Émile Jacques Ruhlmann and Jean Dunand to create exquisitely crafted home furnishings for a wealthy and discerning clientele. Meanwhile, Art Deco architecture and design in the United States showcased modern technology including advances in lighting and durable new industrial materials like Bakelite, chrome plating, and stainless steel.

As the world sank into the Great Depression, President Franklin Delano Roosevelt’s New Deal initiatives helped put thousands of Americans back to work. This led to the construction of many famous landmarks such as the Hoover Dam and New York’s LaGuardia Airport. During the Depression, many artists were given government funding to create works of art to lift the spirits of the American people.

These Works Progress Administration (WPA) projects employed some 5,000 artists and writers. Many famous artists, including Jackson Pollock, Mark Rothko, and Ben Shan, began their careers through the support of the WPA. The WPA built 125,000 buildings and produced almost 475,000 works of art. Even today, more than 70 years after it ceased to exist, WPA works can still be found in New York and throughout the United States. Stylistic influences on architects and artists during the WPA included posters inspired by the bold typography of the Bauhaus and Constructivism, and murals inspired by Mexican artists such as Diego Rivera and David Alfaro Siqueiros.

Art Deco evolved during the Depression as well. Industrial designers streamlined everything from airplanes and locomotives to vacuum cleaners and pencil sharpeners. The sparsity of ornament, rounded edges and sleek horizontal lines that emphasized speed were in vogue. In architecture, the Streamline Moderne aesthetic was advanced by using newer and more economical building materials, emphasizing steel and glass and bold geometric forms, minimizing applied decorative surface embellishment.

Many of New York’s most famous and luxurious skyscrapers were constructed during the 1930s, signaling triumph over adversity and embodying the upward momentum of the American character. Some of the Art Deco icons of the New York skyline include the Chrysler Building, the Empire State Building, and 30 Rockefeller Plaza. These buildings, completed in 1930, 1931, and 1933 respectively, all incorporate the ziggurat setbacks typical of skyscrapers in this style.

While one can appreciate Art Deco architecture from street views, it is when visiting the buildings’ lobbies that their abundant motifs truly shine. The terraced crown and hood ornament gargoyles of the Chrysler building are iconic, and its triangular lobby, ceiling murals, and elevator doors are equally memorable. Meanwhile the lobby of the Empire State Building boasts an energetic zigzagging tile design on the floor leading to an aluminum relief of the building with rays of light emanating from behind.

Rockefeller Center is home to numerous examples of Art Deco in the form of sculptures, murals, and building design elements, including works by the multi-faceted American artist Hildreth Meière. It also housed an infamous mural by Diego Rivera that was destroyed by Nelson Rockefeller less than a year after Rivera stopped working on it because he refused to remove a portrayal of Lenin.

Next time you’re in New York, take a moment to explore one of the world’s great capitals of Art Deco. Look up, look closely, and discover surprising and delightful details you may never have noticed before. Visit the lobbies of great office buildings that were once symbols of American pillars of industry, commerce, and technology. The style became popular during the Jazz Age of the 1920s, when anything was possible in New York – and the city’s architecture continues to reflect this spirit.

The Art Deco Society of New York (ADSNY) was incorporated as a not-for-profit organization in 1982. ADSNY advocates for the appreciation, understanding, celebration, documentation, and preservation of Art Deco architecture, design, and culture in New York and around the world.