Heels Were Never Just for Women: Men in Heels 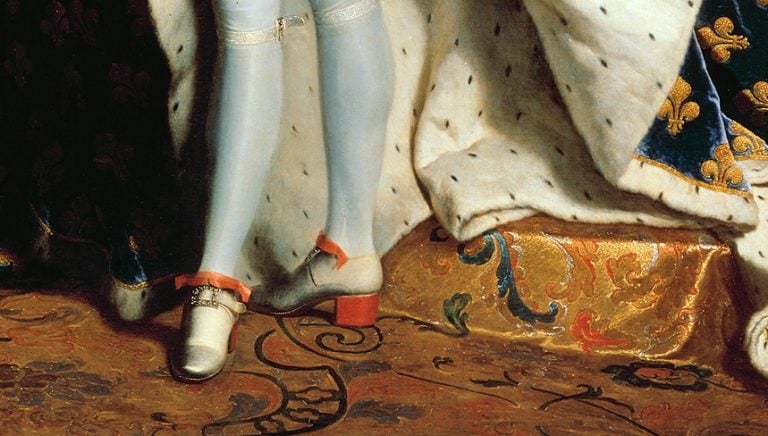 10 Awesome Pairs of Shoes from the Victoria & Albert Collection

What do the Persians, Louis XIV, and Johnny Cash have in common? Their heeled footwear. Quite appropriate as heeled shoes were originated, and worn, by men for centuries, something that surprises many people.

My art history students tend to chuckle when they see the Portrait of Louis XIV by Hyacinthe Rigaud. Not least is the ostentatiousness of just about everything, but then there’s the inevitable question about his preferred choice of shoe. But the Sun King set fashion trends and men’s heels were certainly one of the biggest. How did that come to be?

During the centuries when horses were the primary, or only, mode of transportation and integral to military campaigns, heels served very practical purposes. They helped keep feet in stirrups and provided balance when required to stand in the saddle. This is seen as early as 10th century Persia.

Bata Shoe Museum director & senior curator Elizabeth Semmelhack believes the style was adopted by European men in the 16th century after alliances were forged between various western European countries and the Persian ruler Shah Abbas (1588-1629) against the Ottomans. Shah Abbas had the largest cavalry force in the world and because of this association with soldiers and warfare, heels were seen as quite masculine.

The 17th century saw a prolific rise in men’s heels. Though they continued to serve their original purpose for riding, there was also one’s court style to consider. They became a sign of wealth and status. And if the heel was red, even better for the wearer as that indicated the king favored that person.

Notice that pose of Louis XIV – he’s (not so subtly) showing off his legs. In his younger days, he choreographed and performed his own ballet routines. He was clearly very proud of his legs even though the top half of the king doesn’t quite match the bottom half, but semantics, right?

Coinciding with this new male trend were those women who had adopted more masculinized and militarized attire. This included shorter hair, accessories like pipes and weapons (as one does), and, as is believed by Semmelhack, the inclusion of heels.

18th Century and the Gendered Split

The advent of the Enlightenment in the 18th century saw the elaborate heels for men begin to wane. The more intellectual and sensible individuals (read “men”) didn’t have time to consider their footwear. They were too busy being clever and rational. Leave that to those who didn’t have anything else to worry about (read “women”). Men’s shoes became squarer, more sturdy and practical, in order to distinguish from feminine shoes. Women’s shoes became smaller and narrower with a more pointed heel.

The century progressed and the dramatic split between the genders, and their shoes, continued. Men wanted to distance themselves from styles that could be considered feminine – a trend that would continue for subsequent generations (with a brief break in the 19th century for pantaloons).

The Latter Half of the 20th Century

Heeled shoes for men began making a comeback in the mid-20th century. The Beatles popularized their own version of the Chelsea boot in the 1960s. David Bowie in all his incarnations wore a variation of heels. The late 1970s brought disco and what came with that? Broad question but the answer I’m looking for is “heels for everyone.” Those sweet, sweet platforms.

There was a range of artists who wore them, KISS, most famously and as Semmelhack points out in the podcast Dressed: A History of Fashion episode on men’s heels, it actually promoted masculinity.

[…] structurally the shoes show no borrowing from the female wardrobe…They were instead reclaiming a type of footwear worn by men generations earlier. And I think that it was most specifically those characters […] who were seen as hypermasculine, such as rock stars, and imaged with all these female groupies that were the ones who took this to its greatest extreme. But you did also see it in disco and saw it in blaxploitation films and all of these sort of models of hypermasculinity and, to be fair, a sort of broadening concept of who can be hypermasculine, I think, was in part in response to the women’s movement and an attempt to grapple with what did it mean to be a man in a changing world?

One kind of heeled shoe that withstood the alleged feminization is the cowboy boot. As with their Persian shoe predecessors, cowboy boots work the same way, helping feet stay in the stirrup. But as we roll into the mid-20th century, they were no longer just for cowboys, they also made a fashion statement. The allusion of a cowboy is one of an outlaw, rebelliousness, someone who plays by his or her own rules. Even when they’re on the right side of the law, there’s an attitude, like Matt Dillon in Gunsmoke. James Dean and Johnny Cash, the epitome of rebellion, wore them.

Who else wears them? Those iron pony riders: motorcyclists.

Moving ahead in the 20th century, think about Slash in the 1992 November Rain video. Who can forget him walking out of the church into the desert, wailing as his long locks were blowing in the wind? Those cowboy boots he wore as he climbed atop Axl’s piano were a staple in his wardrobe. Slash was just one of the many hair metal rockers of the 1980s who sported them.

Bringing Heels Back into the 21st Century

As people begin to feel more comfortable expressing their authentic selves, we see heels no longer confined to gender. Heels in various styles and types, including stilettos, are now made in a range of sizes and available to all.

Enjoy your heels, everyone!

Men in Heels: a His (and Her) Story: an interview with Elizabeth Semmelhack featured in a podcast Dressed: The History of Fashion, May 28, 2019. Accessed 23 Jun 2021.