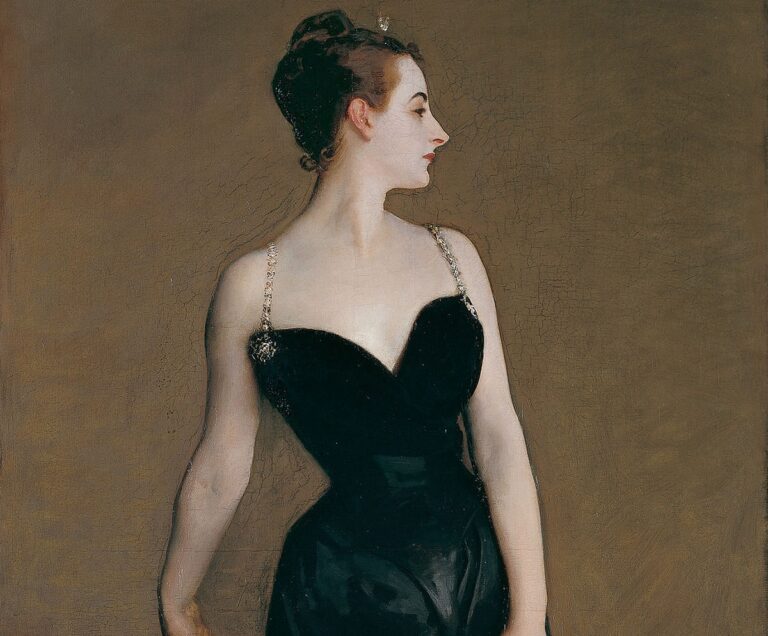 Happy Birthday, John Singer Sargent! If you were alive, you would be 166 years old! The world has changed substantially since 12 January 1856, however your legacy has stood enduringly. You are still considered the leading portrait painter of your generation. The late 19th and early 20th centuries never looked so glamorous as when captured by your brush! You depict ladies so elegantly, and gentlemen so confidently. The grand manner suits them and it suits you! In celebration of your birthday, let us explore a Sargent masterpiece. Let us explore Madame X.

John Singer Sargent painted Madame X, and displayed it in the Paris Salon of 1884. When it was revealed to the observing public it caused a scandal due to the subject’s personal notoriety and painterly indecency. Madame X is essentially a portrait of Virginie Gautreau, a woman known for her exquisite beauty and notorious love affairs. The painting was a dramatic setback for both Sargent and Gautreau due to its extremely negative reception. The public hated it! It was a brazen image of a brazen woman. Indecency should not be flaunted in the face of the decent public. Have we become so low as to praise and showcase our amorale elite? The public did not think so, and both Sargent and Gautreau suffered as a result. Sargent permanently withdrew from his Parisian artful circles and headed to London. Gautreau temporarily withdrew from her Parisian polite circles and headed to Brittany.

Madame X depicts Virginie Gautreau as a slender woman with alabaster skin, auburn hair, and a slender figure. She wears a very fitted black satin dress accentuating her svelte pale body. The low neckline emphasizes her round bosom, the small bodice highlights her petite waist, and the draped skirting showcases her curved hips. Virginie Gautreau boasts a perfect hourglass figure, and her black satin highlights the beauty of it.

Virginie Gautreau stands in an empty space with only a table implying she stands in the interior room of a studio or house. Virginie leans ever so slightly with her right hand clutching the edge of the table.  Her left hand holds a black fan matching the colors of her dress. A slight glimmer also appears on her ring finger. Perhaps this dash of metallic shine implies a wedding ring? Virginie Gautreau was married to her husband Pierre Gautreau, a wealthy French banker. However, in some of her more colorful moments, Madame Gautreau did not behave as a married woman should, especially the wife of a prominent financial gentleman.

Virginie Gautreau was of French Creole descent, and was born in the United States. Immediately following the American Civil War, she and her family emigrated in 1867 to France where she lived the remainder of her life. Virginie was a sophisticated woman who spoke both English and French, was educated in Paris, and who moved amongst the upper echelons of Parisian society. She had it all it seems, but she wanted more. She wanted the love and excitement that Pierre Gautreau seemingly did not provide. She would find this love and excitement through many adulterous affairs with gentlemen callers.

John Singer Sargent masterfully painted Madame X with the poise and haughtiness deserving the sitter. Virginie Gautreau turns her head sideways. Her balanced and proportionate features delicately seen in profile. Her beauty is undeniable. Her skin is aristocratically pale highlighted by the purple foundation Virginie famously wears. Her ear, however, is red and unadorned. It does not have the white powder adorning the rest of Virginie’s body. This simple detail highlights Sargent’s genius as a society painter by revealing the hidden and true Virginie beneath the displayed and contrived Virginie. Virginie’s ear shows her true blood-infused skin, the skin of a real woman hidden behind the pale maquillage of aristocratic display.

Adorning Madame X is a small crescent tiara atop her head. It is a small detail, but it is significant in its presence. Historically a small crescent tiara represents Diana, the Roman goddess of the hunt, the moon, and nature. Diana was one of the three virgin goddesses amongst the Roman pantheon, and therefore was celibate and chaste. Diana’s untouched body is a dramatic contrast to the frequently touched body of Virginie Gautreau. Why did Virginie choose to align herself with a goddess so different in sexual attitude? Perhaps it is because Diana was always unattainable by suitors? Many myths surround potential suitors, like  Actaeon, trying to deflower the Roman goddess but always having dramatic failure. It is possible to believe that Virginie Gautreau wanted to have the same magnetic attraction but with perhaps dramatic success for her suitors. Virginie enjoyed being admired and desired. She was a woman who loved being loved.

When John Singer Sargent originally painted Madame X he shocked society with one detail no longer visible in the painting. Originally Madame X was titled Portrait de Mme *** which means it was the portrait of a living, breathing, but unidentified woman. This made the painting seem very current and living in the moment.

Portraits of identified and unidentified individuals have been a backbone of the artistic tradition. However, when the subject is morally loose and implies it through her attire, then issues arise. The diamond studded straps on Virginie Gautreau’s famously black dress sit solidly and respectably on her ivory shoulders. However, this was not always the case. When John Singer Sargent originally painted Madame X the right strap was off her shoulder and laying slack loose against the side of her right arm. The bodice appeared unsupported and could believably slip down her body. Virginie Gautreau appeared in a state of undress before the prying eyes of the public! This was no mythological goddess, heroine, or martyr in a state of undress. Such a subject would have been academic and respectable. No, shown here is the clearly identifiable wife of a prominent businessman in a state of undress, and it was too much for the upright public and Salon to handle.

In reaction to the slurs and comments,  John Singer Sargent repainted the right shoulder strap to be firmly and unquestionably respectable. It appears solid and holding the bodice upright. However, the attempt was too late. The damage to the artist’s prominence and the sitter’s character had already been done. She was a harlot, and he was a harlot’s painter. They would be scarred from the experience for years.

With all of the scandal, and eyebrow raising that Madame X caused; why would this be the piece selected to celebrate John Singer Sargent’s birthday? It is because it is one of the most fascinating portraits he ever painted with the most technical virtuosity. With the stories placed aside, the portrait still shines for its professional skills. It is beautifully painted with the subtle nuances of shadows amongst Virginie Gautreau’s skin and dress. The rich brown background provides a sharp contrast to the cool composure of Virginie. The symbolism of Diana, the perfected poise, and the Spartan adornment all add to the grand manner John Singer Sargent achieved in his later portrait paintings. Madame X was a turning point in Sargent’s career and life. It showed him what he could achieve and what he could not challenge. Madame X is a painting of masterful skill. This is a Sargent masterpiece. This is Madame X.