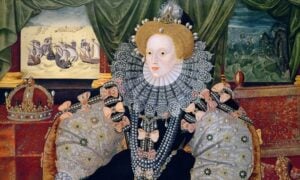 Queen Elizabeth I (1533-1603) was the only surviving child of King Henry VIII of England and his second wife Anne Boleyn. Being a girl was hard enough in the face of Henry’s desperation for a son and heir, but after the annulment of her father’s marriage to Anne and the subsequent execution of her mother, she was also declared illegitimate. After a turn of fate, she became a queen and now we know Elizabeth I from many exquisite portraits.

Elizabeth was neglected for many years and was brought up away from court at Hatfield House. Here, she received a reasonable education. However, it was Henry’s sixth and final wife, Katherine Parr, who took it upon herself to educate the young woman. Katherine did so as thoroughly as befitted a princess of the realm, to include – unusually – the art of public speaking. The portrait below of Queen Elizabeth I as a young princess shows not only a girl dressed in appropriately rich fabrics and jewels, but also a rather thoughtful, learned, and composed young lady. A young lady who is preparing for a future that she is not yet fully aware of.

Upon the death of Henry in 1547, Elizabeth found herself living in the household of her stepmother. Despite the problematic few years still to come, during which there were three accessions to the throne – her younger half-brother Edward in 1547, Lady Jane Grey in 1553, and almost immediately after that her older half-sister Mary also in 1553 – she finally came to the throne herself in 1558, aged twenty-five, where she remained for the next forty-four years. The painting below, known as the Coronation Portrait, depicts Queen Elizabeth I sumptuously draped in the finest cloth of gold (previously worn by Mary I). She holds an orb to symbolize Godly power and a scepter to signify temporal power and sovereignty. Of course, she also wears the crown.

Elizabeth’s rule was characterized by the cautious handling of political, foreign, and religious affairs. There was also an overall sense of fairness and tolerance. Of course, her reign was not without its problems: the events surrounding the plots of Mary Queen of Scots – the Babington Plot in particular – resulted in the trial and execution of Mary by Elizabeth (1586-7).

Another key event in the reign of Elizabeth I was the defeat of the Spanish Armada in 1588. Shortly after this, the Queen delivered one of her most well-known speeches to troops at Tilbury. This increased her popularity among her people, turning her into a living legend.

Below is one of three versions of the Elizabeth I Armada Portrait, in which the Queen is unusually set in a maritime context. Two different stages of the Spanish Armada’s downfall are depicted in the background to the left and right. The Queen’s back is turned against the dark, stormy seas of the right-hand scene. Her gaze is towards the light, echoed in the many suns embroidered upon her sleeves and skirt. Her hand rests on a globe, symbolizing her strength and dominion over the seas, and a crown sits above that representing her obvious power and status as monarch. Pearls symbolize chastity and female associations with the moon. The overall picture is one of radiant female strength and infallible royal authority.

Elizabeth was also responsible for stabilizing and reinstating the Church of England. She removed the Pope as its head and instead became its Supreme Governor herself. She introduced a new Book of Common Prayer and ensured that an English translation of the Bible became widely available. Elizabeth also saw to it that public worship was conducted in English rather than in Latin.

One of the most important portraits of Queen Elizabeth I is the Darnley portrait of c.1575. It is believed that this was one of few portraits that were painted from life. The face of Elizabeth as depicted here became the template for many other representations of her afterwards.

One of the most celebrated aspects of Elizabeth’s monarchy was the fact that she refused to marry, even when great pressure was placed upon her, such as by her own government. As a result, the association of the “Virgin Queen” became synonymous with her success as a monarch. The result was a cult-like status in which Elizabeth was held up as a paragon of unrivalled majestic and female purity.

Below is the Ditchley Portrait of Queen Elizabeth from c.1592. Here she is depicted bathed in light, all storms and darkness behind her, astride the world. This painting was commissioned by Sir Henry Lee, who was the Queen’s champion from 1559 to 1590. The impression is once again of absolute power and perfection. However, this time the face reveals perhaps a little of the aging that would normally be associated with a woman of sixty years. Here Elizabeth is shown in a youthful light – her skin flawless, her bodice low cut, her stature upright and slender – yet there is a hollowness to her eyes. Perhaps it is the Netherlandish will to paint realistically that revealed this detail where other artists may have been tempted to gloss over what, by now, must have been obvious signs of aging.

The Ditchley Portrait was followed only a few years later by a painting that has only recently been authenticated (2010-11), also attributed to the school of Marcus Gheeraerts the Younger. Below, dating from c. 1595 is an image of Elizabeth that would almost certainly have been disapproved and most likely banned. This version of the Queen is rather more factual that fantastical. That is to say, it clearly shows the process of ageing in the lines advancing across her face, the forming of jowls, and sallow discoloration to her complexion. Still, there is grace to her demeanor and that certain, bright composure that can be seen in the early portrait at the beginning of this article remains with her. During her long lifetime and exceptional reign, Elizabeth I was subject to no one. However, eventually, no matter who we are, we all become subject to the passage of time.

Agnolo di Cosimo (1503-1572), known as Bronzino, was an Italian Mannerist painter. He lived and worked in Florence and became the court painter of...