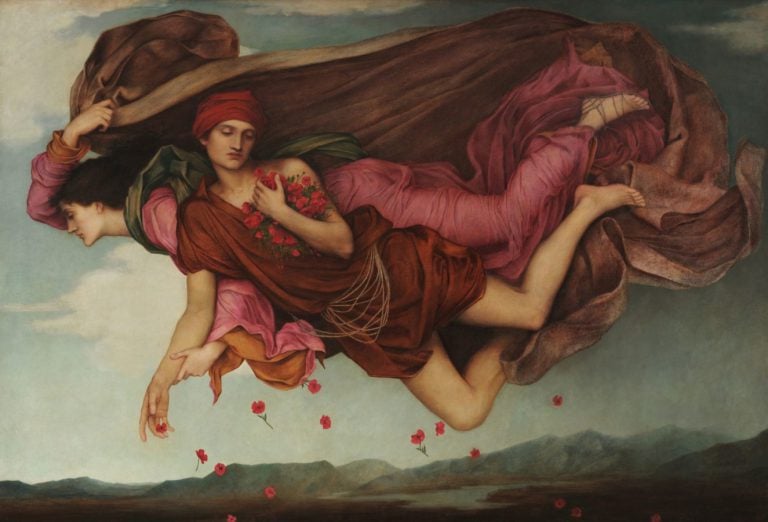 Al Green famously sang Let’s Stay Together but artists are notorious for tempestuous relationships that end badly. But hey, it’s Valentine’s Day –  so let’s look at some famous artist couples who make us believe in true love!

Described as two of rarest spirits of their age, both Evelyn and William De Morgan were established and highly rated artists. An ideal artist couple, they were devoted to each other and to social reform. They campaigned alongside pacifists, spiritualists, and suffragettes.

A Lifetime of Loving: Cedric Morris and Arthur Lett-Haines

Daring Modernists, Cedric Morris and Arthur Lett-Haines met in 1918 and instantly fell in love (although, Lett-Haines was married to a woman, Aimee, at the time). Witty and intelligent, they adored each other, and spent more than 60 years together. As homosexuality was illegal in England at the time, they spent a while living in more tolerant Parisian art circles. They finally settled in Suffolk, running an art school, the East Anglian School of Painting and Drawing. Their pupils included Lucian Freud and our next artist, Maggi Hambling.

United in Life and Death: Maggi Hambling and Victoria Dennistoun

Maggi Hambling and Victoria Dennistoun have lived happily together for 35 years on the Suffolk coast in England. Victoria paints under the name Tory Lawrence. Hambling is a controversial painter and sculptor who is obsessed with drawing the dead and the dying. In her defense, she said “why would you not? It’s a way of remembering them and keeping them alive.”

Instantly recognisable in their tweed outfits, Gilbert and George have been partners in life and art for over 50 years. They say they have no friends except each other – “it’s purer” and describe themselves as “weird normal.” This one of the most famous artist couples unashamedly produce art which explores sex, money, and religion.

An artist couple who met at the famous Bauhaus school in Germany. Anni Albers (Anneliese Elsa Frieda Fleischmann) studied textiles, meanwhile Josef Albers studied stained glass. However, both were obsessed with pattern, color and geometry. When the Nazis closed the Bauhaus, this couple fled to America where they continued their pursuit of radical artistic practices together, at the Black Mountain College, then at Yale University. They traveled regularly, across the USA, Mexico, and Europe.

Natalia and Mikhail met at the Moscow School of Painting, Sculpture and Architecture in 1900. Questioning the very notion of reality, they started the Rayist (or Rayonist) Movement in 1912. An abstract painting style, expressing energy and movement, it explored the effect of light rays on landscapes. Believing that art can revolutionize life, they embraced new ideas and each other with passion.

Photography, journalism, writing, and political activism were the lifeblood of these two artists. They met at just 15 years old when Moore’s widowed mother married Cahun’s divorced father, so they were step-sisters as well as lovers. Marcel Moore (previously known as Suzanne Alberte Malherbe) and Claude Cahun (previously Lucy Renee Mathilde Schwob) became lifelong companions, rubbing shoulders with Andre Breton and Man Ray in Surrealist Paris. They then moved to Jersey and fought the Nazis, their romantic and creative collaboration lasting a lifetime.

Ensconced in their countryside tower, overlooking green meadows, these two artists seemed the epitome of conventional British country living. But nothing could be further from the truth. Born in Geneva, but raised mostly in France, Charles Ricketts was a painter, lithographer, art critic, and theater designer. He met the painter Charles Shannon when he was just 16 and they became lifelong partners. They worked together on printing projects and their literary, artistic circle included Oscar Wilde and Aubrey Beardsley. In 1929 Shannon was tragically injured while hanging a painting, suffering irreversible brain damage. Ricketts sold some of their vast collection of art to care for his lover, but grief and overwork led to his death shortly thereafter.

This legendary friendship was also a love affair, although some academic texts seem loathe to explore that angle. Charles Demuth was one of the first American artists to be receptive to modernism, later moving on to Cubism and finally to Precisionism. Robert Evans Locher was one of the leading modern designers of the 20th century, a Vogue illustrator and a college professor. Demuth is perhaps best known for his frank watercolor depictions of the emerging American gay scene.

Part of the Ulster painters set, the still-life and abstract paintings of William Scott are instantly recognizable – pared down images of domestic essentials like pots and pans. Abstract form and color are the point here. Uninterested in the glitz and glamour of the art world, this couple concentrated simply on the art itself. Mary Scott’s paintings and sculptures are less well known, but their simple celebration of the domestic is evident.

Certainly not conventional, but definitely worth a mention, this relationship lasted a lifetime. A young Patti Smith met Robert Mapplethorpe in 1967 on her first day in New York City, when she was a poor struggling musician and he an aspiring photographer. They created art together and both achieved incredible success in their respective fields. They lived together in New York for seven years, their romantic relationship moving over time into a platonic phase. Patti has written movingly about their journey through love and friendship. They clearly respected and adored each other. Below is an extract from the last letter she ever sent him, in 1989, as he lay dying of AIDS. Sadly Robert died before he could read it.

Often as I lie awake I wonder if you are also lying awake. Are you in pain or feeling alone? You drew me from the darkest period of my young life, sharing with me the sacred mystery of what it is to be an artist. I learned to see through you and never compose a line or draw a curve that does not come from the knowledge I derived in our precious time together. Your work, coming from a fluid source, can be traced to the naked song of your youth. You spoke then of holding hands with God. Remember, through everything, you have always held that hand, grip it hard, Robert, and don’t let go.

The other afternoon, when you fell asleep on my shoulder, I drifted off, too. But before I did, it occurred to me looking around at all of your things and your work and going through years of work in my mind, that of all your work, you are still your most beautiful. The most beautiful work of all.

Google famous art couples and usually the same old cliché’s come up. Alcoholic Jackson Pollock and the long-suffering Lee Krasner, the hermetic claustrophobia of Josephine and Edward Hopper, philanderer Pablo Picasso and Dora Maar, Picasso and Françoise Gilot, or quite frankly, Picasso and just about anybody.

But these stories are not the stuff of romance. Infidelity, control, and cruelty are not ingredients for a successful relationship. We need to challenge the idea that the tortured artist is allowed to behave badly. I hope we’ve proved dialogue, collaboration, shared experiences, and genuine partnership can also create great art?