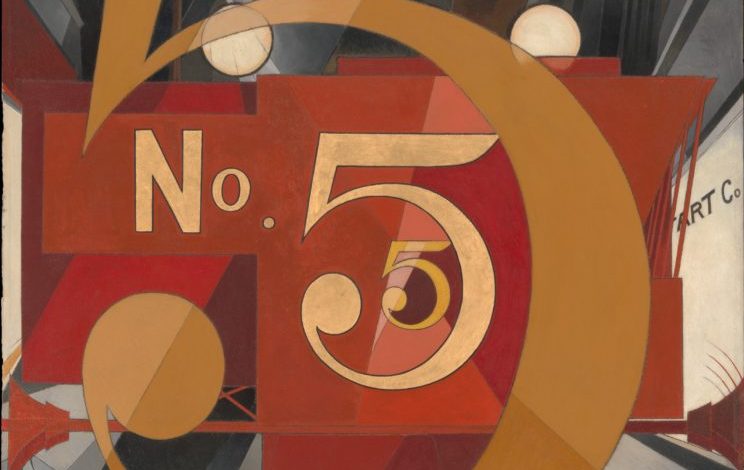 This one-sentence poem, by the American poet William Carlos Williams, was the inspiration for an incredible abstract work by American artist, Charles Demuth, I Saw the Figure 5 in Gold (1928).

Among the rain
and lights
I saw the figure 5
in gold
on a red
firetruck
moving
tense
unheeded
to gong clangs
siren howls
and wheels rumbling
through the dark city.

Demuth and Williams were good friends and the story goes that Williams was walking along Ninth Avenue in New York, one evening when the clanging sounds of a fire truck broke through his revery.  Turning, he saw the number of the red truck speeding away.  Williams, who at the time was creating poems that were precise, clean, devoid of metaphor, concentrated on the sight and sound of this common event to evoke the speed and anxiety that the sound of sirens can create in a person.

This lack of figurative language matched the style of the Precisionist painters, of whom, Charles Demuth was a leading exponent. Works such as After Sir Christopher Wren, 1920,

And My Egypt, 1927 used such devices as, rectangles and triangles to portray light diffraction and geometric shapes for buildings. In scenes devoid of human interaction, the Precisionists celebrated the new and the bold as the 20th century progressed.

In this 1928 work, Demuth concentrates on the number designation of the fire truck as speeds away from our viewpoint. Oil, graphite, ink, and gold leaf on paperboard combine to create a vibrant abstract. The circular elements of the number are reflected in the lights on the back of the truck and the repetition of the gold ‘5’ creates a sense of depth. Elements of the fire truck are still obvious: the axle, the lamps, the ladder and the abstracted forms of the rain, represented by grey streaks across the canvas, cause the red of the truck stand out even more.

Not only did Demuth use ekphrasis: the interpretation of poetry in art form, as a way of immortalising his friend’s work, he also placed the poet’s initials ‘WCW’ and the name ‘BILL’ in the painting in honour of their friendship. What is interesting is that the two works are now symbiotic – to understand the painting, one needs to hear the poem; to visualise the poem, the painting allows the viewer to experience what Williams did on that rainy night in New York.